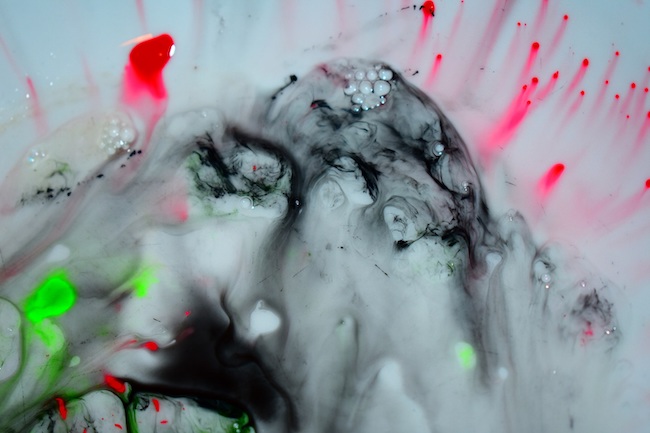 With the arrival of the first photographic techniques, art felt the need to defend itself, to distance itself from the faithful reproduction of reality in order to give life to a new and unprecedented language that could in no way be represented by that photography capable of bearing witness to everything that was in front of one’s eyes. Since those times, however, new technologies have taken giant steps to transform the limits and join two completely different approaches that have managed to find a meeting point. Today’s young protagonist has set himself the ambitious goal of using the camera as a brush capable of expressing emotions and sensations.

Martin Luisi, an Austrian born and raised in Vienna, began his artistic career in the most classical way, as a painter, encouraged by his father to whom he was very attached; the approach to the abstract was a natural inclination that made it impossible for him not to follow it. His feelings, his inner motions found a more instinctive outburst by approaching that Abstract Expressionism that so much freedom brought to the art of the twentieth century, succeeding in imposing himself in an academic world still rigid and not predisposed to accept new languages if not fitting into existing schemes and definitions. The courage of Jackson Pollock and the New York School to oppose the system and to be indignant at the exclusion of their movement from the Metropolitan Museum of Art‘s project of an exhibition on contemporary American painting, was an important step towards the acceptance of the innovation they had brought. The need to approach abstract language had emerged at the beginning of the twentieth century to create that split, that distance aimed at emphasizing the superiority of the artistic manifestation and the creative act from the images faithfully reproduced by the cameras, which, however, could not convey the intention, the soul that escaped from an artwork. But the need to give life to something that, on the basis of the knowledge of the time, would never have been achieved by the innovative technique of image reproduction induced a huge group of artists to detach themselves from figuration in order to let the encounter between colours, indefinite forms that were able to envelop and fascinate the observer, inducing him to study and understand its meaning.

Never would it have been possible to predict, in that era, when rapid progress would also allow photography and subsequent technology to evolve to such an extent that they would be able to constitute a new and unprecedented way of making art, through the digitization of images but also new creative approaches that allow artists to manipulate shots to shape the result as many do with colors and brushes.

Martin Luisi chooses to approach the technique that has become his hallmark in the current phase, at the end of a journey, therefore not as a starting point, thus creating a wonderful synthesis between technological manipulation and artistic instinct to transmit, or rather immortalize, the indefinite emotion of the moment. His fluid works seem to be on the point of dissolving, as if that juncture, that sensation of an instant was about to change and modify itself according to the Heraclithean law of “everything flows, everything is transformed”, preventing reality from remaining the same as itself; rather more, for Martin Luisi, the movements, the transformations represent an indispensable path, fundamental for getting to know oneself more deeply, but also for confronting the outside world, the one that leads us to open ourselves to a different way of looking at reality.

Works such as Seelenübergang (Transition of soul) and Schwimmende Dorade (Floating sea bream) represent the artist’s requirement to question himself about the need to accept change as a fundamental part of the path of growth, but at the same time also the acknowledgement that circumstances can lead to unimaginable situations until just before, represented by that floating in the sea of life, which allow to reach awareness that, without those specific slow or sudden movements, could never be reached.

And yet the need to conceal the essence behind veils, masks, curtains, seems to be a constant in Luisi‘s works, a cognition that often, even though after having known and come into contact with one’s true nature, the self-preservative tendency to want to protect prevails over the instinct to show oneself, or perhaps instead it is the fear of not knowing oneself well enough accepting strengths such as weakness, to induce contemporary man to hide himself so as not to allow the depths to emerge to the surface, to the sight of all.

With regard to Martin Luisi‘s particular technique, it is not a question of a technological manipulation of the image but of real shots of moving fluids that the artist creates and prepares to obtain the result that his creative impulse suggests, therefore his is an authentic pictorial gesture that however immortalizes through a photographic shot, perfectly combining two worlds, two different ways of meaning expressiveness that do not necessarily have to remain separate. Martin Luisi has had numerous group exhibitions in Austria and Germany, is a member of IG Bildenden Kunst and the Professional Association of Visual Artists and has been awarded the International Artist’s Charter. In 2019 he exhibited in a group show in Miami where he had pubblic and collectors acclaim.