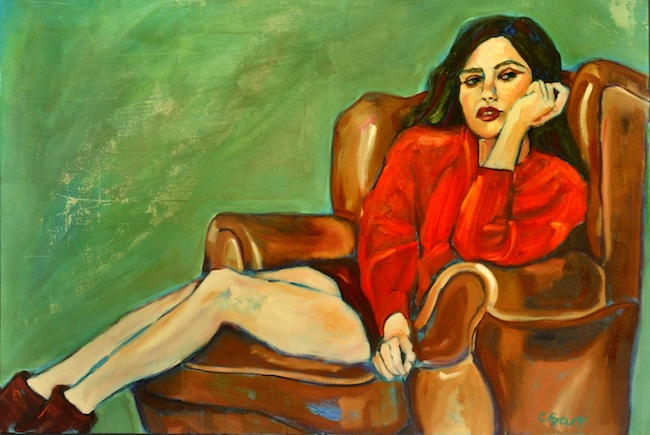 The ability to recount the deepest emotions is a common denominator among artists of every era, even more so for contemporaries ones who highlight how much in today’s society feeling is put in second place to appearance. The gap between the two opposite ways of being is the point on which the expressionist research of today’s protagonist focuses.

Multiethnic by genetics, born in Buenos Aires from a Cuban mother and Argentinean father, during her life she moved a lot for work and probably also for temperament, until she arrived in Paris where she currently lives and works; the encounter with art for her came late, at the age of forty, probably because it was necessary that her curious and eclectic nature absorbed experiences, emotions and sensations, before being able to put them on canvas. She had actually always love painting but her older brother’s natural talent in drawing had given her the feeling that she felt inadequate, not up to enter the artistic world and so she chosed to give up without even trying.

At a mature age, or better when ready to manifest her own interiority, she felt the impulse to resume the artistic path that had been interrupted, spontaneously approaching Expressionism for the marked tendency to prefer feeling, the sensation filtered by the artist’s individuality, to the detriment of all the colouristic and pictorial rules of other movements belonging to the same period in which the current was born, that is, around the first decades of the Twentieth Century. Unlike Impressionism, in which priority was given to objective reality to be reproduced in the most aesthetically beautiful way possible, focusing on light and the appearance of what was pleasing to the eye and portraying subjects and glimpses that described the joy of living, Expressionism rejected aesthetics, beauty, to give priority to sensations stripped of any filter, preferred to show the psychological and inner depths of the artist even if dramatic. Colour therefore becomes a means of telling, but much more often shouting, emotions otherwise unexpressed, through strong, aggressive, full, in some cases gloomy tones, as in the Nordic Expressionism of Edvard Munch, or more lively and dreamy as in the artworks of Matisse and Gaugin, always characterized by a strongly incisive sign. Cristina Barr draws on this style to express her philosophical thought on modern reality but also to observe with irony contemporary behaviours, those in which the essence is lost within the form to the point of no longer being able to distinguish the two parallel ways of being and behaving. What stimulates her more is to tell the comparison with an often superficial objectivity, in other cases instead looked at in a hasty way without going into what is hidden behind an attitude or a choice; and then the social issue, one of Barr‘s dearest themes, in which she highlights above all the delicacy of the natural world that is too often sacrificed in the name of a progress that leads man to forget the importance of protecting the environment in which he lives.

This last thematic group of canvases, called Futuro de un Pasado pluscuamperfeco, is perhaps the most visionary one, linked to the artist’s imagination, which hypothesizes a bumpy world, shocking for what it can lose but at the same time facing a possible rebirth, by virtue of man’s inherent ability to get up and find resources even where everything seems to be lost.

The artwork Pañuelos Verdes seems to describe a post-apocalyptic scenario in which the green of the veil worn by the woman in the foreground, itself seems to be a symbol of new options, of new possibilities to get out of the darkness and dust behind him and take a new path of hope told through his gaze, resigned but at the same time determined. Actually it was painted to put in evidence arentinian women’s figth for the right to choose for abortion, and they decided to wear green handkerchief as symbol of their protest. The works belonging to the group Je pose donc je suis, on the other hand, ironically mock the attitudes of many people who, with the advent of social media and smartphones by photos taken on every occasion, think they earn their slice of celebrity without having a well-founded reason; in these canvases Barr questions the importance of the image, how much the being is really silenced by an appearance that flattens and deprives the individual of that substance on the basis of which he can, deservedly in that case, emerge.

Delphine in Red (the work on the cover of the article) but also La peintre in her Art Studio and Sweet Bird of Youth, represent in full this cycle of works, in which the protagonists appear bored, but also winking, self-confident but at the end reassured by the distance, as if they had to conquer and show themselves to whoever is hiding behind the objectiv to whoever will look at that image; here is therefore Cristina Barr’s subtle reference to the loss of the human relationship to privilege the virtual one, where it is not necessary to bare oneself and take off the mask that one wears because nobody on the other side will be able to really look us in the eyes and read in the bottom of them.

Finally, the last thematic cycle, Cosa ‘e minas, is linked to prejudice, or rather to the somewhat superficial way in which men look at women considering them ephemeral, sometimes hysterical, sometimes exaggeratedly flashy, too worried about spending their free time between shopping and beauticians without actually wondering if that showing oneself doesn’t hide deep insecurities, a sense of revenge, a need for self gratification because in some cases no one else will. It is a deep and attentive look at contemporary society that of Cristina Barr, sure and ironic woman, desecrating but also sensitive, who had to face a deep introspective path to reach the artistic maturity that she currently feels as a second skin. From 2015 to today she has participated in many group shows in France, Argentina, the United States and Qatar, and is one of the artists selected for the international exhibition Lisbona Contemporanea, scheduled at the Atelier Natalia Gromicho gallery from 4 to 10 April 2020.