Home Lifestyle Lines and geometries to tell the intensity of an emotion in the...
Facebook
WhatsApp
Twitter
Linkedin 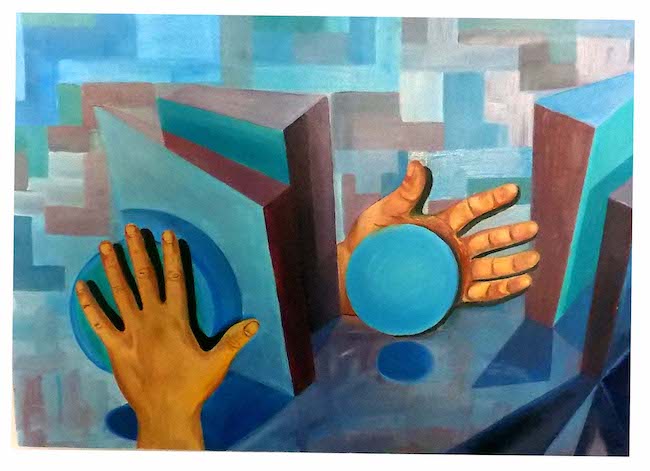 The pictorial approach of today’s protagonist artist starts from the desire to merge the order of geometry, the rigor of a well-defined scheme, to the inevitable tendency to emotiveness that can not derogate from the man, from that desire of remembering, and sometimes telling, an interiority that fails to fit within those same schemes which is very often she imposes to itself.

Alin Marius Buzatu‘s career in art has certainly been marked by a deep study of some of the most important artistic movements of the twentieth century: Cubism, Futurism and Metaphysics, which he was able to merge into a personal style in which the synergy between geometry and essence become co-stars of the messages that the artist wants to imprint on canvas. And yet, in some of his works, the pictorial trait is also similar to the Pop style, both for the distinctly full, lively and clean colours and for the bright and clear light with which he highlights the details of the icons, often negative figures of dancing women, through which he chooses to underline the concepts. Buzatu‘s works induce the observer to dwell on meanings, to wonder what is the inner cage from which the subjects want to release, what is the pattern from which they try to get out to find themselves different, new, regenerated; lines and geometric representations are more or less predominant according to the work and, without a doubt, also according to the emotion he wants to narrate. A memory, a lack, a search for one’s own identity, a romantic dream… here Alin Buzatu modifies the predominance of the schemes to define their impact on the represented moment.

In the background, to frame subjects, when he portrays still lifes, transforming geometric shapes into objects that are part of the overall image; the work Il silenzio (The Silence) is a clear example of how fundamental the floor is to highlight the abandonment of glasses, of a table on which, probably shortly before, there had been a domestic scene of conviviality, at the end of which the protagonists simply got up. The perspective dimension is modified, according to cubist way, in fact the walls behind the image in the foreground are too small, contrary to the classical rules on the proportions of depth, precisely to increase that sense of quiet and instant interrupted by the continuum of life, present in the center of the painting.

In Utopia, on the other hand, the lines are limited to the surface on which an amphora, a rose and two glasses rest, while in the background Buzatu infuses the softness of a dream of love that remains suspended halfway between the ideal chimera of happiness and the desire that something romantic can really happen, arrive and change everything.

The work Il riscaldamento globale (Global Warming), on the other hand, has a strong futurist imprint and geometry is dominant, but, despite the theme it deals with, there is no evidence of negativity in it, there is no evidence of concern precisely because of the use of full and lively tones chosen by Buzatu, almost as if to suggest that nature will somehow be able to adapt to changes and will turn into a welcoming place, giving the human being the chance to adjust, in turn, to the inevitable variations.

And again, in The shadows the base really becomes a scheme within which the women protagonists move like shadows, perhaps because they are trapped inside common places or rooted habits that give them the feeling of not being able to leave that room, and despite the open door, despite the lines pointing outwards, they remain there, in the reassuring certainties to which they are accustomed.

As motionless they are in the previous work as they become tending towards a new dimension, a new way of seeing themselves in the work Riflessioni (Reflections), in which geometry is transformed into a stimulus, an incentive to evolve, a springboard for exploring that which is not discovered is hidden beyond the known, beyond the safety zone which, in this case, is not a protective envelope but simply a point from which detaching oneself in order to evolve. So Buzatu tells of emotions, hides them behind objects, behind the geometric rigidity, perhaps to emphasize the difficulty of contemporary man to let go, to manifest what could be seen as weaknesses, so to be caskets to be protected from a reality not always welcoming, and yet, underlines Alin Buzatu, despite all, the intensity of what is felt in the inner world, can not evoyd to escape, apparently silent, and reveal suddenly, where you would not expect to find it.

This is what the work Emozioni (Emotions) tells us, about those masks, several, that individuals wear for the first time in their lives. Originally from Timisoara, a city in Romania, Alin Buzatu has lived and worked in Venice for many years, and it is precisely this city that celebrated him in his first solo exhibition entitled Prima e dopo (Before and After), an exhibition that took place at the Galleria delle Cornici, in the famous Lido di Venezia.