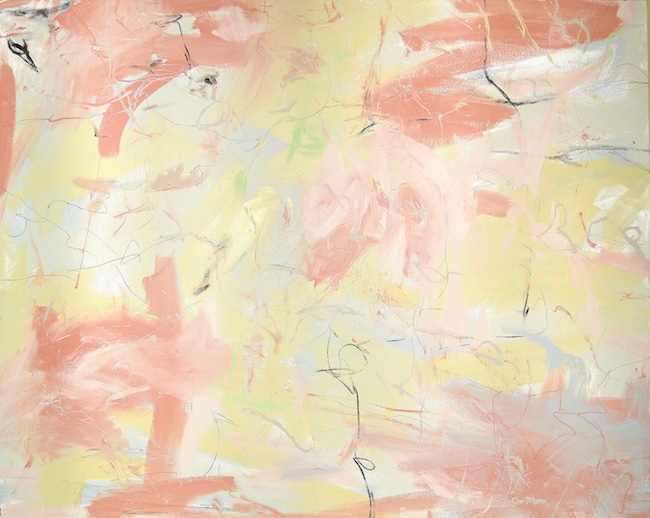 Many contemporary artists live their creativity in a balance between two ways of being, and therefore of manifesting, what they need to express; the dualism, the ambivalence between the most emotional and the most rational part often give rise to a synergy of styles that characterizes their distinctive sign. Today’s American protagonist finds a synthesis between mind and soul in an involving pictorial touch.

Don Moon, originally from Ohio, but who has been living in Florida for almost his entire life, reaches late the decision to devote himself completely to art and, when he does it, immediately begins to free his previously held emotional world, bringing to canvases the past professional experiences that lead him towards the use of materials of common use. In fact, his creative world is unable to stop at the emotional manifestation, but also feels the need to go further, to bring into his artworks parts of objective reality through which he can transform it into experience, in more direct contact with the concreteness of existence. The style, as ambivalent than synergistic, is a synthesis between Abstract Expressionism, for the pure manifestation of feelings and emotions that Moon feels the need to communicate, and Material Art, for the research of materials of daily or industrial use to be inserted in the canvas itself and become part of it, even amplifying its emotional impact. The material inserts, however, constitute a new experimentation, not bursting out of the surface but merge and amalgamate with acrylic colors or constitute the expressive basis on which manifesting the voice of the feelings that the artist perceives and then, as a result, narrates. The instinctive part moves on the level of memories, of moments lived in places of the soul in which Don Moon’s memory chooses to get lost, to let out the lyrical intensity that accompanied those same moments, inextricably linked to the people who were part of it or simply imprinted in the emotional treasure chest of the artist who feeds on those emotions to free his creativity.

The works Ava’s house, Edgewater and In the garden belong to the most intimate, most personal group of Moon‘s production, from which a deep bond emerges, an indestructible thread with everything that has been felt and experienced in those fragments of life. The other expressive part of this engaging American artist is instead linked to more philosophical and existential concepts, from which he starts to imprint on canvas his point of view and his personal, and therefore unique, answers to the questions that naturally and always man asks himself.

Question of optics and Sublime, tell of how Moon perceives, feels, those sensations using the colors closest to his way of being, thus revealing a serene nature, quiet, soft as tender are the shades he chooses, because life, seems to suggest the artist, does not necessarily have to be experienced with force and impetuosity, quite the contrary, very often the most harmonious and pleasant chords are revealed precisely following a slower pace, more open to the beauty of everyday life, to the ordinary that thus becomes extraordinary. In some cases a single work is not enough to observe the issues from the various facets that reality itself presents, so he creates series, real paths of investigation and involvement of the observer to induce him to find his personal point of view, stimulated by the artist but which without the interaction of the receiver would remain only questions.

Yet, despite his openness towards the most intimate and profound sensations, Don Moon is unable to contain his rational, curious part, the one that needs to go beyond and find a mediation between soul and mind, and he does so through careful research on the materials to be included in the work, materials that remain almost in silence, don’t burst out of the canvas in a manifest manner but seem to enter and create a link with the expression, almost as if the two forces can not separate from each other.

Adhesives, glues, plasters, industrial oils, graphic traces and aluminium plates of aircrafts make up the material part of his paintings, and give him the possibility of breaking down and reassembling the canvas until the result is the emotionally desired one, with the right impact, with the final form in which his gaze will be able to lose itself and feel satisfied. The musicality of his works therefore needs the concreteness of experimentation, the solidity of the material needs to agree and give life to a unique and melodic language that reveals Don Moon’s approach to existence. Since 2016, the year in which he decided to practice the artistic profession full time, he has taken part in group exhibitions in various cities in the south of the United States and has several personal exhibitions to his credit.