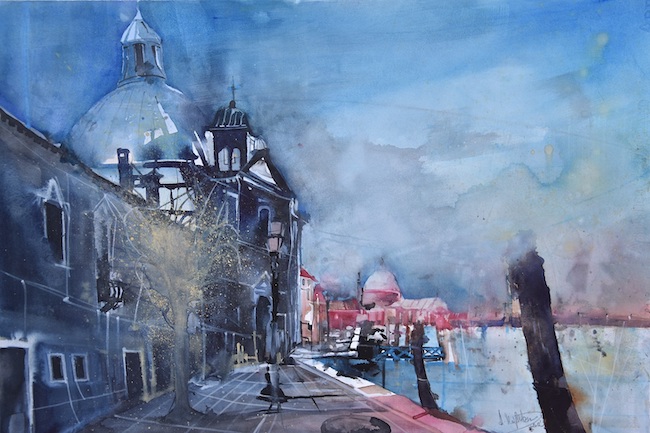 Movement is very often an opportunity for an artist to allow his gaze to be filled with images which, after being elaborated and internalized through the emotional filter, can be impressed on the canvas which becomes a means to narrate the perceived sensations. Discovering everything that the eye is not accustomed to see in everyday life takes on a greater fascination, above all because it allows the creative to deepen his knowledge of himself by relating and interacting with a new setting that inevitably arouses an unprecedented emotional experience. Today’s protagonist makes the visual narration of the visited places, the common thread of his artistic production.

The art of the late nineteenth century, therefore in the period just before, or rather forerunner, of the whole revolution that developed in the first half of the twentieth century upsetting the traditional pictorial canons and determining the detachment from it, was almost divided between Impressionism and Expressionism, very important currents that differed from each other for guidelines and creative intent. The search for light, for the complementarity of colours aimed at giving life on canvas to images as close as possible to objective reality in which the perception received from the gaze had to stand out as if it were resting on a real landscape, was typical of Impressionism, which therefore chosed tones faithful to those of gardens, views and panoramas described; the need to investigate everything that was internal to man and to reinterpret the image by filtering it through the anxieties of emotionality, the deep sensations that the soul perceived by putting on the paintings the deformations of colors and forms fundamental to tell intimate and psychological movements that should not succumb to objectivity, were instead the distinctive features of Expressionism. Herbert Meisslitzer, an Austrian artist trained initially as a self-taught artist, has succeeded, over time and after studying with the greatest masters working in his country, to achieve a wonderful synthesis between the two currents apparently antagonistic but which can also harmonize to tell the reality from a new point of view. After experimenting with various techniques, from pencil handwriting to charcoal and ink, Meisslitzer arrives at colour through watercolour, which is still his preferred means of expression and which he alternates with acrylic and oil; another of his characteristic is that of adding collage to his works, thus giving life to narratives in which the more material images take over and interact with the pictorial base. The expressionist figuration, sometimes even tending to a slight abstraction, modifies the subjects depicted, giving them a decomposed form in which the emotion perceived by the artist at the moment in which the gaze is placed on the panoramas comes out modifying their most real features, giving the observer the feeling of being inside a nostalgic memory of distant places.

At the same time, the colour range chosen by Meisslitzer is the most faithful to the views and nature that he decides to make protagonist, approaching Impressionism for this reason, as well as for the play of light that can not help but instill a familiar feeling precisely because it conforms to the way the eye is accustomed to see what revolves around it.

The artist’s nostalgia for those places he visited is accompanied by the enthusiasm of discovering uncontaminated landscapes and fascinating glimpses of cities and small towns, as in the artwork San Gimignano in which Meisslitzer seems to lead the viewer into the narrow and silent streets of an intact place, still tied to a past that seems not to abandon it despite the contemporary times in which it lives, with still present and felt traditions, as if modernity had not changed its essence; the element of the collage, which seems to want to emphasize the presence of contemporaneity, is linked to the characters who live in those alleys that are sometimes unaware of the charm of those places.

Or again in Rom (Rome) canvas where the material aspect is much more present than others, and where the grandeur of the Colosseum is enhanced by the presence of the subjects, always represented through the collage, who pass by it every day, perhaps without realizing the majesty and beauty of that symbol; that of Herbert Meisslitzer seems to be an exhortation to dwell on everything that surrounds the human being, places that are often observed distractedly by those who live them every day while they are a reason of wonder for those who meet them for the first time.

And the same admired and captivated gaze the artist dedicates to nature, from the olive groves to the mountains of Tyrol and to still life, another important part of the production of this incredible artist, who in works such as Sonnenblumen (Sunflowers) and Hortensien (Hydrangea) is unable to hide his double soul in the balance between the desire to tell reality as it is and the innate tendency to internalize it by infusing it with his intimate and personal sensations capable of escaping from the canvas and striking the inner notes of the observer. Herbert Meisslitzer has had numerous group and solo exhibitions in important institutional buildings in Austria, his works have been included in publications and calendars and he has participated in international watercolour awards both in Italy and India.