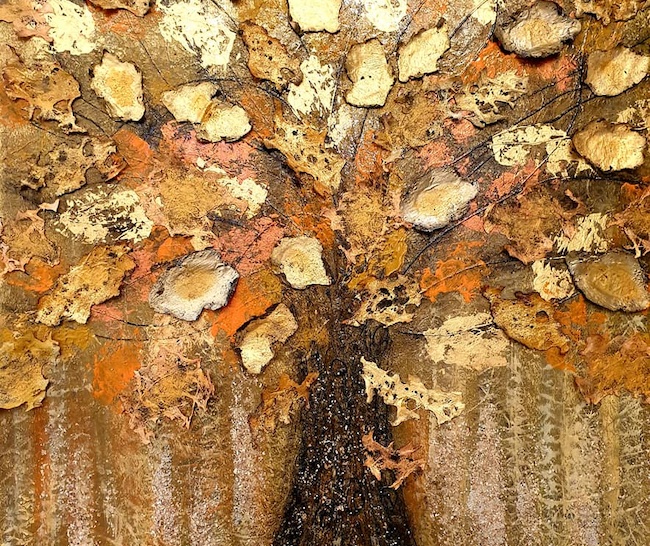 Nature has been the subject of greatest inspiration among artists of all times, even when the taste of the period favoured portraits and images of interiors was never neglected to introduce elements that belonged to the natural world. However, in most cases the aesthetic sense tended to predominate over the more introspective one; in contemporary art, on the other hand, strengthened by the achievements of the past and capable of freely interpreting and personalizing the previous rules, many artists bind themselves to the outside world to lead the observer by the hand towards a deepening of his own feelings. Today’s protagonist is among these artists.

The Naturalism of the mid-nineteenth century had highlighted the attention that the painters of the time reserved to the elements that surrounded the protagonists of their works, while remaining linked to the objective reproduction, as close as possible to the observed reality, without contaminating it with feelings and idealizations belonging to the author. In the following path, from the Macchiaioli to the Impressionists to the London Wildlife Art and finally to the American Hudson River School, it was manteined the tendency to tell the visible without digging into philosophical or social meanings, simply representing an objectivity fulcrum of these movements which, all things considered, were close to Realism but in a certain way different in the choice of the protagonists. Expressionism, instead, overturned the previous pictorial schemes, giving absolute prevalence to emotion, to the sensations perceived by the artists, to the interiorisation of everything that presented itself before the gaze, to transform it into an existential concept, a manifestation of a state of mind that had to be recounted. In contemporary art the boundaries between the various stylistic movements have blurred, or rather transformed into a free and unconditioned approach, perhaps more opened to contamination not only between the various interpretations of the initial approach but also to experimentation with new techniques and creation of new languages. Doina Popescu, a Romanian artist from Bucharest but resident for many years in the cosmopolitan Brussels, is connected to the naturalist need to tell the elements of flora while making it a necessary voice to tell the human feelings that hover around her and that she absorbs by listening to herself but also those who revolve around her, revealing an empathy and an uncommon openness. Trees, her favourite subject, become a treasure chest of emotional memory as well as a story of feelings perceived in a fragment of life that symbolically seems to be the seed in which the roots sink, as if the lifeblood is associated with that feeling that is the means to reach the leaves and flowers to allow them to bloom luxuriantly.

Popescu‘s technique does not stop at pure painting, it is transformed into matter through the use of Japanese washi paper that the artist meticulously paints and then cuts and burns with which she goes to compose the foliage of the trees protagonists, allowing the material element to come out of the canvas to communicate more physically, more consistently, with the observer. The colours chosen are soft, earthy, delicate and nuanced, to underline the need for balance and serenity to which Doina Popescu aspires and hopes for the human being, too often invested with fears, worries, fears that drive him away from his centre, detaching him from everything he really needs to maintain his stability even in difficulties. She loves to immortalize positive, delicate emotions, the artist, those that tell of moments in which the gaze was enchanted not so much by the landscape as by the atmosphere that cloaked what the eyes perceived, so without dwelling on details but letting herself be enveloped and transported by the vibration of inner strings.

This characteristic of Popescu is clearly revealed in the work Fall in Rome, where the colour of the leaves leads back to a season in which nature seems to pause and leave the exuberant vitality of summer, although the still vivid memory places the image within a pleasant, delicate, reassuring rather than nostalgic atmosphere; or again in We are one in which the artist’s exhortation not to forget or neglect the importance of solidarity, help, support to those close to us and in need is highlighted, and this invitation is told in pastel shades, delicate, calming and welcoming in their simplicity, because in fact we all belong to the same root even if with different colors, seems to whisper Popescu.

Even when moving towards the Abstract, as in the work Shadows of time, she does not omit that sense of positivity that attracts the observer within a placid, serene dimension, without apprehension because it is precisely in the shadows of the past that the growth and formation of the people one has become hides and therefore to accept what has been is better taking the positive teaching and leaving behind what cannot be changed.

Rejecting understanding and awareness, the risk is to live behind masks from which it is difficult to get out, hiding those Unfathomable Thoughts that if on one side defend and protect our identity, on the other side make us unable to be freely what we really are.

Doina Popescu‘s tendency to Materico is mixed with the need to communicate also through the poetry with which she accompanies each of her artworks, explaining the message that lies within each of her fascinating canvases. To her credit she has twenty-five solo and group exhibitions in Italy, Belgium, the United Kingdom, Romania, Switzerland and the United States, she has won numerous international prizes and one of her works is in the permanent collection of the European Art Museum of Denmark. Soon she will co-protagonist of a tri-personal exhibition entitled Mother Art at the Artimundo Gallery in Brussels.