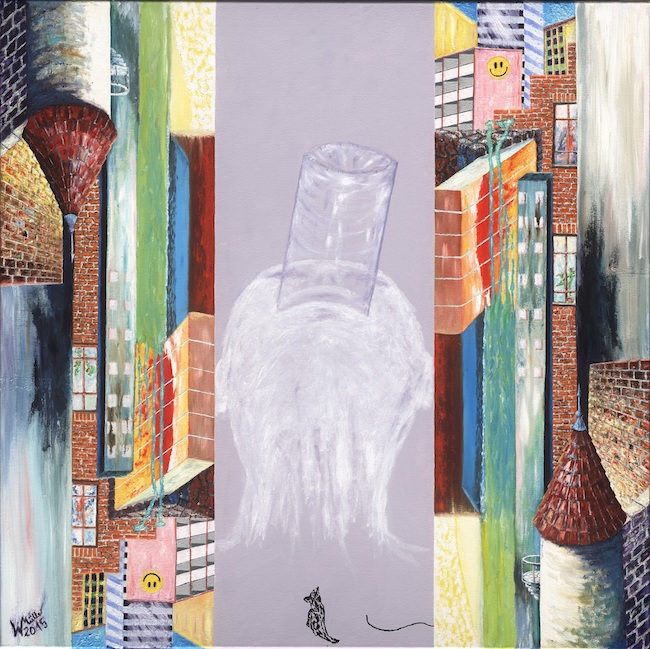 Exploration of a different reality, which goes beyond what appears on the surface, has always been a cornerstone of Surrealism, fundamental movement of the first half of the twentieth century, of which today’s protagonis artist is a perfect exponent. Let’s find out why.

Surrealism, whether Metaphysical like the one of Magritte and De Chirico, or visionary like that of Dalì or childlike like that of Mirò, has the singular characteristic of examining parallel worlds, liquid or defragmented realities which are observed from a new point of view, the tendency to tell the invisible inside what the eye is used to see. The result is works that force, or rather induce, the viewer to pause his gaze, to investigate every single element of the painting to meditate on them, to draw the hidden meanings that very often open the door to the infinite options that in objective reality are not revealed. The dimension of dreams, of vision, of the alteration of the relationship between space and time, infuse the paintings with that unreal yet incredibly strong atmosphere, intense in its meanings. Wolfgang Müller, an artist formed by self-taught but able to establish himself in international art world by building a career of great importance, is a perfect representative of a Surrealism that fascinates, overwhelms but at the same time asks and inspires a deep analysis of every element inside his artworks.

His world is that of possibilities, of truths which could be those but also others, of concepts that are modified in their original meaning to model themselves on the basis of the feeling of the artist, to adapt to his point of view, which, in turn, does not impose itself but simply suggests, creates a stimulus to seek a truth relative, unique, unusual and uncommon, in those who observe his paintings.

In the work Endlichkeit (Limits), the artist places the protagonists of original sin at the centre of the scene in the moment when Eva is about to go beyond an imposed limit, to perform the only act that will make them fall by breaking the net that keeps them high in Eden and that, once broken, marks the boundary between before and after, between the protection from evils constituted by a cocoon of liquid placenta, and the imperfect world, and in perpetual evolution, which will begin from that moment.

In Symbiose (Symbiosis) Müller focuses on instinct, on a union between man and woman represented as headless aliens, precisely to underline how little rationality is relevant in emotional and sentimental relationships, and how much the symbiotic union is instead linked to the soul, to the interiority ungovernable by the mind because born at a different level, higher, inexplicable as well as irrational; but also sensual, carnal, because the soul needs to wear the dress of the union of bodies to generate a complete fusion.

In Selektion (Selezione) Wolfgang Müller takes up again the theme of original sin but declines it according to a different meaning, distorting the temporal axis to tell a selection that was initially natural, that of the primordial choice to fall from the earthly Paradise, but then over the centuries has taken on different meanings until transforming in an adaptation of the fruits of earth to the needs of contemporary man, with rhythms and cadences different from the natural ones and so precise and mathematical to be entrusted to the management by an automaton.

And again, Mann und Frau (Man and Woman), are narrated by Müller as if they belonged to two separate yet parallel worlds, distant but next to each other, mutually misunderstood and incomprehensible and yet united by a magnetic force, by a serendipity that often generates encounters, clashes, which inevitably and indissolubly put the two parts in deep contact. The most evident symbol of his visionary approach to reality, where everything really appears in different ways depending on how you observe it – and in this he takes up the themes of the upside down dear to Escher – is the work Stillstand (Immobility), the image on article cover, in which the world around the central figure, frozen in the simbolically act of drinking life, can be seen bilaterally from below or from above because each element that composes it has a double orientation, an optical illusion that makes everything unreal, as is that tangle of houses and roofs without any life being told inside. Immobility is that of contemporary man who takes refuge in certainties that are not as solid as he thinks they are, who is locked up in an excessive individualism that leads him to incommunicability, to digital isolation and to a solitude in which the walls in his house, seen as a refuge but which in reality constitutes a cage. So Wolfgang Müller is a visionary, an excellent exponent of contemporary Surrealism precisely because of his meditative approach, reasoned and constructed of a world that appears in perpetual and possible transformation, which could be but is not, which could not be and instead is, in the canvases of the German artist. During his career he has participated in many collective exhibitions throughout Europe (Venice, Milan, Hamburg, just to name a few) and has received significant and important awards and recognitions

The mysterious worlds of Gheorghita Ouatu, exploring the hardships of contemporary man (IE)