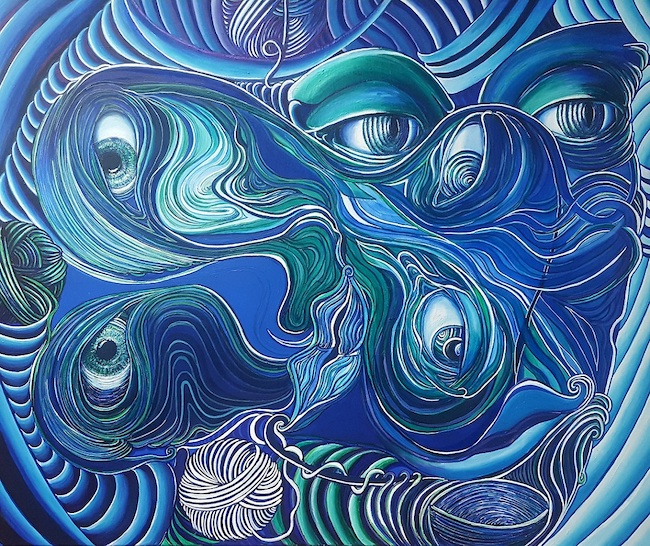 Contemporary existence is a complex and multi-faceted universe that the artists of the twentyfirst century explore in every nuance, each one through a personal language that is often a synthesis and fusion of movements that in the previous era had remained strictly separate and distinct from each other. Today’s protagonist draws on two important currents of the past to generate an approach that tends to go beyond the visible, to investigate the sensations which that silent movement that remains unexpressed and unheard, unconsciously arouses in modern man.

In the early years of the twentieth century was emerging in Germany a pictorial that wanted to oppose objectivism, the aesthetic representation of reality that had distinguished Impressionism, precisely because the historical panorama was moving towards a scenario very different from the enjoyable and aesthetically pleasing one of the noble and bourgeois life so exalted by the highest representatives of that late nineteenth century current, four among them Renoir, Monet, Manet, Degas. In the new European context the war was advancing with all the fears, dreads, anxieties and insecurities that surrounded society and that could not go unheard by those who had to witness that society, namely the artist. The Expressionist movement set itself the objective of affirming the predominance of the individual with his emotions, sensations, and interiority over an objectivity that could no longer be distinguished and detached from what was continually perceived and felt in the complicated daily life. The creative impetus of artists such as Van Gogh but also the astonishment, panic, despair, and inner nightmares present in the works of Edvard Munch, Egon Schiele, and Oskar Kokoschka, had the ability to represent that long twenty years in which the importance of the human being was set against the alienation of progress in which the sense of the individual was often lost, in which the exploration of the mind and psyche, through Sigmun Freud‘s studies, was generating an awakening of the whole cultural and artistic world that no longer recognized itself in an aesthetic that renounced the deepest sensations and emotions. In the same way, the contemporary movement of Surrealism, in turn, was linked to the unconscious, to anguish and to the world of dreams, giving rise to works that were more far from reality because they were filtered by the psyche, anxieties and existential nightmares of the artist as well as of the human being who, in an age of destruction and loss of external certainties, could only cling to himself. Alexandra Mohr, a German artist who cannot but draw on that Expressionism that saw the birth of her own nation, introduces in her works also elements typical of Surrealism to narrate and testify a personal point of view on the disorientation and precariousness of contemporary man, distant in many ways from the anxieties of the twentieth century but no less intense and destabilizing for a daily life that is facing continuous changes and global challenges.

The watchword of Mohr’s canvases seems to be precisely the transformation, the metamorphosis and the need of the modern individual to mould and camouflage himself with a chameleon-like attitude, depending on the people he comes into contact with, or the events he experiences, or the many dissonant voices he listens to during the day. So the artist’s gaze becomes a means of investigating the thoughts and truths hidden in others but also in the reality that envelops current life, an exhortation to the observer to listen more carefully to what revolves around him to discover the enigmas and to deepen their implications that otherwise would not be noticed.

In the work Past, present, future 2 Alexandra Mohr tries to dig into a complex, multi-faceted interiority, which changes in virtue of events that have happened and those that are about to happen, but which all too often forgets to stop and come to terms with that complexity because it is difficult to accept, sometimes painful precisely because of events that, while transforming the protagonist, have been placed in a drawer of memory where it is better to keep them. But anyway, on deeper examination, they still emerge from an expression, from a wrinkle on the face, from an apparently forgotten detail.

In the canvas Gegenwart (Present) the curved lines that wrap the face in the foreground seem to represent the stratification of existence, that accumulation of experiences, episodes, events that have the ability to slowly but inevitably transform the essence of each one, even when one would like to remain strongly tied to convictions and fixed points that are impossible to resist. So we have to surrender to live with all the baggage that we carry with us and that, after all, makes us the people we have become.

When, however, the narrated individual feels the need to free himself or, on the contrary, to protect himself, Alexandra Mohr moves away from her more figurative side and approaches the indefinite Abstract Expressionism, which never completely hides the body that he has to protect, veiling it without disintegrating it, because it is precisely within the confusion that lies a new certainty to the possibility of rebirth.

The works Amazone, Energie and Cocoon are emblematic of this philosophical concept of the artist who looks at man and the individual as the central essence of a world that instead seems to want to forget him; in those courses and recourses that history always proposes, Alexandra Mohr finds the same need to put emotions and anxieties of current life within a pictorial research from which can only emerge the human with all its weaknesses, with its fears, with its temporariness. Alexandra Mohr has a very long artistic career, she painted her first canvases in 2003, but only in 2018 she decided to show her creations to the public by participating in important international exhibitions and fairs – Switzerland, Spain, USA, as well as Germany of course -; she works on commission both abstract and figurative.