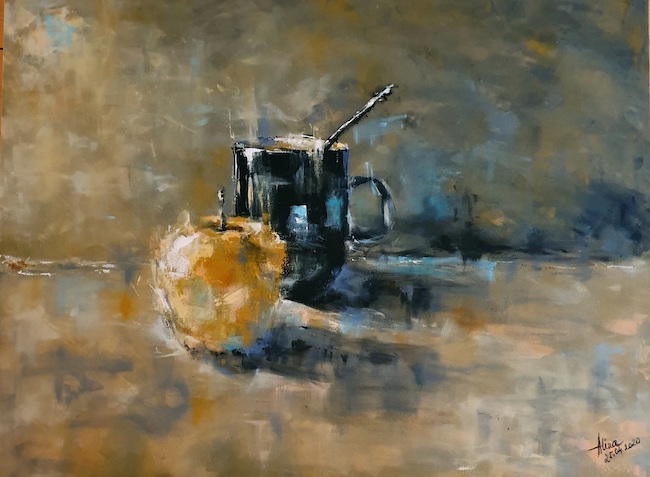 Some painting styles appear to be functional in making the narrative soft, enveloping, precisely because of the use of colour, of the approach to the canvas that is perfectly in tune with the intent of the executor, manifesting the gaze through which he observes the life that surrounds him; yet some of these artistic methods seem to be relegated to a past or to subjects from that past that cannot find a new topicality. The artist I am going to talk about today redefines the boundaries of an important pictorial movement of the past by tuning it to contemporary sensations and images.

When, at the end of the 19th century, a break with the previous rules of painting began to emerge, especially with the choice of subjects which had no longer to be tied to religious themes or portraits of noblemen, a considerable number of artists chosed to take up the themes and pictorial intentions of the protagonists of Romanticism, particularly the English one, but introducing a different study over the use of colour to give a greater rendering to the final image. Impressionism, the name of that revolutionary movement from which all the subsequent currents developed for whose the decomposition of observed reality was an essential imperative, decided to prioritise, like the Romantic painters, a return to nature, making the landscape the preferred subject, as well as the reproduction of idyllic landscapes or moments of leisure and joie de vivre that characterised the bourgeois society of the time. But the main innovation of the protagonists of the movement was the use of colour, which was no longer spread and mixed but laid on the canvas through short brushstrokes in which the various tones were simply juxtaposed, giving the observer a feeling of greater dynamism of the image, of movement, of a greater rendering of reality. This and the decision to reproduce scenes of everyday life, of moments of fun and relaxation experienced in conviviality determined the worldwide success of artists such as Claude Monet, whose rarefied landscapes vibrate with light and emotion, the charm of the ballet and backstage at theatres that characterise the paintings of Edgar Degas and the glimpses of life in society, of occasions of celebration and meeting by Pierre-Auguste Renoir have conquered fans and admirers all over the world. In the common imagination, however, Impressionism remains inextricably linked to the late 19th century era in which the movement was born, not least because not many contemporary artists chose this style to distinguish their work, but those who do adopt it manage to give it a personal and innovative touch that makes them recognised universally. Jeremy Mann‘s Urban Impressionism is able to fascinate a large audience precisely because of his ability to narrate silence, the nocturnal streets of the metropolis and the sensation for man of losing himself among the buildings, streets and skyscrapers. Similarly, Leonid Afremov‘s unreal but enveloping colours describe atmospheres suspended between a nostalgic recent past and the artist’s positive and sunny outlook in describing them. The Romanian naturalized Italian Alina Ciuciu approaches the Impressionist style in a natural way, as if her inclination had pushed her towards that approach of decomposition, of subdivision of colour, which in her materializes with the use of the spatula, functional to the emotional gaze that she turns to the observed world, to the small and simple moments of everyday life that for her assume importance precisely because they belong to a multi-faceted emotional world that is reassuring and enveloping.

Thus the atmosphere that emerges from her canvases is warm, soft, her still lifes tell of familiar objects that become protagonists by virtue of her sensitivity, of that attention to details that are often overlooked but which in reality constitute a puzzle of certainties that make up everyone’s life.

What becomes predominant in Alina Ciuciu‘s artworks is the sensation, that enveloping approach that restores, or rather gives prominence to all that which without her emotional lens would simply be negligible, part of a reality to be overlooked because it is habitual; and it is precisely by virtue of this lens that the object is placed in the foreground, and its preponderance over the surrounding space makes it the first actor in a scene in which the observer’s feelings are amplified, emphasised because of the artist’s ability to narrate what the eye is used to see every day without dwelling on it.

The use of the palette knife gives an evocative aspect to the simplicity of an daily event, or to the romantic image of a a woman walking towards a place far from the centre of the artwork, of a glass, of an instant of pure happiness, all moments or situations in which people often lose themselves almost unconsciously, or objects that are used almost carelessly, distractedly, but without which life would be different.

A glass of wine, a slice of cake, a bag of groceries belong to everyone’s routine, yet it is only through the artist’s ability to observe them from a different point of view, one that transforms the ordinary into the extraordinary, that they manage to have a new meaning, to occupy a prominent place that inevitably envelops the observer.

Alina Ciuciu‘s approach to the canvas is poetic, as if in her artworks the beauty of the present were superimposed on a sweet nostalgia for the past, for the history that the objects bring with them, for what they have represented in the individual’s existence and for what is reassuring and soothing; just as empathetic and involving, even if discreet and caressing, is the gaze that she turns to the women who are the protagonists of some of her artworks, at times lost in the grandeur of their surroundings, as in the painting Scalza nel parco (Barefoot in the Park) in which the damp rainy atmosphere seems to accompany and lead the girl towards a point far from the centre of the canvas while she abandons herself to that juncture, resigned but confident in feeling welcomed by the nature around her. At other times, however, they are the absolute interpreters of a range of emotions that Ciuciu describes in the present but which are only a treasure chest of everything that has taken place in the past, which their looks and gestures seem to enclose and whisper before letting out the emotion perceived at the moment the artist chooses to portray them.

Alina Ciuciu, highly appreciated by art lovers and collectors from all over the world, has exhibited in numerous group shows in Italy and abroad – Berlin, Monte Carlo, Oradea (Transylvania), Paris, Budapest, London, Copenhagen – winning prizes and awards for the originality and atmosphere of her paintings.