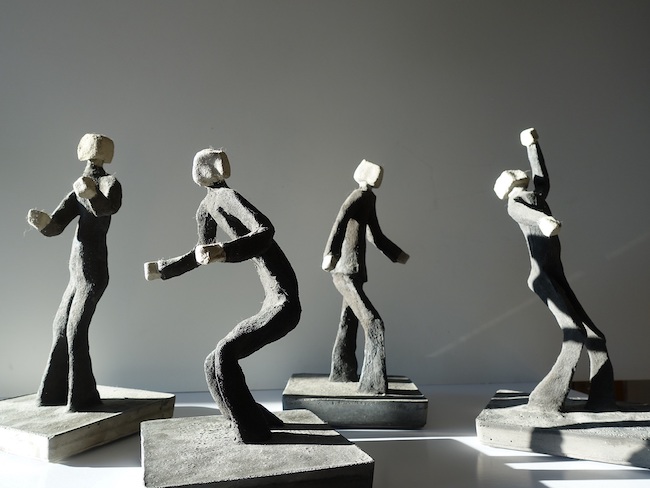 A smiling and sometimes irreverent approach to the events of life is common to many contemporary artists who express their creativity in different ways and styles, demonstrating the need to find the smiling side in a modern life that often tends to engulf the individual and flatten the natural vivacity in the folds of routine. This characteristic sunny and amused approach distinguishes the artist I am going to talk about today.

The profound changes that took place in the artistic field during the first part of the twentieth century could not fail to involve sculpture, perhaps the most bound to the classical canons from which it seemed impossible to detach; the revolution in the conception of observed reality aimed at subverting every previous scheme freed the figurative arts from adherence to what the eye could see in front of it, introducing the universe of non-form, of the supremacy of essence and concept to the detriment of an aesthetic perfection that seemed to have become anachronistic. The study of Primitivism carried out by many of the great artists of the time, including the famous Pablo Picasso, led sculpture in a different direction, less realistic, more ideal and aimed at emphasising substance rather than form, at studying the image from an unprecedented, disjointed, stylised point of view, rather than adhering to the pre-existing canons of classical beauty. As painting discovered and allowed itself to be fascinated by non-figuration, making Abstractionism one of the predominant voices of the first half of the 20th century, sculpture moved along the same conceptual line through the artistic production of three of the century’s greatest representatives: Constantin Bràncusi, Henry Moore and Alberto Giacometti. Different both in their expressive intentions and in their unique and inimitable style, these three giants of modern sculpture have left a mark but also a message, a testimony of a particular era, frenetic in its progress as well as in the loss of values and certainties caused by world conflicts, by the disorientation of the individual, by the evolution of technology which often alienates the individual. While Bràncusi, with his minimalist and stylised forms, intended to go beyond appearance to enter the world of essence, of what remains when reality takes off its formal clothes and strips itself of the superfluous, appearing as clean and polished as the surfaces of his artworks, Henry Moore, on the other hand, emphasised the need to narrate, to testify to the importance of emotional ties, of the intimate and intense phases of life, such as motherhood, family relationships, of an inner greatness, which was also reflected in the dimensions of the sculptures, aimed at underlining how man is constantly and necessarily connected with his emotional world; and finally Alberto Giacometti, who with his thin and slender figures wanted to express and narrate the discomfort of the human being, the fragility of an existential condition in which the individual is not the protagonist but the victim of larger events, of happenings that he is forced to endure and, in the presence of these, to understand how to survive them.

The Polish-born but naturalised German artist Aleksandra Schmidt approaches sculpture in a different way, more light-hearted, more open to that subtle irony that is fundamental to take life lightly, with that ability to smile at the small defects and little dramas that characterise existence and from which one can escape, finding the right key to interpretate them.

Artist by nature, Schmidt began to express her creativity through drawing and painting, then experimented with other techniques, both pictorial and sculptural, until she arrived at her current style in which she reveals her aptitude for irony as well as her need to measure herself against a ductile material, as perhaps the individual should be in the face of life’s events, but in a second phase decidedly resistant and tough, namely cement.

Aleksandra Schmidt plays with the concepts and weaknesses of contemporary man, with that alternation between emptiness and fullness, between consistency and attention to the ephemeral that is now part of today’s society, often at the expense of a profound contact with oneself in the conviction that the empty part is the most important to maintain in front of the world in order to conform to a system.

In the artwork 6×6 she mocks the tendency of many people to rely on fate, on destiny, on that Russian roulette of chance without intervening directly, as if the real protagonist, the man, were just a simple pawn at the mercy of events, of that roll of the dice that determines everything that happens; the sense of fatality is emphasised by the dice in unstable equilibrium between the base of the sculpture and its centre, to emphasise how, without the direct action and will of the individual, everything can be left to pure chance.

In the sculpture Maskenkult (Cult of the Mask) the artist explores the theme of having to hide oneself, to conceal one’s essence in order to be what society and the environment around us demand, and thus the desire to please a system from which it seems impossible to escape becomes a priority before the need to manifest one’s true nature, so much so as to forget it beyond that mask which has now become bigger than the individual himself.

In Tänzer (Dancers) the two protagonists support each other, almost as if they wanted to walk together along the bumpy road that is life, almost as if they needed a guide, a sure shoulder to dance on the world, on an existence that in solitude is frightening; the dance thus becomes a symbol of living, a metaphor for the instability of an existence that disorients and induces the protagonists to bend backwards, as if struck by the wind of circumstances but resisting them.

In other works, however, such as the sculpture Blau und Grau (Blue and grey), Aleksandra Schmidt reveals her love for non-form, her desire to approach the plastic gesture as pure as it is, representing two entities with holes in the centre, holes which may symbolize both emotional emptiness and the ability to mould and adapt to external reality; in this artwork too, the ironic gaze through which the artist observes and represents sensations received from outside is evident, precisely because of the interpretative doubt she gives rise to in the observer standing in front of the sculpture. The material used, cement, is never coloured when the sculpture is finished, but pigmented before it is moulded, and this is one of the most interesting stimuli for the artist, who loves to experiment, improvise, connect with the material to create stable works that can also be exhibited outdoors without risking damage. Throughout her career, Aleksandra Schmidt has participated in and organised many group and solo outdoor exhibitions and is a member of the Olching Artists’ Association.