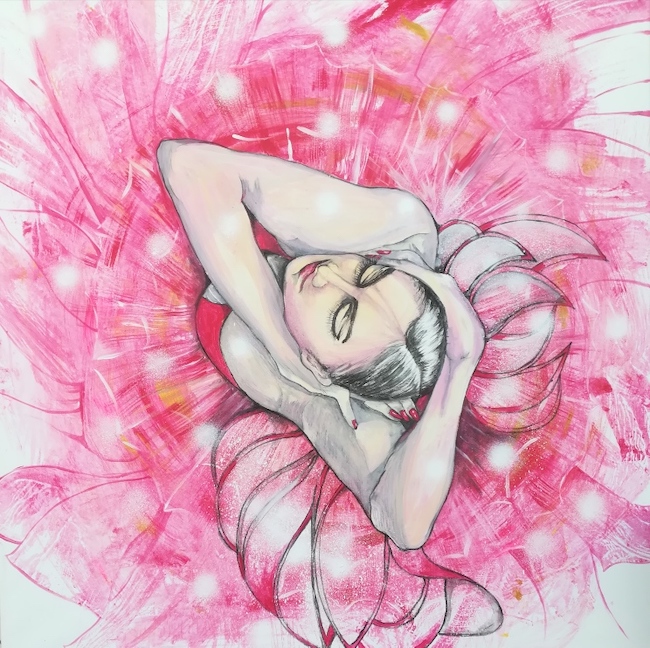 In the evolutionary path of each artist there are phases of experimentation and, very often, of clear personalization if compared to the style to which they choose to belong, modified for intention, for expressive concept and for executive mode to the point of giving life to a completely different style, unpublished, unique precisely because shaped by the individual creative impulse. Today’s protagonist draws on the past to free her own personal point of view.

Zvezdana Remic Kreling, born in Croatia but living in Vienna for many years, is artistically inspired and draws cue by those artistic currents that dominated in the early twentieth century and that have literally invested the whole Europe, although with different characteristics from area to area. At the end of the first decade of the past century was born the movement of Expressionism, whose main mission was to put in the foreground the emotion, the instinctive, the strong one, not filtered by reason and the balance of a Realism devoted almost exclusively to aesthetic research. Torment, inner conflicts, unconfessed fears and the need to find a meaning to a life that was heading towards the anxieties and uncertainties of the Great War, were the basis of works of great emotional impact and able to communicate feelings directly to the observer. Unlike Northern European and German one, Austrian Expressionism was distinguished by a less gloomy pictorial approach, a decidedly brighter or faint range of colours, as if somehow there was always a latent and unconfessed feeling of hope. Sensual works and at the same time closed in the intimacy of a psychological path to explore of Egon Schiele, where the contours seemed to be a necessary means to define his need to narrate the upsets and restlessness of his subjects, but also Oskar Kokoschka‘s shaded and more sensibly visionary atmospheres, were deeply oriented to the inner analysis of the characters in which, however, the link with a salvation was still possible, the restlessness could have an opening towards the positive, precisely because of the great humanity that both were able to impress on the canvas, despite the obvious discomfort of the characters portrayed. Zvezdana Remic Kreling draws on the second master of Austrian Expressionism for her choice to tell a world, an inner universe halfway between the real and the visionary, although choosing softer, more nuanced colours. Perhaps because those narrated are positive sensations, linked to that range of emotions that are merged to contemporary life and that have the power to exalt it, despite the contingency and despite the difficulties that anyone, sooner or later, has to face. In a concept so open to the positivity of the moments of existence, Kreling cannot neglect sensuality, portraying women hovering between making the most provocative side prevail and the need not to forget the most fragile part, that of the feeling that is often forgotten precisely because of a physical bond.

And it is precisely at the moment when this dualism, this balance between the various facets of a personality, too iridescent and mutable to be defined, clearly emerges, that the artist introduces some hinted cubist elements, those closest to the decomposition of Georges Braque‘s reality, through which she underlines the fragmentation of each individual, that kaleidoscopic tendency to make different yet necessary elements coexist to define and try to understand the singularity, the sometimes contrasting alternation of emotions.

In Lola artwork this binomial, this need for balance between the sense that allows the protagonist to feel at ease, and the strong determination, emerging from the proud gaze, to hide an interiority that must be protected in order not to feel discovered, not to give in to a sentimentality that too often has hurt.

Just as in Love, a canvas dedicated to the purity of the most involving emotion, the protagonist is told through a fragmentation, that network that perhaps constitutes the past, an emotional elaps of scars and suffering that has determined the possibility of waiting and recognizing the person inside whose embrace melting. In this work, almost completely in grayscale, apart from that violet that binds to the soul, the tones are very nuanced, probably to highlight the lightness of a sensation capable of lifting from the ground with its intensity. But then when she describes the woman, the delicate feminine world, she returns to the visionary Expressionism Zvezdana Remic Kreling, that world suspended between external reality that seems to determine the events and the awareness that every step, every choice, every path as well as each outcome actually depend on the single ability to face everything that happens, react, protect oneself but without ever letting oneself be carried away by the current, without allowing something external to decide a path that can only be the result of self-determination.

Luck and Freedom are the artworks in which this quantum concept is strongly evident, just as it is clear the freedom that Kreling leaves to her characters to decide whether to emerge from the water or stay under it, whether to free themselves and run towards freedom or stay still waiting for someone else to give it as a gift.

Zvezdana Remic Kreling‘s artistic production is an investigation into the female world, within hers doubts, hers many facets, hers interrelationships with the male universe, hers being safe and fragile at the same time, hers being contemporary but basically linked to the atmosphere of a past in which she would like to know how to get lost without neglecting the present moment. Zvezdana Remic Kreling has participated in numerous solo and group exhibitions in Austria and Croatia and has executed many works commissioned by private collectors from all over the world.