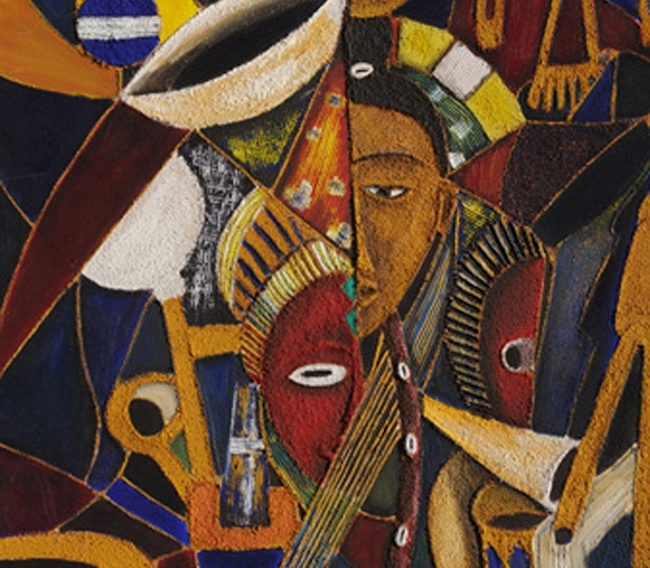 In the multitude of contemporary artists, many of whom tend to rush towards innovation, to anticipate trends and find new languages to represent emotions and sensations, there are some who remain so tied to their own traditions, to distant origins from which, for various vicissitudes or motivations, they have been forced to move away, to become the focus of their artistic production. Today’s protagonist manifests that strong bond, that desire to pay homage and witness to his world, distant yet indelible in his memory.

African Art was an incredible source of inspiration and study by great European artists of the late nineteenth and early twentieth century, for the simplicity of the representation of faces and characters taken from common life, but also for the symbols of their animist religion and the fascinating meaning that the colors took on. The first to let themselves be conquered by this type of art and by the energy of red, symbol of fertility, white, eternal life, and black, darkness and occult forces, were the Fauves, a group in which strong and intense tones were substantial to highlight and give meaning to the guidelines of that current that tended to simplify forms, to annul perspective but above all to give space to the use of bright colors, sometimes even aggressive, because they were functional to tell pure emotions. For a short period of time a young Pablo Picasso approached Fauves and was strongly impressed by the masks and the African world to the point of elaborating, starting from the faces and the simplicity of the traits and shapes represented, a new artistic movement that will remain forever linked to him: Cubism. Picasso‘s need to detach himself from the rigid rules of the classical perspective, the search for an approach that would give a new three-dimensionality to images by observing them from a plurilateral point of view while putting every element in front of the observer’s gaze, found important cues in the African masks and icons that were so fascinating to him. The objective description of the reality chased by Cubism, without leaving anything to the emotions that could not enter into such an analytical observation of what was observed and that had to be described according to those guidelines, was however far from spiritualism and the bond with the most primordial sense instead absolutely present in African Art, the one inextricably linked to traditions and religiosity that was, in turn, strongly linked and dominant in the daily life of the people. Laurent Tia, originally from the Ivory Coast but living in France for some time, chose Cubism as his expressive style even though he felt the need to detach himself from some of the guidelines of this current precisely because of the need to imprint in his works the purest emotion, that sense of nostalgia, memory and spirituality that he feels is inextricably merged to his land, his people and traditions that, through his paintings, he wants to make known and survive in time.

Not only that, Tia chooses to approach the third dimension, rejected by the movement to which he has chosen to belong, through the use of bas-relief, a typically classical technique yet incredibly updated by the artist, which makes his works unique and definitely engaging for the viewer.

He uses natural pigments on wood to represent the religious masks, the ones that indicate to people the right way to live, to behave, the opposition between good and evil, the impending punishment if the rules are not observed; to this series belong the bas-reliefs Masque et philosophie primaire and Masques et initiation, in which the masks are fundamental to indicate to which moment of the everyday life of the local people are bound.

But Laurent Tia, born and raised as a French citizen in Africa, cannot fail to point out to those who observe his works the path of integration, the one by virtue of which two apparently opposite cultures can find a meeting point, maintaining their distinct identity but without the need to fight or generate opportunities for friction.

Emblematic of this concept is the artwork L’union des cultures, in which the symbol of art of all times, Leonardo da Vinci’s Mona Lisa exhibited at the Louvre Museum, is merged with an African woman, as if their figures were two parts of the same identity, of the same belonging, that of the human race which in art can be raised and can break down all barriers.

Le marché Dogon (Dogon market), on the other hand, while describing a scene of daily life that crosses Tia’s memory, whose subtle nostalgia is perceived in every work, that Africanache that assails and induces him to tell his country in all its aspects, seems to be a tribute to Pablo Picasso’s Demoiselles d’Avignon. In this case too, Laurent Tia tends to emphasize how much the color of the skin is unable to mark a profound difference in the way of life and habits that, all things considered, are also found in that Western world that is sometimes considered so far away.

And it is precisely nostalgia that is the absolute protagonist of one of Tia’s purely pictorial works entitled Nostalgie culturelle (Cultural nostalgia), in which emerges that strong atavistic and indelible bond with all that his eyes have seen and experienced and that his soul jealously preserves within itself; here the atmosphere approaches Surrealism for that placing within a path of memory in which the bubbles, reminiscent of soap bubbles, preserve fragments of images that make up the magic box of memory. In the course of his thirty-year career Laurent Tia has exhibited in France, Switzerland, Austria and Italy and has won two important art prizes, Bas-relief Sculure Promise Prize assigned by Le calendrier agricole of Abidjan in the Ivory Coast, and the Raymond Van Leden Prize with the sculpture Le voyage de Crist and the pictorial work Trésor; he is a member of the Maison des Artistes and a member of ADAGP, Societé des auteurs dans les arts graphiques et plastiques in Paris.