Home Lifestyle Achao, spirituality is linked to innovation to express the lightness of being...
Facebook
WhatsApp
Twitter
Linkedin
Email 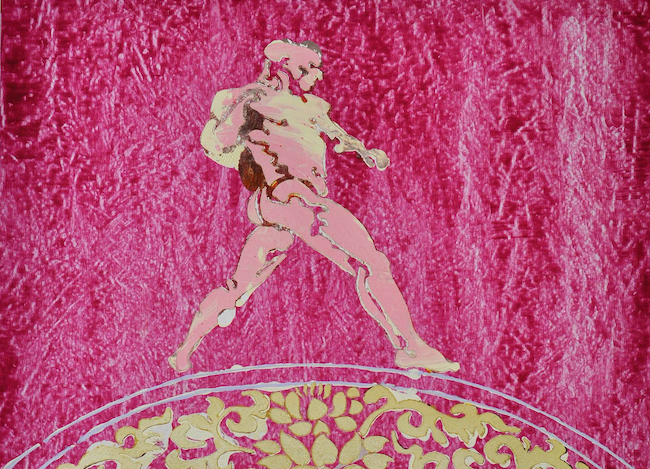 The research of many contemporary artists has been oriented towards highly emotional paths, aimed at the knowledge of an interiority that would hardly be able to manifest itself through different languages. Often this path has had as a consequence the detachment from a classical aesthetic that seemed to enclose the substance within a perfect form, a symbol of universal beauty which, however, was not enough to tell the deepest feeling. Today’s protagonist has achieved this detachment while maintaining a strong bond, has transformed it while remaining bound to it.

It was precisely the in-depth study of sculptural techniques at the Adac Academy in Paris that brought out in Achao the interest in the representation of the male body form and to desire, in a second phase, to tackle a pictorial research in which he could express his profound tendency towards spirituality that becomes a guide to lighten the body structure and strip it of all canons of Classicism. His annual travels to India have placed him in contact with a revealed self, listening to everything that is soul rather than to the body that encloses it, inducing him to look at reality with different eyes; this long journey has modified his creative manifestation by linking him to an absolutely unique pictorial world, where the parameters of Classical sculpture, plastic poses, iconic gestures, the description of natural elements, are revisited from a less aesthetic point of view and decidedly more oriented to the pursuit of a sense, that of the essence of life itself.

A source of inspiration in the study of the male body, but also of everything that is vital and visible, was for Achao the technique of Eadweard Muybridge, the English pioneer of photography in motion whose study of the movements of athletes and animals influenced and fascinated many artists of the twentieth century including Francis Bacon and also a big part of the Kinetic Art of the sixties. Achao takes up the idea of movement, however, placing it on an almost dreamlike level, unreal in the choice of colours precisely because the important message he wants to get out of it is that of lightness, of the importance of a connection of the soul with everything that revolves around it, in which the priority is feeling rather than showing itself.

So the chromatic range draws on Expressionism precisely because of the prevalence of the inner world, where every subject reproduced, from the human body to nature, from the movement of the sea to the beauty of flowers, is not told from a real base but from a dreamy point of view, tending towards an ideal dimension that can only be reached by stripping oneself of contingency, of exteriority, to face a long journey through the ego, the only one that makes the individual aware of his or his centre, of his equilibrium, of his authentic being, thus allowing him to detect all that is beyond what the gaze sees.

From the point of view of technique Achao shows a strong tendency towards innovation, perhaps mixing the dualism within himself which he cannot contain and which needs to manifest itself in a pictorial world poised between perceiving emotions and experiencing the necessary representation as a means of visual communication, using in his works not only acrylic colours but also stencils to give defined form to the main images around which the rest of the composition rotates.

Usually used more frequently in Street Art where the creative act must be quick and immediate, especially when, as in Banksy‘s case, one must necessarily avoid being discovered both because of the provocative message of urban works and because one wants to keep one’s identity hidden, the stencil is also finding application in works on canvas and becomes itself a moment of the creative act. Artists draw and execute the stencils as if they were part of the canvas, on which they are then applied to generate the final image. The result is a new pictorial message that takes nothing away from the expressiveness of the painting, on the contrary, it amplifies its visual potential in the name of a synergy and contamination that are now the imperative for all contemporary art of the twenty-first century.

The series of works Dancing with the sea, belonging to Achao‘s most recent production, are particularly representative of its tendency towards a search for lightness and delicacy that is expressed not only through light and luminous tones but also thanks to the idea of fluctuation, of a slow flow of the waters sometimes described with colours similar to reality, some others instead, based on emotions and sensations experienced by the artist in the moment in which he found himself in front of it, with unreal tones capable of transporting the viewer into a personal feeling and yet capable of amplifying itself towards the outside of the work. The choice not to affix frames to his works, defines and underlines Achao‘s tendency towards perpetual evolution, towards the freedom of feeling, a yearning for an infinity that corresponds, all considered, to the pantha rei, to the whole is transformed theorized by Heraclitus. Achao has had many group exhibitions, especially in France and Belgium, and many solo shows; in March 2020, from 20 to 26, his first solo show will take place in Italy at the Arte Sempione gallery in Rome.