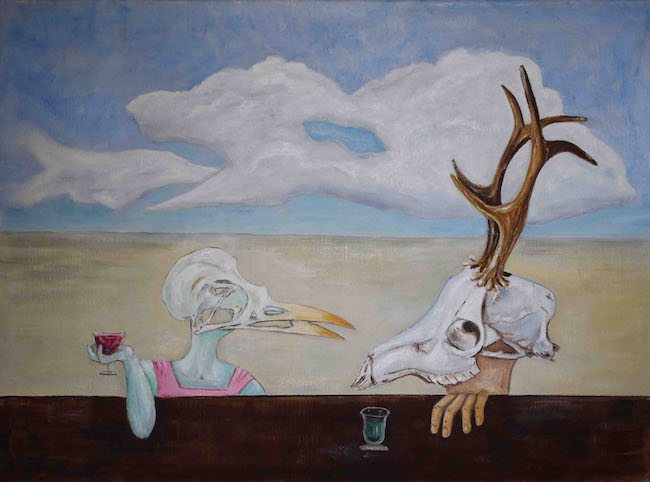 The elements of the unknown, the non tangible or verifiable, have always fascinated human beings as well as the large number of artists who make vision, the imaginary world and futuristic scenarios the basis of their pictorial production. Today’s protagonist has the characteristic of exploring existential concepts and giving her own personal interpretation of what awaits the individual after the passage into the world, based on his actions and on how he chooses to live it.

Surrealism was one of the most revolutionary artistic movements of the early decades of the twentieth century because it introduced for the first time in painting and sculpture the theme of the unconscious and the dream that had to be expressed freely on canvas to narrate fears, anxieties and feelings normally obscured by the rational mind. In the birth of this pictorial movement, fundamental was Sigmund Freud‘s study of the psyche, that revealed how much the irrational part of a person weighed on his behavior and attitude towards life. On the basis of this individual and personal approach, the fathers of Surrealism, Salvador Dalì and Max Ernst, sketched a disturbing universe, more linked to nightmares than to dreams, deforming reality in relation to the perception of the unconscious mind and decontextualizing objects and scenarios in order to indulge them in their visionary journey. Alongside the two masters, a different creative intention emerged, more meditated, more aimed at explaining or letting the concept hidden beyond the things and people narrated, therefore with a more inquisitive and reflective gaze, typical of the contemporary Metaphysical movement, which distinguished the extraordinary artistic production of the Belgian Rene Magritte and the French Ives Tanguy. In both cases the artwork becomes a means to explore existential themes, questions that have always belonged to the human being, themes that are not explained by the artists but simply brought to light to leave the observer the task of interpreting their meaning and finding an answer.

Anneli Di Francis, Finnish artist, combines in her works the unreality, visionariness and anxiety of the most classic Surrealism with the tendency to analyze and deeply explore the concept typical of Metaphysics, giving life to a fascinating style that on the one hand shakes the observer for her strong images of great emotional impact, but on the other hand induces him to meditate on himself, on the destiny that goes day after day building, and to open his mind considering possible scenarios that could be outlined in the future world.

Although she entrusts the narration to individual characters, the themes that Di Francis tackles are social, environmentalist, existential, and she does so by moving between a real universe and a parallel one that suggests a glimmer, the possibility of salvation if only the individual can get out of his cages, his immobilizing behavior, the destructive actions against himself and the earth in which he lives.

The work The Warning deals with the concept of time, that indefinite essence that delimits the passage between birth and death and that is often underestimated because it is considered eternal; the error of contemporary man, Anneli Di Francis seems to warn, is to forget how fast his passage on earth is and how important is to use and appreciate every grain of instant without wasting it, before finding himself at the end of the path regretting what he let go and what he could have done if he had been more aware. The indefinite entity, half man and half animal, seems to be the ghost of the past, the sum of regrets that inevitably accompany those who have not been able to understand the essentiality of living every moment.

The canvas He can never speak revolves around the individual’s inability to free himself from the shadows within which he places himself, behind barriers made up of silences, inhibitory brakes and masks that prevent him from letting his true nature out into the sunlight; or, according to another interpretation, the fear of not being accepted or that his own ideas will not be welcomed outside induces him to barricade himself behind the incommunicability that now seems to be one of the main causes of the loneliness of today’s life.

The work The lament instead, moves on the environmentalist theme revealing a deep attention and sensitivity of Anneli Di Francis towards a nature that too often is neglected and taken for granted by the man who inhabits it; and too often the human being becomes the enemy and destroyer of the habitat that welcomes him and that feeds him and that he should protect rather than destabilizing his ecosystem. Here, then, the woman protagonist cradles, trying to repair a damage now committed, an agonizing bee gently accompanying it towards its final disappearance.

The same warning emerges in the work The Yellow Lemon, the only note of color, and therefore of life, in a post-apocalyptic scenario in which everything seems to have become dry and sapless, from the earth behind the protagonist to the sky, faded and pale because deprived of the vitality generated by nature, by an atmosphere clean and healed by plants. The only salvation for humanity, suggests Di Francis is to protect and safeguard what remains to hope that, by virtue of the ability of every form of life to regenerate and adapt to the new reality, it is not too late to recreate that spark sufficient to reproduce and regain the world.

During her long career, which began with her studies at the School of Art and Crafte in Tervola, Finland, after which she decided that art would be her life, from 2008 to the present day she has taken part in numerous international collectives exhibiting her works in Japan, Germany, USA, England, Italy, Austria, Portugal, South Korea, Macedonia, France, Belgium, Holland, Turkey, Switzerland, Hungary, Spain and, of course, Finland; over the years she has received many awards and recognitions and her paintings are part of private and public collections around the world, including the Haegeumgan Theme Museum, Geoje, South Korea.