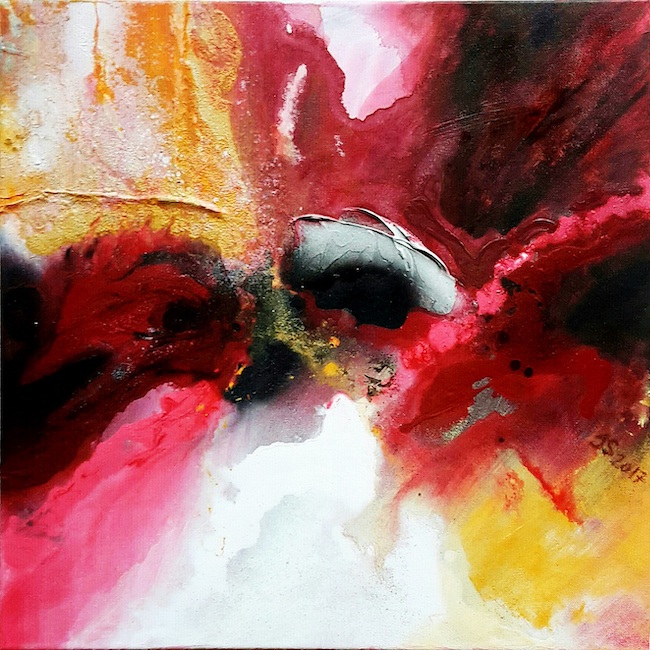 The expressive impulse of many artists needs to be manifested immediately, often unaware of the emotion that will arise when the work is finished, because the creative process is unconscious and separated from the rational mind and above all because that interiority harnessed within cannot accept rules in the free manifestation of itself. Today’s protagonist has this kind of characteristic that allows her not to meditate, not to reflect on what she is about to narrate in her artworks, leaving her inner vibrations to voice.

The world of the emotions had been excluded from the creative act throughout the avant-garde period of the first half of the 20th century, when the disorientation caused by the loss of certainties and values following the two world wars and the advent of the innovative technique of image reproduction, photography, had determined the need for artists of the time to detach themselves from an observed reality in which there was no longer the pleasure or aesthetic taste of the previous era, that of the Belle Epoque, and at the same time had lost the sense of narrating what could be immortalised in a mechanical and cold way by a technological apparatus. All the movements of the beginning of the last century were therefore based on a different point of view, that of the purity of the pictorial act that had to transcend everything that the eye could see around it, declaring the supremacy of art over any existing form; or on a decomposition, an interpretation and a representation of the image in phases of movement. While Cubism, Surrealism and Futurism remained tied to figuration while choosing to represent it in a new way, overturning all academic rules on perspective, chiaroscuro, drawing and relevance to reality, on the other hand there were numerous currents that affirmed the need for detachment from form in order to instil purity in the creative act, while remaining in an overly intellectual sphere that distanced the observer from contact with the inner world. Constructivism, Geometric Abstractionism, De Stijl and Spatialism were conceptual, mental to the point of seeming cold but fundamental for that particular moment in history. However, as the decades went by, they showed their expressive and emotional limits, also by virtue of a newfound need on the part of another group of artists, who continued along the path of the important function of non-form, of rediscovering contact with the inner world, with that irrational and impulsive sphere that necessarily had to be linked to the pictorial gesture, to the most intense, most immediate and spontaneous creative act. Abstract Expressionism brought about a reappropriation of that contact with the artist’s interiority which was essential even in the universe of non-figuration, of the indeterminate, and capable of giving the executor of the artawork the freedom to let sensations and emotions flow without constraints and rules, using the canvas as a narrative of intuition, of the perception of the moment. The Austrian artist Judith Seiler Schlömmer needs the communicative freedom of Abstract Expressionism to interpret everything that revolves within her soul without, however, being aware of the message she wants to convey, not until the moment when she begins to give life and form through colour to that intuition which suddenly becomes defined as she goes on with the execution of the artwork.

Sometimes her attention is focused on details observed from the landscape around her, at other times the moments she feels the need to describe are those of thought, reflection, the internalisation of a circumstance of existence, of a natural inclination of contemporary life that is also reflected in her own way of seeing and feeling.

The colours are used as a narrative weave, perfectly in tune with the expressive intention, skilfully shaded and juxtaposed to highlight the impression, the predominant feeling and to place it at the centre of the scene, albeit in its impalpable essence, undefined precisely because it is intangible.

In Layer by layer, Judith Seiler Schlömmer emphasises the countless veils that contemporary man uses to hide himself from the world, his fragilities, his scars that could make him vulnerable, even though, as is evident in the canvas, it is not possible to ignore these wounds because they somehow manage to find a way of emerging, not only on the outside but above all within that part of himself that would like to forget them.

In Schau mir ins (Look at me), the artist chooses a smoky, evanescent and impalpable range of colours, as if in that invitation was hidden the request to dissolve the blanket erected to cover a true essence that silently hopes and waits to meet someone capable of going further, of observing the reflection behind the gaze, that which reaches deep into the soul, to reassure a fragile interiority.

When, however, Judith Seiler Schlömmer‘s creative intent dwells on the description of a fragment of an image perceived around her, the tones are in tune with the ones of the outside world, those that are more real, or vivid and lively, because they are outside the emotional and intimate universe; for the painting Herbstspaziergang (Autumn Walk) she chooses the colours of the season in which all of nature seems to fall asleep, to end its life cycle and begin another, and thus the artist’s pictorial emotion is also linked to that inevitable melancholy that envelops not only the landscape but also the way the sorrounding view is perceived.

In Landscape (Panorama), Schlömmer dwells on a sunny view, probably absorbed during an afternoon in the countryside, of which what has remained is the positive, fresh, playful emotion of an ordinary but at the same time extraordinary day, capable of instilling an inner peace that has been deposited in the memory and that creative inspiration asks to be expressed at a later date, thus involving the observer in a perception that is familiar because it was shared at another time and in another moment. The tones chosen are those of the earth, the sun, the plants, as if the smells and light-heartedness of what it has beeb seen could not help but continue to emerge smiling in the artist’s mind.

After starting out as a self-taught artist, Judith Seiler Schlömmer decided to attend painting courses at Austria’s leading schools – Professor Rudolf Szyszkowitz in Graz, seminars with Master Erich Maier in Salzburg, Aka Painter Efti Schlamadinger in Graz and with Hermann Nitsch – and has had numerous group and solo exhibitions in her country and abroad.