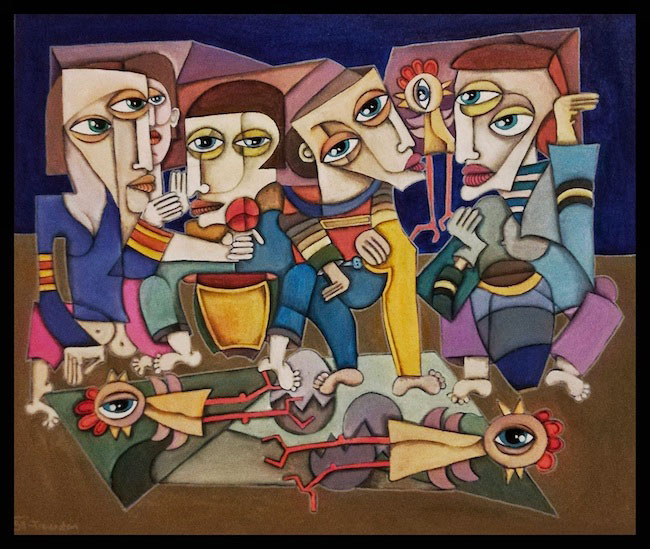 Exploring the complicated dynamics of interpersonal relations of the time we are living in is not easy at all, because the individual facets are several, so as they are the points of view that are now outside the generalizations and schemes that had regulated them in the more or less recent past. Today’s protagonist makes this exploration the basis of her extraordinary and original expressive manifestation.

Isabella Steindl was born in Freienstein, Austria, from here the pseudonym with which she signs her works, Isabella von Freiestein, and arrives late to figurative art, although she moved for many years within the artistic world, that of dance; but, as often happens, what is unconsciously latent tends to manifest itself until it becomes irresistible, so the painter who was inside her came out in a bursting way inducing her to choose art as her path of life. The style chosen, decidedly uncommon among contemporary artists, is that of Neocubism, heir of the important movement of the twentieth century of which Pablo Picasso was the founder and greatest exponent. In the second phase of Cubism, the so-called analytical phase, the artist tended to break down reality to observe it simultaneously from different points of view, subverting in fact all the traditional rules of perspective and breaking down what the eye sees to recompose it into a new form, distorted precisely because more versatile.

In von Freiestein‘s works the cubist multiplicity is evident, strong and necessary for her explorative journey, even if in her personalization take over more softer, rounded forms, not limited to geometry but strongly disorientated and disorienting in the description of the physicality of the protagonists of her canvases.

In some way the works are contaminated by the Thangka painting of Tibet and by the Hindu painting linked to religious deities, in which some details are represented as animated laces, in which the colours are lively and intense, even if unreal, in which the perspective is cancelled to give relevance to the two-dimensionality of the image and in which the divinities are represented with many faces and many arms to narrate their ability to be everywhere and to see every facet of things.

The work in which the influence of Indian art is most evident is Closed society, where the leading women, represented in a moment of leisure, are surrounded by unreal plants and flowers, almost in motion, floating behind the same characters; from a psychological point of view, the girls reveal the boredom of having to distinguish themselves at all costs from those who do not consider appropriate to enter their circle, consisting of objects and habits, gossip and haughtiness, which often only serve to fill the void of the lack of a true and deep essence. The artist goes to investigate the difficulties of interrelationships, in her hermetic artworks the glance of the observer gets lost in trying to understand, to discover the references, concepts that are hidden within the scenes depicted, where there is no above and below, where there is no beginning and an end or a clear point of view. Isabella von Freiestein skillfully moves on a mobile ground, that of the contemporary world which, even though it considers itself free, often cages itself within schemes and pre-packaged structures to which people conform.

In the work Conflict she deals with the theme of gender transformation, that moment of limbo in which the human being lives the awareness of not feeling well in his skin but has not yet found the strength to take note and consciousness of the need to make the transition that would make him feel at ease. The conflict of the title is not only the inner one but also the one of the fear of the judgment of a community that, despite the progress, is not yet sufficiently ready and open to a third identity that the protagonist feels strong within himself.

The painting Whailing was the beginning also hides a lucid and profound reflection on today’s society, one in which all men want to draw out the largest fish in the same sea, triggering a mechanism of cause and effect by virtue of which everyone must watch their backs from the next, constantly ready to compete to take the best place, the highest prestige, the most advantageous return even at the cost of damaging those who are alongside.

And again in the work Nothing is free the artist seems to bind himself to Buddhism through the karmic concept that everything has its price in the evolutionary path, that everything we do has an equivalent value in the universal law with which sooner or later, for better or for worse, we are called to deal, all of us, no one excluded. In the course of her career Isabella von Freiestein has been nominated for the Kitzart Award and the Palmart Award; she has also been awarded the international artistic prize Artmaster Australia International and the Michaelangeloprize at Palazzo Cardinale Cesi in Rome; her particular and original works are included in various art magazines such as International Contemporary Magazine, Artsillustrated and Art & Crafts Magazine. She recently started the production of t-shirts where will be reproduced some of her artworks and will be purchased on website Unicartem.