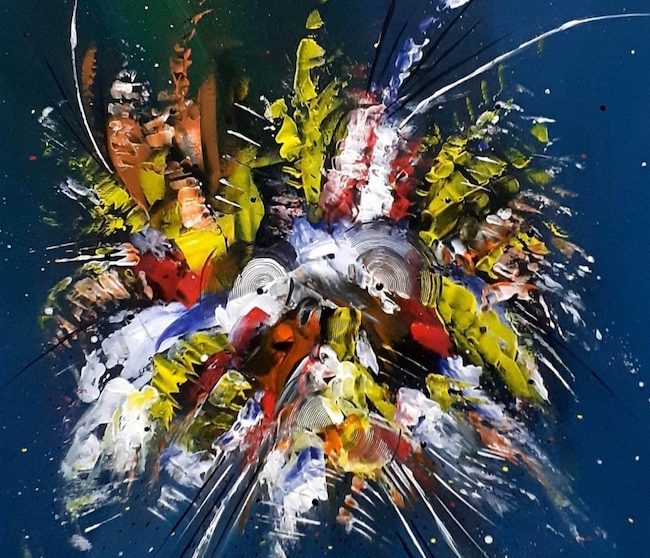 The art of the twenty-first century has taken on, and continues to take on, characteristics of mutability and contamination between various styles that distinguish not only painting and sculpture, considered to be more traditional areas, but also the new creative approaches born in the twentieth century and which today find new expressions. Under the light of this research, digital images take on the appearance of pictorial works, informal canvases introduce objects that seem to be reabsorbed into the general context and so on; there are also purely pictorial approaches that give the illusion to face on a material element, even though they do not have it.

When, around the first half of the twentieth century, the main aim of the artists of the time became to affirm the superiority of the concept over figuration and the autonomy of form over the faithful reproduction of reality, it was not foreseen how these principles would evolve over the following decades. Abstractionism decreed that detachment from everything that had formed the basis of the pictorial movements of previous centuries and underlined, through various and different languages, how it was not necessary to stick to known and recognizable images to excite or to approach aesthetic purity. On the one hand, emerged more rational, almost mathematical currents, based on a rigorous order and complete abstraction until the sublimation of colour as only artistic sense, as in the case of Geometric Abstractionism, Spatialism, Orphic Cubism, the Informal and Suprematism, on the other hand, despite the absence of defined forms that could be associated with what the gaze could observe in everyday life, emerged the need to use the random juxtaposition of tonalities and the instinctive execution of the work, which characterized Lyrical Abstraction and, shortly afterwards, Abstract Expressionism. As the decades went on, these once well-defined and delineated currents mixed and contaminated each other, giving rise to new and fascinating pictorial evolutions as much as the foundations from which they started, stimulating the creativity of the artists who opened these new paths. So the balance between one style and another becomes a fundamental and distinctive element of a pictorial approach where the expressive freedom that was so dear to Jackson Pollock, farsighted founder of Abstract Expressionism, who highlighted the importance of emotion, of communicative instinct, over the final representation on canvas, thus welcoming in his movement artists completely different from each other but all with an extraordinary ability to make the strings of the observer vibrate. Ružica Skoko chooses the strenght of Abstract Expressionism’s impact while diluting it with a meditative imprint, of reflection on existential or simpler themes, than those arising from the observation of nature around her.

Another characteristic that distinguishes this Croatian artist is the optical illusion that she manages to generate, using only acrylic colours, that in her canvases there are material elements that complete the final image.

The reality is that by virtue of her meditated and slow approach, she gives details a sense of depth and plasticity capable of reproducing the presence of an object, of an external intervention that enriches the simple pictorial touch, without having introduced it. Not only, although her style is decidedly Abstract, the sensation is that of being in front of figurative works of which Skoko frames only a small detail, as in the Macrophotos in which a particular becomes the absolute protagonist of the reproduction; this optical illusion fascinates and conquers the observer who finds himself involved from the emotional point of view, from the rational one and, finally, from the reflective one that the artist manages to arouse.

When she tackles existential themes, those that belong to the soul of each individual, as in the work Geborgenheit (Sureness), Ružica Skoko infuses colours with the function of warming the background to highlight the sensation that can be felt when one finds himself wrapped in a casing, an envelope that is a need to protect, and at the same time seems to invite that shell to open up without fear towards the outside, a place of light and sunshine that is only by letting go that it is possible to appreciate in all its nuances.

In Hochzeit (Marriage) the artist emphasizes the encounter, the union, which finds its culmination in the articulated and decorated central line, between two different parts that decide and choose to merge their lives to generate a new one, together, while maintaining the diversity that must continue to characterize the personalities of each one; in this work too, the central part chooses the semblance of relief, as if to emphasize the wealth that comes to life when two souls meet and intersect, wealth that is amplified precisely because of the differences that are not an obstacle, on the contrary, they become a strength.

And again in Verbundenheit (Connection) the dark background is masterfully used by Ružica Skoko to underline that particular electricity, that vibrant moment in which the energetic exchange between two individuals takes place, that spark that captures the attention of the protagonists for an instant or forever, it doesn’t matter, what matters is how strong is the instinctive bond that ignites and illuminates the mind and interiority for the time that remains.

Even when describing everyday realities, as in Sommer Wiese (Summer Meadow) and Raupe am Blatt (Caterpillar on the Leaf) Skoko confuses the viewer’s gaze, who is convinced to face figurative works despite the fact that they are, once again, a manifestation of the optical illusion that she manages to instill in the canvases through her Abstract Expressionism. A painter and philanthropist, Ružica Skoko has taken part in numerous group exhibitions and international fairs in Germany, Croatia, Italy, Luxembourg, Austria and Spain.