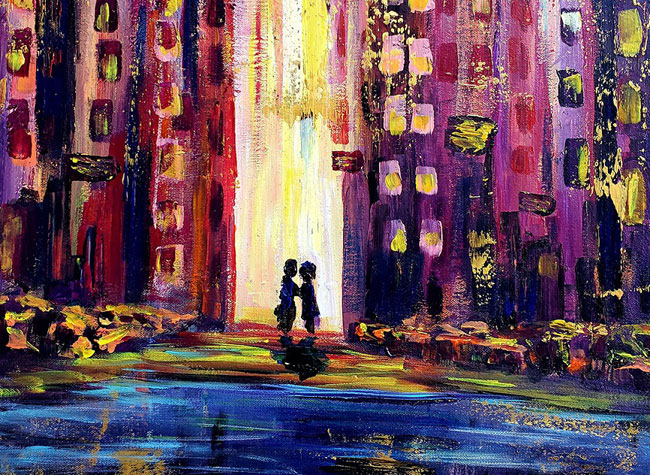 Talking about some artists means to be literally catapulted into their unconventional world, overwhelming and at the same time very exciting; in the case of today’s protagonist his sunny, positive and lively personality, cannot fail to emerge from his canvases that represent a meeting point of styles skillfully combined in a unique way.

The artistic current of Expressionism has involved many great artists of the first half of the Twentieth century, even if some of them have detached themselves from it evolving towards other pictorial movements, and it wanted to present itself as detachment and opposition to other currents of the time, but especially from the just prior Impressionism, from which she wanted to distinguish for the ability to emphasize the subjective feeling through which the artist could communicate to the viewer his vision without following the rules of objectivity. Shortly after the Second World War, in the United States borned Abstract Expressionism, the natural evolution of a movement that aimed to emphasize the importance of freedom of expression and the breaking of patterns and rules of figuration, characteristics that have marked the entire artistic landscape of the Twentieth century and that have allowed the artists of those period to tell, each one in its own way, the progress of time. In the current century everything has been overcome and is already beyond; the creative freedom obtained in the previous era, in which in any case there was a clear boundary between the various avant-gardes, each one of them with a singular approach and with a philosophical thought different from the others, which had started the process of artistic emancipation, is now even more accentuated as the autonomy of the individual not to belong to any group or movement and to mark new lines and new styles that can remain absolutely individual.

This is exactly the path taken by Kevin J. Padilla, American from Los Angeles, a city from which he absorbs the positivity and the solarity that characterizes him and that comes out, overwhelming, from his works; the way of living and seeing life is bright, optimistic, in search of simple emotions and precisely for this reason beautiful, in the belief that every day is the right one to find a reason to be happy.

His style is a synergy between Abstract Expressionism, in the colors that are a manifestation of his interiority and in the forms just mentioned to make undefined objective boundaries that can not contain the emotions, and Impressionism, for the characteristic of giving short and fast brushstrokes necessary to leave memory of an image that, although interpreted through the deepest feeling, still remains to tell and reveal the possibility that a different point of view can change the reality that every day presents itself before the eyes.

In Rainy summer days is particularly evident Kevin J. Padilla’s philosophy, that it should never be a rainy day to be able to change the colors with which people look at the world around, because everything that is necessary to smile at the beauty that can be found even in an urban landscape made of skyscrapers and streets, is enclosed within us, it depends on us whether to see the soft shades or the most gray, whether to glimpse buildings or the pulsating life that hides within them and in the streets.

Lover bliss is also an exhortation to look and search for emotions, and Padilla does this through colours, the purple scale – a colour linked to the soul and interiority – in all its shades, and also by highlighting the two lovers by placing them at the centre of the scene, small among the skyscrapers yet large by virtue of the feeling that unites them and that, in turn, has the power to modify the perception of the surrounding reality.

And again in Between the veil, it seems to call the observer on looking beyond, under the veil of objectivity to search for sensations, that deepest contact with the self that too often seems he wants to hide under the everyday life, behind the things to do, the traffic, the impediments that man himself seems to create to avoid looking inside and sink into an emotionality that often is not able to support; that same inability becomes the basis of the incommunicability between people, that look at each other even every day without really seeing each other, without recognizing anyone.

That’s why it becomes essential to regain possession of the relationship with nature, as Kevin J. Padilla suggests in his work Romance in the rain, where the landscape is particularly indefinite, only hinted at by short and rapid brushstrokes, just to give relevance to the whole of the emotional beauty that from the contact with simplicity manifests itself, to emphasize the strong bond with that nature in which man can not forget to be just a man, delicate and fragile in its interiority as strong and resistant in a complex everyday life, but in the end a starting point for reflection and inner growth. Beauty is hidden in every detail, happiness can be found everywhere and joy in the end, is within us. Kevin J. Padilla, from 2009 until today has participated in many group exhibitions in the United States and abroad, meeting great success with the public and its many collectors.