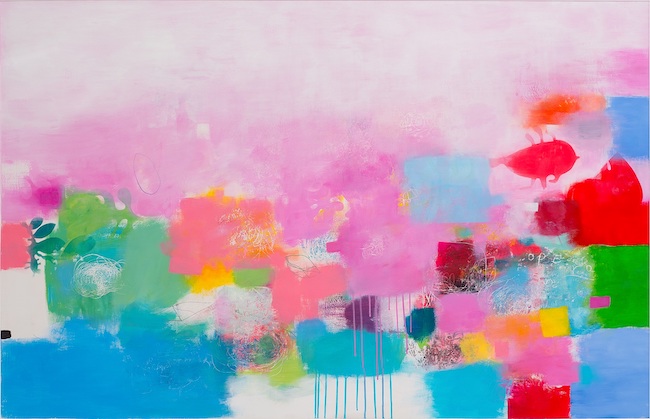 For some artists the canvas is not only a means of expressing and letting go of their emotions, but also a blank page to be enriched with a higher, more lyrical language than would be chosen if feelings were expressed in words; many of these creatives choose a positive approach to existence and the wonders it conceals behind every fold, every possibility. Today’s protagonist belongs to that category of artists who are able to spontaneously convey their open and smiling point of view towards the world and everything that revolves around the individual.

The focus of the birth of one of the most preponderant and important movements of the mid-twentieth century, Abstract Expressionism, was the impellence to prioritise the emotional impulse, to the spontaneous letting flow of all that whirlwind of sensations that had been excluded from the whole previous path that, starting from Impressionism, had led to the need for an ever greater decomposition of the known image until reaching the complete detachment from the observed reality and the affirmation of the superiority of the pure plastic act over the need for the viewer to find within an artwork what was already known to him. Jackson Pollock and all the other artists who opposed the previous movements – Suprematism, Neoplasticism and Geometric Abstraction – wanted to recover the importance of feeling, of the artist’s intimate pulse, and to affirm the necessity that everything that could be perceived with the interiority, the subjectivity and the sensitivity of the executor but also of the observer, could in no way be separated from art. Although for some of the Abstract Expressionists, such as Pollock himself but also his wife Lee Krasner, who was also an artist, Willem de Koonig and Franz Kline, the act of painting was impulsive, immediate and at times impetuous, in others belonging to the movement a different type of manifestation was evident, one that was more moderate, more serene and sunny, softer, and thus capable of arousing different emotions in the observer. The two exponents of the movement who most of all revealed this type of outlook on the surrounding reality and their typical smiling positivity were Helen Frankenthaler with her delicate pastel shades, and Hans Hoffman in whom the vivacity of the colours is flanked, and enhanced, by cheerful and irreverent geometric shapes, placed within the canvas to break a balance but also to give order to what would otherwise be confused. Croatian artist Franko Tenčic draws on both masters of Abstract Expressionism to create artworks of great visual impact that envelop the viewer in a poetic magic that he cannot help but be transported by.

It is an attitude open to the beauty and pleasantness of everything that life, everyday existence, is full of, a sunny approach to events and an ability to see la vie en rose, which does not imply an inability to look at what is happening in its entirety and complexity but rather to find the positive side, the way out in everything that apparently may not have any.

His artworks seem to be poetic agreements, a point of mediation between contingency and the need to rise to look beyond it, a suggestion to the observer to watch events from a different point of view, unprecedented precisely because able to shed light and luminosity on a daily life that too often tends to generate shadows. As Franko Tenčic seems to suggest, the moment the angle of observation is changed, the gaze is able to grasp the beautiful, pleasant, stimulating side of the events and experiences with which each of us inevitably has to deal, and the mind opens up to a different attitude, more possibilistic, more inclined to seek a solution rather than dwelling on the problem.

The range of colours is in keeping with this soft, serene and lyrical way of crossing existence and everything that is part of it; the most recurrent shades are pinks, whites, light blues and yellows, pastel colours through which Tenčic takes the observer by the hand and leads him into his quantum world where everything can be different from what we believe it to be, where reality can be modified and transformed but above all interpreted by virtue of the emotional filter through which it is experienced.

Tenčic alternates transparencies and fades, superimpositions and evanescence, impalpable circular shapes with clear-cut strokes obtained by drawing inside the canvas, as if to underline how the indefinable is such despite the natural impulse to give a stop to its fleetingness.

The artwork Metamorphosis 1 is a symbol of how much every single instant can turn into something else, how everything that is at a given juncture is only an infinitesimal piece of reality in constant movement and evolution and therefore, whispers the artist, it is much better to live the here and now fully and with an open attitude, because after all it is part of a moment that will never return and therefore it is worth facing and living it. On the other hand, smiles Tenčic, it is much better to let go of the changing circumstances and open one’s arms to the new, rather than placing oneself in a defensive posture and clinging to something that is anyway bound to change.

In the painting Mai 2020, the artist detaches himself from the contingency that has enveloped the world, that of Covid19, to turn his gaze towards the beauty of spring, its bright colours, nature reborn and regenerating itself, inviting people to rediscover the pleasure of the small things, of the imperceptible miracles that happen all the time around and are often overlooked; it is a suggestion to raise one’s head and look towards the sun rather than let it recline, an exhortation to go further and let one’s gaze wander over the pleasantness of living rather than the momentary difficulty.

Philosophical reflexions 6 openly reveals Franko Tenčic‘s ability to experience every moment, even that of meditation, of contact with one’s inner self, as an opportunity for growth, a spontaneous openness towards new possibilities, new alternatives that only reveal themselves after careful introspection; despite the depth needed to observe and find meaning in things, what remains fundamental to Tenčic‘s entire artistic production is his poetic glance, his ability to see the soft, fluffy, musical side of what is happening around him and his inclination to make it become a stimulus, a solicitation for the observer to let himself be rocked by the radiant predisposition that distinguishes each of his canvases. Franko Tenčic collaborates with architects and interior designers on an ongoing basis, and his works, as well as being exhibited in his art studio, are displayed in numerous hotels and public buildings, and are part of private collections in Croatia and around the world.