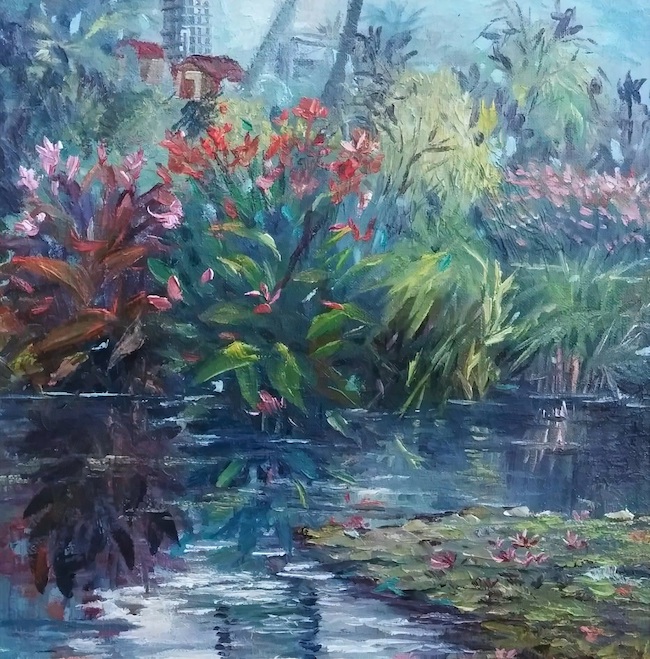 Among the contemporary artists, freed from the more traditional schemes of classicism by the movements of the last century, which somehow still tended to delineate the boundaries of membership necessary to make different expressive voices be heard and disconnected from the past, there are some who instead prefer a more classical pictorial approach. The artist I am going to tell you about today narrates his emotions and memories with a style of the past that fascinates and cloaks his works in a romantic atmosphere.

The first artistic revolutions that marked a detachment from the more rigid canons of painting of previous eras, came to life between the end of the 18th and the beginning of the 19th century with Romanticism, in which nature took on predominant importance in the artworks and where man became a comprimary presence in paintings, sometimes even completely absent to give space to the artist’s sensations when he was confronted with breathtaking landscapes that are indelible images in the history of art. In particular it was the Sublime Romanticism of William Turner, capable of arousing overwhelming emotions with the reproductions of glimpses of his England from where emerged the enchanted and captivated gaze with which the artist observed nature, its impetuous force but also its soothing and reassuring atmosphere, but above all its innovative painting technique that eliminated drawing to let colors and light give body to the images, to mark a real innovation in nineteenth-century painting. Turner‘s artistic production was fundamental for the subsequent movement that precisely from his innovative pictorial approach drew many of his guidelines: Impressionism. The artists belonging to this current of the late nineteenth century wanted to detach themselves from drawing to choose the predominance of the final overall figuration generated by the fast and rapid juxtaposition of colours and light that by themselves were literally able to give life to unforgettable panoramas and glimpses precisely because they aimed at aesthetic research mixed with the instinctive emotions that flowed from that observation of nature. Mat Relox Mangyan artist, an artist of Filipino origin but long time resident in Los Angeles, chooses the same attention to nature and attitude in painting ‘en plein air’ that were typical of Turner and later of impressionists, especially Renoir and Monet, to represent the beauty of the places from which he feels wrapped and that are able to arouse in his sensitivity those emotions, intense sensations that come out of his landscapes. The ability to bring the images to life thanks to light touches of colour that he skilfully mixes to give light to certain details as if to highlight them despite the fact that they are often not the centre of the scene, combined with a romantic, soft and enveloping atmosphere, perhaps to underline how welcoming and reassuring the nature that surrounds man is, are essential and distinctive features of his pictorial approach. Mat Relox loves to tell about the city where he lives, that Los Angeles that hides corners immersed in nature such as Echo Park, source of inspiration for many of his paintings in which the artist describes the sense of calm but also of wonder that he cannot help but emerge every time his gaze is lost among the plants and waterways that cross the large park.

In the canvas Echo Park, the beauty of Los Angeles, emerges a natural inclination to dwell on the wellness that that environment made up of trees, bushes and flowers is able to instill in Relox’s interiority, recounting the details with the typical Impressionist ability to leave out the boundaries of the structure given by the drawing to give space to the juxtaposition of shades spread with small and delicate brushstrokes necessary to infuse the sense of movement caused by the breeze.

The same enchantment with which he approaches the work Reflection, a detail of a stream that slowly creeps into the shrubs and reflects the image, amplifying the calming effect of the landscape.

Although he has lived in the United States for years, Mat Relox does not forget the views of his island of origin, Mindoro, an idyllic place of peace and harmony that makes him the protagonist of works such as Golden Harvest, in which he tells of a fragment of the life of his people, the Mangyans, made up of simple gestures, small things capable of filling existence and giving a pure happiness, not exciting but more whispered and however constant over time.

This work highlights the lack of a dimension that is distant and different from the more dynamic one of the country where the artist currently lives, a place of nostalgia from which his emotionality struggles to move away because, after all, it is necessary for him to bear witness to his people and his world.

In portraits the romantic touch softens, the expressive rhythm becomes more poetic precisely because he uses that sense of melancholy for what is no longer part of his present while remaining alive in his memory and his desire to tell the details; in the canvases Waiting for the date and The sash of faith, the style comes closer to Realism, even if never abandoning that rarefied and magical atmosphere that distinguishes all Relox‘s works, narrating the deep emotions of the two protagonists, the trepid wait for the arrival of the beloved in the first painting and the reassuring presence of that enveloping sash representing faith, life support and foothold in the journey of the human being in general, and of the woman portrayed in particular. Mat Relox loves to dwell on traditional clothing, to keep alive the characteristics of a people, an ethnic minority that should not be sidelined and that, thanks to his engaging art can emerge to the knowledge of his many passionate collectors.

In the course of his career Mat Relox has won numerous prizes and awards of international importance, has participated in about three hundred group exhibitions around the world and has made five important solo shows in the United States; he is a member of La Habra Art Association and is one of the founders of the Filipino American Artists Group. His works are part of private collections all over the world.