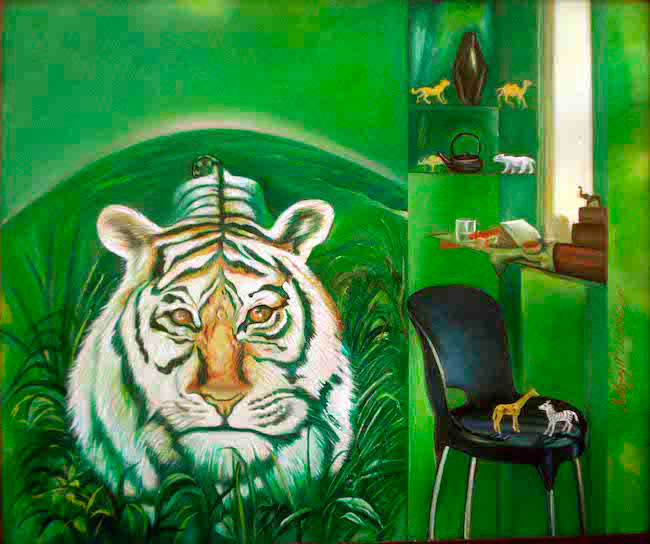 Nature fills the eyes of anyone who visits that fascinating country that is India, and is an integral part of everyday life while living with the most dynamic, fast, and metropolitan lifestyle of the big cities. Today’s leading artist, one of the promises of Indian art, chooses to tell the story of a world halfway between the two extremes, in which man tends towards that naturalness which he often has to give up in exchange for progress, but which at the same time he nostalgically encloses in the treasure chest of his memory.

Satyajit Chandra Chanda trained at the Government College of Art and Craft in Kolkata, West Bengal and then moved to Baroda to obtain a Master’s Degree in Fine Arts at Maharaja Sayajirao University; his academic training continued at the Kanoria Center for Arts in Ahmedabad thanks to a scholarship and then shifts to Mumbai. The contact with cities so different from each other, so differing in lifestyles, dynamism and race towards innovation in every field, allows him to be fascinated by the multiplicity of people, their approach to life, the different contact with routine often in contrast with the slow pace that is possible to breathe just outside the towns. His expressive eclecticism shifts from engraving to lithography, from screen printing to painting, and it is precisely in this last one that his closeness to a new Metaphysics is revealed, involving and at the same time delicate, as if his philosophical thought about the world and about existence were only hinted at, whispered, to leave to the observer of his works the deep cue for meditation, choosing the meaning that best suits the emotional strings of each one. The world of dreams, a fundamental characteristic of Surrealism that is often declined under the key of reading of the restlessness, the discomfort of a mind that transcends reality and that lives within it fears and nightmares that manifest in the unconscious, with Satyajit Chanda becomes a memory, in nostalgia for a contact with nature, the silence of which is covered by the deafening noise of the city traffic, where the scent of leaves bathed by the light morning fog is buried by the smog of cars, by the smells of cities that run and too often forget.

That’s why the artist mainly chooses to enclose forests, valleys and flowers inside jugs and glass vases that underline his exhortation not to destroy in the name of progress at any cost, to protect what we have regardless of the direction in which we choose to go.

In the work Oasis the mountain in the background is in shades of brown, as if life had been taken away from it, while what has been preserved within the precious amphora keeps the vital and vivid colours of nature as it should be, as it should remain when we look at it; and again in Forest Preservation, the dark, almost nocturnal tones of the urban landscape in the background seem to suffocate the reflective surface of the glass of the carafe that tries to hold back life which, inevitably, seems to be about to go out.

Satyajit Chanda seems to suggest the importance and urgency of regaining contact with simplicity and naturalness, with uncontaminated and wild landscapes, before being forced to see them only in a dream, as if they were being projected on a big cinema screen, as in the painting Nature is the ultimate, or reduced to be souvenirs sold by the Green Seller who appears as a carrier of the dream, of the memory of what was and that, by virtue of the carelessness of man, there is no more.

Finally, in the work Bondage and Freedom, the artist recounts a cage that constitutes not only the limit of the sense of human responsibility, but also the unconsciousness and superficiality that prevents us from understanding how much the dissolution of nature influences a much wider ecosystem that will reach man himself, because all the actions carried out have consequences of which we are often not aware until they manifest themselves. From a technical point of view, colour is used to narrate differences, detachments between an ideal world and the real one, sometimes stretched out in a clear and defined way, with the classic connotation of the Metaphysical style, and other times shaded, as if some details should be wrapped in fog, in the rarefaction that underlines the boundary between two ways of being that can only be changed through the awareness and choice of humanity. Satyajit Chanda has had many solo exhibitions at important institutional sites and galleries in India, such as the Academy of Fine Arts in Calcutta, he has participated in numerous group exhibitions, including the most important at the Prince of Wales Museum in Bharat Bhavan, at the Bombay Art Society in Mumbai, and received the Junior Fellowship from the Ministry of Human Resources of India and the Fine Arts Certificate of merit at the Bombay Art Society Award.