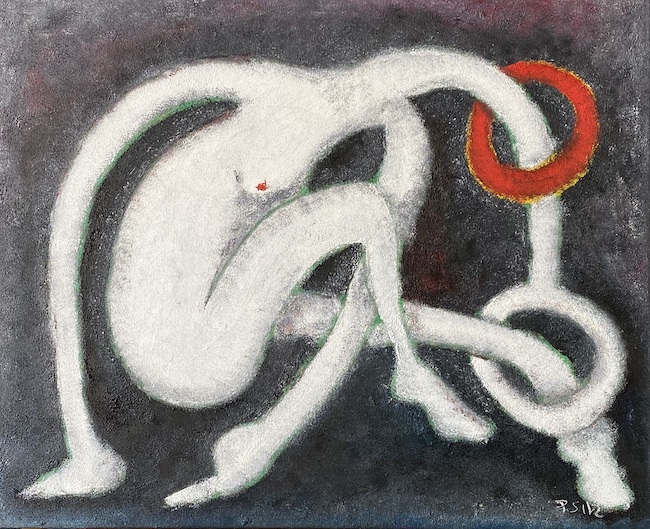 There are moments in each artist’s career in which the previous style changes and mixes, more or less consciously, with others more akin to an unprecedented feeling, to a point of view modified on the basis of the events experienced and the contingent circumstances that the author of the canvases finds himself living. The artist I am going to tell you about today has carried out precisely this kind of transformation, creating works of great effect that cannot but induce the observer to reflect on his recent existence.

The birth of the pictorial movement of Expressionism coincided with the strong need of a large group of artists of the early twentieth century to detach themselves from the pure aesthetics and beauty of the form typical not only of the coeval Impressionism but also of the previous pictorial currents, with some rare exceptions such as Romanticism, to give life to works in which the sensation, the emotion, was predominant. To this porpose it was not important if the form lost its attraction because, if the artist’s feeling was distressing and painful, it was necessary that the result on the canvas matched that state of mind, both for the image and for the colours used to narrate it. Edvard Munch, Egon Schiele, Vincent Van Gogh, to name just a few of the greatest members of the Expressionist movement, concentrated their creativity on the ability to describe the disorientation, fears and anxieties that belonged to a historical period in which the winds of war, the loss of values and the hard class struggles troubled european people, as well as the fragile sensitivity of the artists. Parallel to Expressionism, by virtue of a new attention to the individual and his psychology, to his subconscious, brought to light in particular by Sigmun Freud’s studies, arose another important pictorial movement which was destined to leave an indelible mark on international modern art, Surrealism. In this case what was necessary was to bring out the most unconscious part of the artist’s thought, the one that often manifests itself during sleep but is immediately forgotten afterwards; the Surrealist movement had as its prerogative to investigate in that subterranean world of the mind through deformed and decontextualised objects and images, more disturbing and distressing in the artworks of Salvador Dalì and Max Ernst, and more inclined towards an almost childlike vision for the simplicity of the forms in the paintings and sculptures of Hans Arp and Joan Mirò. The pictorial style of the Portuguese Paulo Saraiva da Silva, whose notoriety has crossed the ocean in virtue of the years during which he lived and exhibited in important collective and personal exhibitions in Washington, is a perfect synthesis of the two pictorial movements, Expressionism and Surrealism, of which he maintains the essential characteristics while giving life to a new language capable of mixing inarginable inner movements, an exploration of all those symbols and hidden meanings that envelop the existence of contemporary man.

His latest production is linked to a historical period that everyone will keep in their memory, that of the confinement due to the Covid19 pandemic, a phase during which da Silva was motivated to carry out a profound analysis of the sensations and fears that he perceived, explaining them in high-impact canvases immediately capable of capturing the observer’s attention because of the simplicity of the protagonists’ features, but which at a second glance induce him to reflect on the meaning that lies beyond appearance.

The naked bodies, though represented with minimalist traits, almost childlike in their innocence, represent human fragility in the face of an unexpected and overwhelming event such as an epidemic, which does not strike on the basis of colour, race or social status; so Paulo Saraiva da Silva underlines, in the figurative simplicity of his characters, the most real essence of the human being, that awareness, beyond what one possesses and what one is, of being a small fragment in time and space that survive its passage.

The circle, with which the artist describes the head of the narrated figures, represents open-mindedness, the need to understand and accept a profound change in lifestyle and habits in order to pursue a greater good, that of overcoming the threat and protecting the weakest people. The fingers, on the other hand, very often pointed at something or someone, bear witness to the imposition to which humanity has been subjected, that impossibility of leading the same existence as the previous day, new and sometimes intolerable rules to which, however, everyone has been forced to adapt.

Perhaps this is the reason why the bodies of the protagonists of da Silva‘s canvases are often twisted, rolled up on themselves, as if only in that way could they express their suffering and lack of freedom of action; if on the one hand loneliness has accentuated, suggests Paulo Saraiva da Silva, the inner conflict between adapting to what has been imposed or rebelling by recovering the decisional autonomy of one’s own life, while being aware of the risk, on the other has stimulated people to think differently, reviewing priorities and discovering new languages and new approaches to a modified existence.

As much as closure has allowed people to hold on more tightly to their affections, with which they can find a new way of being together and benefit from an amplified time that rarely, in contemporary life, can be dedicated to the other. Paulo Saraiva da Silva, currently living in Paris, during his long and brilliant artistic career has participated in many group exhibitions in the United States, France, Italy, Spain and Portugal and his works are in private collections and in important institutions in all the countries where he has exhibited and also in England.