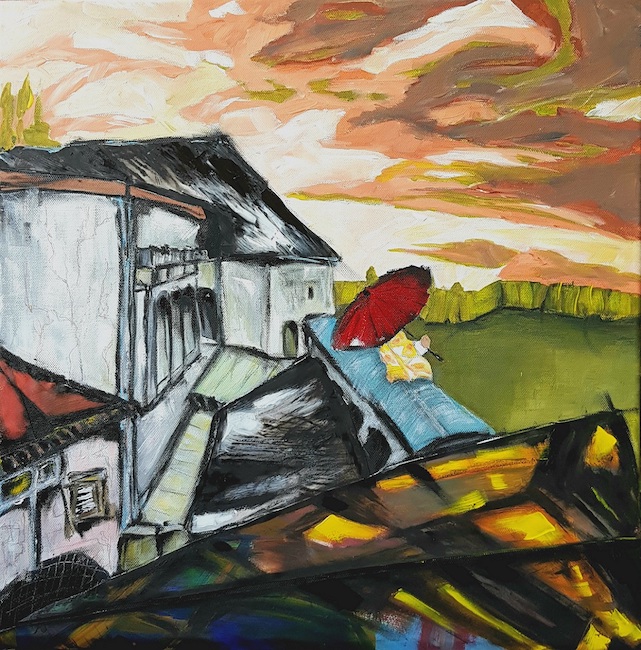 Creative manifestation has often been a way of escaping from reality, imagining different places and worlds, transporting the observer, as much as the executor of the artwork, into a new dimension, poetic or excessively realistic, but always far removed from the contingency in which he found himself at the moment of contact with the canvas. The artist I am going to talk about today has the singular characteristic of associating and correlating settings and subjects that appear to be something else but which give the viewer an image that is as unreal as paradoxically possible.

At the time of its birth, between the end of the 19th and the beginning of the 20th century, Expressionism set out to be the style of painting most akin to the clearance of the deep emotions of the artists who decided to adhere to it, and the priority given to individual feeling overrode the academic pictorial rules that had until then been the essential guidelines for artistic expression. Unreal colours, sharp outlines, the cancellation of perspective and chiaroscuro, the renunciation of aesthetic form in order to allow even ugliness to prevail, if it was in harmony with the interiority of the work’s creator. Inspired by the theories of the Fauves, who never managed to become a true movement although they did lay the foundations for a new approach to painting, the expressionists were characterised by their ability to convey their feelings, fears and anxieties that enveloped Europe in those dark years of uncertainty and of the winds of war, although in each country where the movement developed, different characteristics emerged, depending on the temperament of the people and, therefore, of the artists themselves. Northern Europe was characterised by the dark and tormented atmospheres of Edvard Munch, who was convinced of the tragic nature of human destiny and the masked hypocrisy of the bourgeois class, and the mad individualism of Vincent Van Gogh, who reflected his own disorientation and alienation from reality in his artworks; to the more vital and pleasant, though always rather lively, emotions of the German Expressionism of Ernst Ludwig Kirchner and Erich Eckel whose calm and fulfilment in the contact with nature could not fail to emerge in his intense landscapes marked by unreal colours in accordance with his emotional flow. Heidi Schütte Kunz, a talented German artist, chooses this pictorial movement to give space to her own creativity, which requires the simplification of forms and clear-cut outlines of the twentieth-century current to delineate and almost sculpt the rational boundaries of the elements that are the protagonists of her artworks, even though she chooses a range of colours that is less aggressive and strong compared to that of the Fauves, and more relaxed and playful compared to that which distinguished the masters Kirchner and Eckel.

Not only that, Kunz plays with reality, with the ambiguity towards which she directs the observer’s gaze to confuse him and take him into a world where everything can be something else, where objects are transformed and take on different appearances and meanings, where places can be where they are apparently placed but also elsewhere.

Visual deception is the greatest charm of the artist’s canvases, which she skilfully brightens up with fresh, clear, luminous tones, as if everything within her landscapes were an amusing and amused view of the reality that surrounds her. Heidi Schütte Kunz almost seems to embrace the Surrealist philosophy by virtue of her tendency to decontextualise objects and transfigure them in order to imbue them with a new, unprecedented, unexpected meaning, which cannot fail to attract the gaze and direct it towards those strange superimpositions from which the unexpected is generated.

In the artwork Nostalgia, the artist emphasises and highlights the feeling of melancholy by representing it with a piano from which the poignant notes linked to a lost memory can spread, but the same keyboard seems to be the road that leads the observer towards tomorrow, towards the distant houses that constitute the new path, the one that will be encountered after overcoming the link with the past. The right side is filled with the black of the piano, representing the ballast of something difficult to forget, while the left side is the light, the possibility of a new path, serene and open to possibilities, only after having overcome the step of the nostalgic bond.

In And beyond-the beach Kunz plays with perspective and also with the unreality of a beach umbrella poised on the asphalt, almost as if it were a mirage towards the beach hinted at in the title, which, however, is not visible, it is hidden beyond the edge of the road, and so the work appears almost as a metaphor for contemporary man who seeks and tends towards what he does not possess, what is not visible, and which exerts on him the charm of the unattained, of the unattained, giving him the illusion that it’s better than what he already has. The distorted house on the left side may seem an illusory and deceptive symbol, but also a bewitching one, of the unknown that attracts but which, as soon as it is discovered, loses all its magic to enter the field of the already discovered, of the already known and therefore no longer interesting for the purposes of obtaining it.

In Elements, the artist seems to decontextualise all the parts of the artwork in order to confuse and disorientate the viewer by means of an ambiguous, uncertain location, in which a windmill, normally placed near green plains, is instead behind a wooden tower used by the beach attendants, while in front of it there is an undefined background that could be land or sea, precisely because of the ambiguity that she instils in the observer by placing elements that are not normally close together.

In Golden Autumn, Heidi Schütte Kunz transforms a tree into a construction in which the branches develop and then spill out, or the house changes its essence, becoming itself a tree similar to the roots because of the solidity it represents, and because of its capacity to welcome even in difficult periods such as autumn, when nature dies only to be reborn; the house in this canvas is the place in which to take refuge to lick the wounds of the soul, letting sleep take over until the emotions awaken. The artist paints her own sensations, allowing her imagination to run free and to give life to a different world, curious and at the same time playful, serene, aware of how everything that is observed can have a different meaning from what appears at first glance, aware of how important the role of art is on emotions and sensations that cannot remain within an intimate world because they need to be manifested in order to be understood and welcomed.

Heidi Schütte Kunz teaches Art Therapy, and the path of awareness and of letting one’s deepest feelings flow is one that she knows well and of which she knows how fundamental it can be in the evolution and balance of each individual. During her artistic career she has taken part in numerous group exhibitions in Germany, Italy and China, and three of her artworks have been chosen as the covers of illustrated books for children and novels, precisely because of their characteristic of transporting the observer to an imaginary and pleasant world.