Home Lifestyle The art of Annika Korbitsch, poised between escaping from reality and the...
Facebook
WhatsApp
Twitter
Linkedin 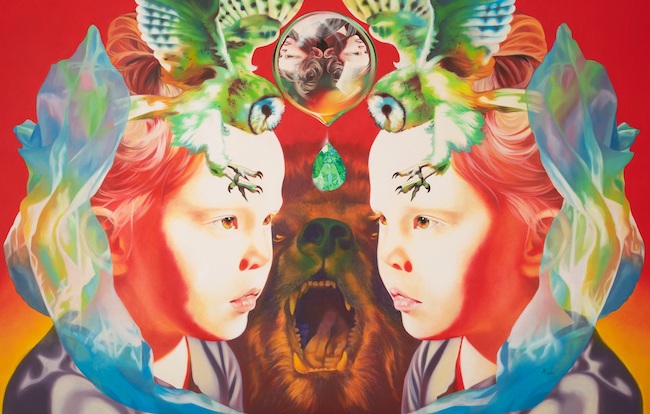 There is a dualism that belongs to some particularly delicate and sensitive artistic personalities, and which cannot be restrained and not to manifest on their canvases, almost as if within that ambivalence lies the real essence, the inner balance on which is forged not only the pictorial style but also the poetic and philosophical message that transpires from the artworks. Today’s protagonist lives poised between two opposing inner tendencies, yet both necessary to define her personality and also her creative expression.

The end of the First World War introduced the need for a considerable group of creatives to enter into a more intimate contact with their emotions, with the unconscious, with that world outside of reality that was able to constitute a hook to detach themselves and distract from the discomforts and precariousness that the war had brought, and at the same time also a need to find a stability that escaped in the surrounding environment and that could thus be found only within themselves, of a feeling that no external event could tear away. It was from this concept of immersing in one’s inner self, one’s nightmares, one’s fears in order to face them and externalize them, that was born the Surrealism movement, in which the often decidedly disturbing and distressing dream world was the protagonist of canvases that transported the observer to a parallel universe where non-sense took on an important meaning and where instead what made sense in reality dissolved completely within the lunar and unreal landscapes of its great masters. Salvador Dali, Max Ernst, Yves Tanguy in their incredible canvases narrated the search within a restless subconscious, the expression of those unconscious psychic paths that were at the basis of Sigmund Freud‘s studies, and that often turned into nightmares in which reality was distorted, deformed by virtue of the perception that each artist had of it at the conscious moment. As unreal the pure Surrealists were, as much tended towards the concept, towards questioning the mystery hidden within reality, the value of man and the meaning of existence, were the Metaphysical painters such as René Magritte and Frida Khalo, in whom, however, art became a personalisation, a more intense bond with her own personal history, with the life and love that marked and marked her existence. Annika Korbitsch from Austria has internalised the themes of Metaphysical Surrealism to adapt them to modern times and to her inner feelings, updating the guidelines of the movement and mixing them not only with an almost photographic realism, but also with image modification techniques belonging to the applications of today’s technological devices, although in her case they are strictly handmade, particularly in oil applied with a palette knife.

Her artworks, the portraits as well as the symbolic images to which she attributes a metaphysical, existential meaning, seem to want to escape from the canvas to enchant the viewer, who feels attracted by the contrasting emotions the faces seem to tell of and which belong to Korbitsch‘s inner self, that dualism which on the one hand induces her to observe and blame the reality of contemporary life, and on the other reveals the need to escape from it, to take refuge in an ideal, different world, where everything is simpler, natural and spontaneous.

Therefore, where, as in the painting Feder (Feather), the object represents a desire, a need for the artist as well as for modern man, to find that freedom and lightness, understood in the most positive sense of the term, in order to free himself from the weight and oppression of the rules and compromises to which it becomes necessary to submit, on the other hand in works such as Entscheidung (Choice), Annika Korbitsch shows how, despite the illusion of having the possibility of deciding which path to take, we are actually conditioned by a thousand chains that keep us trapped within a limited space, constituted by the big hand, which limits our decision-making capacity and places us within a safe zone that gives us the illusion of being secure but in reality prevents us from going further and discovering how many infinite possibilities lie behind that barrier.

And again, in Graf Fenryls Tochter (The Daughter of the Eagles), inspired by a fantasy fairy tale, the woman seems to express the pride and determination needed to take flight and be free; on the other hand, however, the presence of the two eagles, one in front and one behind her, seems in some way to be a limitation. They protect her, of course, but she always needs their presence to realise her dream of being able to fly. Annika Korbitsch often chooses to entrust children with the task of expressing what, in the adult world, remains unspoken because it is hidden under layers of conventions, brakes and diplomacy that do not exist at an earlier age.

Thus in Ihr seid geizig! (You are stingy), the artist emphasises individualism, the selfishness that leads human beings to careerism and the need to accumulate goods and wealth without stopping to look at or help a child who is reaching out his hand and who only wants attention and affection. Korbitsch moves on to a more global theme in this artwork, that of the gap between those who have a lot and continue to want more and more, believing that this is the best way to get on in life, and those who have little and seem to be invisible in the eyes of the other party, as if the meaning of life were reduced to achieving goals to the detriment of everyone in their path.

And again in Ihr urteilt! (You judge), the young woman looks with sadness at those who distance themselves from her rather than trying to understand what is hidden behind those unhappy eyes; here too the artist’s focus is on selfishness, on the blindness that prevents us from pausing to go deeper, to observe with greater attention and to empathise with the other person. Annika Korbitsch suggests that the distance that is created between individuals on a daily basis generates and nourishes misunderstandings, selfish attitudes and impositions or, on the contrary, disinterest, from which it is difficult to escape, precisely because it is deeply rooted in contemporary society.

Oil on canvas, on wood, pastels and pencils on paper, spatula: Annika Korbitsch‘s artistic experiments are varied and become functional to the subject she wishes to tackle from work to work, suspended in the balance between what is and what she would like the world to be. Having returned to the art scene after many years in which she had chosen a different path, Annika Korbisch is actively participating in many group exhibitions in Austria, Switzerland and Italy.