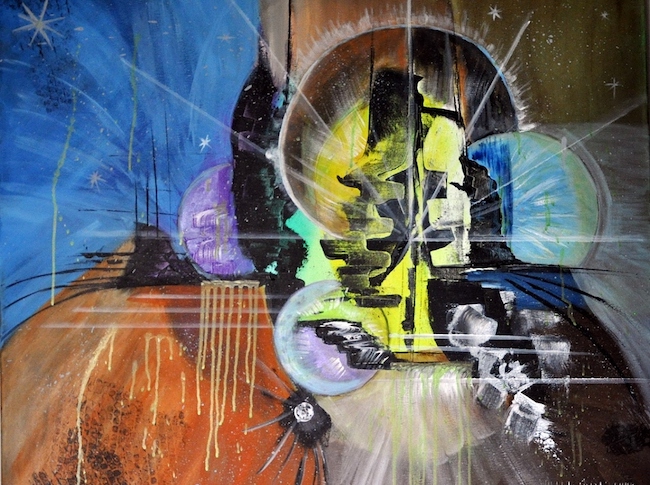 In the common imagination, the impetuousness of the painting technique first used by Jackson Pollock is absolutely linked to the purest, most instinctive and immediate abstractionism, precisely because of a rapid, swift gesture without any conditioning by the visible form. Anyway there are some artists who manage to reintroduce the more figurative side without renouncing the instinctiveness of that liberating and spontaneous act typical of Action Painting. Today’s protagonist reveals the particular characteristic of superimposing and making a more figurative part coexist with a more distinctly abstract one.

The painting technique of Action Painting spread in the United States around the 1950s, closely linked to the Abstract Expressionism movement in which the participating artists strongly wanted to recover and affirm the importance of pure emotion in a work of art, in stark contrast to the European abstract movements in which the plastic act had to be purged of any subjective intention of the work’s creator. The immediacy of the creative act of gestural abstraction and a completely different approach to the canvas, which was no longer placed on the easel but rested on the ground to allow the artist to let his emotions flow freely without any rational control, letting the colour drip randomly or even throwing it, splashing it, on the white surface, contributed in making the artwork be an extension, a prolngation of the most instinctive, primordial and unconscious inner feeling. Jackson Pollok and Lee Krasner, his wife, were the greatest representatives and users of Action Painting as well as of drip painting, thanks to which they not only gave life to a new way of understanding Abstractionism but also deepened that detachment from the real and observed form that would have constituted only a slowing down of the impulse, an interaction with the more rational and mental part to that the abstract expressionists wanted to renounce. The speed of execution and the ability to let go the emotion of the moment and to come into contact with the deepest interiority were essential characteristics of the artists who chose to express their creativity through this liberating technique, stripped of all contact with rationality and, consequently, with the objectivity of observed reality. The artist, of Croatian origin but naturalised Slovenian Blanka Dovgan, needs the immediacy of the spontaneous act of Action Painting while not wanting to completely renounce to a figurative part that in some canvases manifests itself as trompe l’oeil, while in others it remains whispered and latent beyond the abstract patina, as if its voice was to emerge clearly but discreetly in the chaos of existence.

In spite of the use of dripping, one does not perceive restlessness or impetuosity in her canvases, but rather a calm acceptance of the lights and shadows of life, an aptitude for analysing her interior in relation to the exterior with which she inevitably interacts; it is perhaps because of this tendency that Dovgan cannot renounce form, always placed at the centre of the canvas, as if she wanted to highlight a detail, directing the observer’s gaze to the nucleus of her artworks.

The tones chosen for the backgrounds are mainly dark, smoky, such as blacks or the grey scale, to emphasise the confusion that is often generated in the subject and in contemporary living, which is so distracting from the details that instead constitute the fulcrum of existence; for the central focus, on the contrary, the tones are strong, lively, enclosed within geometric shapes, perhaps to emphasise how much easier it is to keep emotions within a safe and protected zone rather than to manifest them and let them overflow into the environment in which everyone moves.

And it is precisely in those internal parts that Blanka Dovgan seems to converse with the observer, recounting with greater incisiveness the scratches of the soul, the fears, the sensations hidden within a self that at a certain point needs to externalize them, and she does so through grattage to make that message more incisive, that incitement to get in touch with what is frightening, with what belongs to the present and to everyday life despite we try not to see it.

At times the artist uses stencils and spray paint to give that sensation of fading into concreteness, into unreality within a confused and disorienting objectivity that precisely for this reason becomes an emotional cage. She seems to want to suggest that in some way the true colours, the more sensitively fragile ones, must necessarily be protected from the outside, need to move and live enclosed in a safe place where they will never be hurt or lacerated, even if they will never, because of that defensive barrier, have the possibility of escaping and expanding towards an exterior that might even turn out to be more pleasant and satisfying than feared or imagined.

In the more instinctive canvases, those in which Blanka Dovgan opens up and chooses not to have any filters, not to limit her irrational inner exuberance, the artwork becomes a continuation of her interiority of the moment in which she initiates the creative gesture, the palette of colours widens and extends to the entire work, which is executed through the technique of drip painting, Thus, there is no longer any intermediation between figuration and abstraction, between the background and the central part, between detail and the surrounding environment, but rather it is transformed into a narration of everything that in the instant immediately prior to the contact with the canvas had emerged from the depths of the artist’s self.

The tones are brighter and more ardent when the sensations expressed are more passionate, energetic and involving, on the contrary they become lighter, softer, pastel when the sensations are more effervescent, bubbly because they are linked to an experience, or to a present, which induces the artist, like the observer, to let himself be carried away by the brightness of a pleasant and carefree moment. Blanka Dovgan trained as a self-taught artist at a late stage, but this does not make her creative impulse less communicative or involving, and within a few years she was able to participate in numerous group exhibitions in Slovenia and abroad.