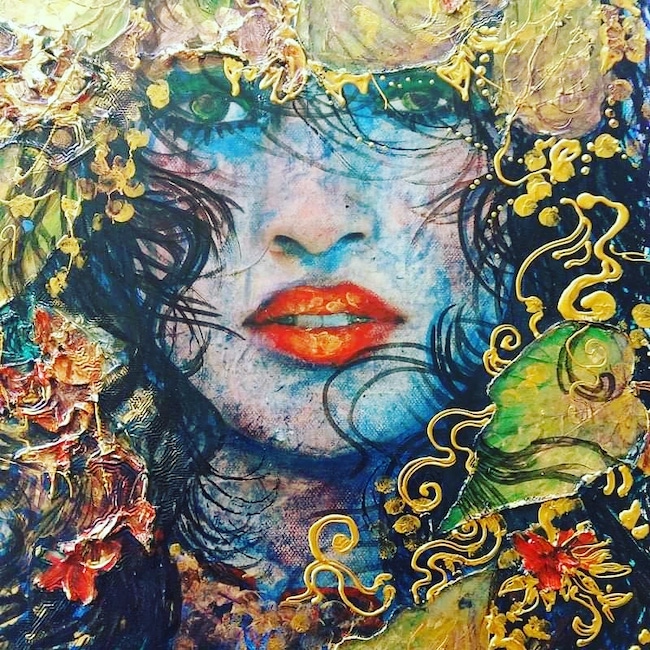 Some artists have an inner need to enrich the reality they observe to make it more akin to their vision of life and things, extending their sunny, positive gaze to give the observer a new way of interpreting emotions and everything that is part of everyday life. Today’s eclectic protagonist chooses this kind of approach to bring to light observed sensations and wrap them in that natural beauty that we often forget to highlight.

Between the end of the nineteenth and the beginning of the twentieth century, an artistic movement, or rather a stylistic trend that took on different connotations depending on the country in which it developed, emerged in various parts of Europe. This movement did not intend to break with academic art, but set out to go beyond the mechanisation generated by industrialisation to hope for a return to nature, to beauty but also to the craftsmanship that escaped mass reproduction. Modernism, Art Nouveau and the Vienna Secession were characterised by a strong aesthetic and decorative taste, also through the use of new materials such as gold leaf, floral and plant motifs, sinuous lines and sumptuous decorations that made the artworks of Alfons Mucha and Gustav Klimt absolutely fascinating and unforgettable. Klimt, in particular, was the founder and promoter of the Vienna Secession, whose main objective was to generate a fusion of the figurative arts to create a style that encompassed not only painting but also architecture, design, the applied arts and handicrafts, in order to maximise expressive beauty and creative ability that could not be reproduced through mechanisation. Gustav Klimt’s Golden Age was a celebration of the guidelines of Secessionism, a tribute to the beauty of the gold of Byzantium, used following a visit to the mosaics of Ravenna, through which he wanted to highlight the sensual harmony of the women he decided to make protagonists. The images depicted were rather flat, two-dimensional, although the expressions were intense and dreamy, incredibly real, highlighted and brought out by the extensive use of gold to emphasise the voluptuousness and preciousness of the moment immortalised, as in the famous Kiss, but also the stately and elegant beauty of Adele Bloch Bauer or the seductive charm of Judith II. The Austrian artist Elisabeth Arocker fully adhered to the guidelines of the Viennese Secession, widening her field of action to various creative manifestations, thus interpreting in fact the intent of all the principles of interaction between the various visual and manufacturing arts that were first theorised by the English Arts and Crafts. Her eclecticism results in a multifaceted production that ranges from paintings, strongly similar to those of Gustav Klimt, albeit enriched with a decidedly more incisive material contribution and including natural elements that interact with the canvas and form an integral part of it, to the production of ceramic objects such as vases or plates, decoration on ceramics enhanced by the use of material applications, and finely painted bags and women’s accessories.

It is a luxurious world the one Elisabeth Arocker narrates, but also a soft one, oriented towards a strong contact with nature that becomes a fundamental part of all her creations and by which the protagonists of her canvases allow themselves to be enveloped so that it may be a means of overcoming the sensations of the moment, those moments of nostalgia, fear, disorientation or simply reflection that the women described by the artist seem to experience.

The royalty of Theodora, the Byzantine queen known for her unhappiness, is emphasised by the subtle details in gold, just as her melancholic expression is amplified by the headdress the artist gives her to alleviate her sadness, as if the wish was to find in the simplicity of the flowers a different key to interpretation, a way to go beyond that phase and open up to the beauty of the small things that usually surround human beings without them being able to absorb their pleasantness. Medea, on the other hand, according to the myth, a cruel sorceress endowed with almost divine powers and capable of unbelievable acts of cruelty, is softened by Arocker through a decoration of golden leaves, almost as if to highlight on the one hand her bewitching charm and on the other the need for a reversal of her nature, a return to more positive, benevolent sentiments, which could completely change the course of her life. Perhaps the artist’s is a metaphor, a symbol of the need to let the good come out rather than the competition and the careerism that characterises contemporary society.

In The lady with the golden helmet, however, Arocker aims to highlight the pure beauty, the elegance in a natural, serene expression of the protagonist, who is caught in a moment of curiosity, in which her attention seems to be captured by a detail outside the work; the artist therefore chooses to emphasise her naturalness through the use of golden glass bead resin which overhangs and surrounds her face. The mixed technique is the basis of all Elisabeth Arocker‘s artistic production. She skilfully mixes photographic images, exotic flowers and plants, acrylic colours, gold leaf and glass pearl resin to make her artworks special and absolutely akin to the decorative intent of the Viennese Secession and Art Nouveau.

As in the work Rose Lady, in which she inserts rose petals that undergo a special treatment by virtue of which they crystallise and enter the canvas, becoming an integral part of it, an enrichment but also an element of the third dimension that seems to amplify the general sense of the entire composition, of the protagonist’s emotion and her need to find contact with herself by virtue of that immersion in the natural element.

The woman is thus a symbol and emblem of that whole universe of sensations and contact with the deepest self that is amplified and manifested more clearly through contact with the natural element, which for the artist corresponds to a return to immediacy and simplicity often set aside to run after the frenetic routine of contemporary existence. Elisabeth Arocker has had many group and solo exhibitions throughout Austria, where she presents and sells not only her paintings, but also her porcelain vases and objects, decorated plates and furniture, and her leather bags, finely decorated with designs that make each item absolutely unique.