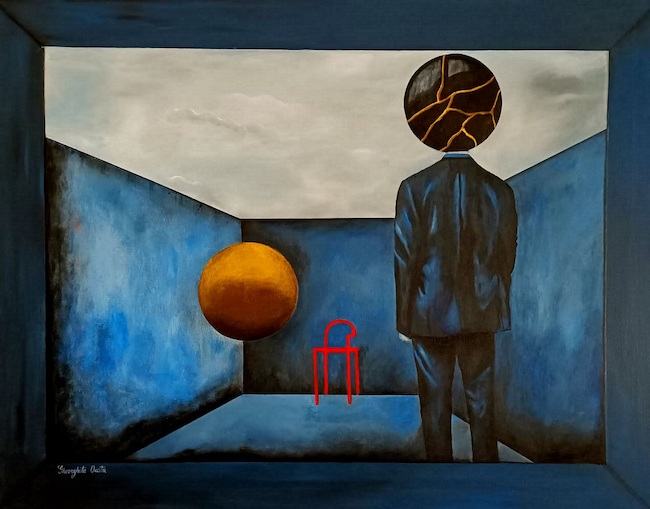 For some artists, escaping into parallel, bizarre and strange universes is the best way to observe reality in a more objective way, leading the authors of the artworks, and consequently also the viewers, to reflect on topics and themes that seem to require a detachment in order to be perceived and understood more profoundly. Today’s protagonist uses mystery, that dimension somewhere between reality and dream, to describe the anxieties of modern life.

Surrealism saw the light around the 1920s, influenced by Dadaist themes but more oriented towards exploring and bringing to light that submerged world that had until then been neglected by art and culture, the world of dreams. It was thanks to the studies and writings of the master of the unconscious, Sigmund Freud, that a large group of artists decided to put psychoanalytic theories on canvas, thus exploring the mysterious and sometimes disturbing part that remained latent in the depths of individuals. In those early days, the imperative was to clear out the dream and the pathways of the psyche, to free the hidden part and detach oneself from conscious rationality, from that world of the mind where there was no room to come into contact with the instinctive, emotional and illogical side that envelops reason as it enters the sleep phase; Surrealist painting was therefore meant to be an automatism, a reminder of the nocturnal journey and an opening up to those anxieties and fears that arise on a non-conscious level but remain veiled, underground. Salvador Dali‘s liquid and deconstructed world, where every object, every element is placed out of its usual place, where every shape is different from the one visible in reality, was a witness to human uncertainties and anxieties in the period just after the First World War, just as René Magritte‘s enigmatic universe led the viewers of his canvases to reflect on the human condition, on the essence of living and on the need to feel as well as to be. Both masters of Surrealism were symbols of how the world of dreams and nightmares was fundamental in bringing out the fears, unease and doubts that characterised man of that time. In the present day, discomforts are different, fears are more interior, more individual, reflections are more inward-looking than outward-looking, and Surrealism becomes a way of bringing to light the contradictions and inconsistencies of today living; this is the approach that distinguishes the Romanian-born but naturalised Italian artist Gheorghita Ouatu, that impulse to let doubts, perplexities and uncertainties emerge, observing them from an apparently distant point of view, creating mysterious worlds and dimensions, and then dropping into meanings that narrate man, his everyday life, his disorientation and inability to take control of and change his existence.

The mystery hidden in the ordinary seems to be the centre of Ouatu‘s pictorial research, the key to understanding a reality in which the individual loses himself, disorientates himself precisely because of the need to find certainties that all too often tend to become a cage, a gilded prison that can only reveal its pitfalls through careful reflection. Pitfalls that the artist reveals, explores from different points of observation, and lets emerge to his conscience but also to that of the observer who feels attracted by the apparently ordinary scenarios that conceal unknowns, awareness of human frailties and weaknesses, and only later is able to rationalise and meditate on the deeper meaning of the images before his eyes.

Gheorghita Ouatu often uses visual metaphors, symbols that represent concepts and that she links to contemporary man, to his sometimes bizarre existence made up of freedom often transformed into an illusion of freedom from all the small, underground rules and norms that remain latent and are perceived unconsciously, despite the fact that they determine and guide daily routine.

In Bla bla bla, Ouatu speaks of man’s addiction to the television media, to the subliminal conditioning that leads people towards manipulated truths that are often far removed from the exact course of events. However, the habit of hearing rather than listening makes the individual lazy and prevents him from opening his mind to let in different voices that would allow him to have a broader point of view and make him freer.

Freedom seems to be the recurring theme of the artist’s canvases, or perhaps the wish to be able to find it, as in the artwork Libertà emozionale (Emotional Freedom), in which the need is interior and pushes the protagonist to break away that shell of certainties, illusions and securities which in reality only constitute limits, barriers to the natural and spontaneous expression of one’s self. The force of the restrained emotions, of the unspoken essence, bursts forth and catapults the woman into a dimension made up of intensity and stronger sensations that are immensely more alive than the sleep in which she had previously been enclosed.

Just as in Frammenti d’anime (Fragments of Souls) the man, who is usually more resistant to letting himself go, abandons himself to his partner, to his woman, allowing her to reach his most fragile point, that heart to be protected and shielded, but which is able to recognise the red thread that binds it to her, a destinic connection in front of which one cannot but capitulate and surrender to a feeling, aware that the other will know how to guard the gift received.

The sphere is the figure that distinguishes Gheorghita Ouatu‘s works, a bivalent symbol of individuality but also of closure to the outside world, as if within it contemporary man could build an imaginary world far removed from reality that induces him to abstract himself but also to lose himself; and yet the cracks that she places in the shell of those spheres seem to want to whisper the need to break the banks and open up to the other, or to a new awareness, or in some cases to spy inside to discover what that circular shell conceals.

The canvas Il risveglio (The Awakening) is emblematic of this invitation by Ouatu to go beyond, not to stop at the surface and to delve into the consequences of a perceptive indifference that prevents the individual from observing, and experiencing, the beauty and harmony that lie hidden beyond a first distracted glance. Throughout her career, Gheorghita Ouatu has participated in numerous national and international group exhibitions, winning important prizes and awards; her artworks are exhibited in public and private structures and visible in various art magazines.