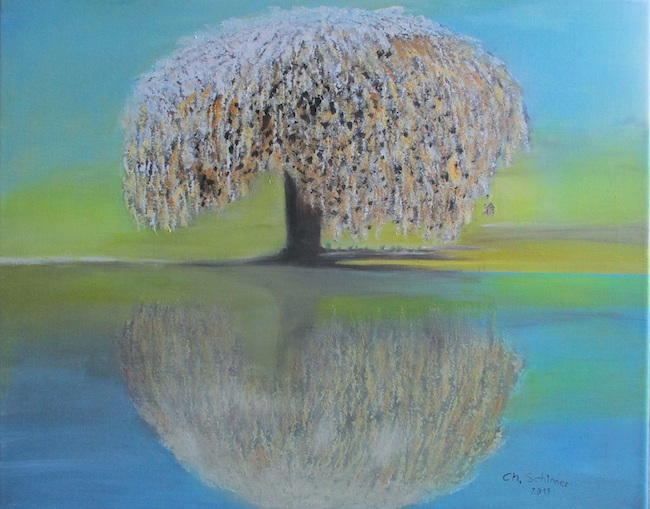 In contemporary era many artists tend to manifest, and bring to light, the anxieties, the doubts that characterise their own interiority as well as the complexities of a modern society that has often lost points of reference and the ability to internalise and reflect on itself and on occurences; following this expressive line their works are impetuous, strong, incisive, or gloomy, tumultuous, aimed at unraveling the mystery, at conciously seeking an essence that tries not to emerge. For today’s protagonist, instead, painting means a path of meditation, satisfying the need to get in touch with herself, with her deepest self, through the contemplation of nature.

Romanticism was the artistic movement that, in the early nineteenth century, introduced the landscape as the predominant subject, linked to the moods of the artists who represented it and who wanted to underline the power and greatness of nature in front of which the human being could feel terrified or, on the contrary, reassured. The most intense and incisive landscape expressiveness of the artistic movement which, by virtue of that search for emotion and interiorisation, anticipated modern art, was that of the English artists William Turner and John Constable, both capable of arousing overwhelming emotions in the observer. The first one with his images of stormy seas, tempestous skies, which underlined man’s inconsistency if facing with the impetuous force of the surrounding environment, the second one with views of the soul, those places in the English countryside that belonged to the emotional treasure chest of his memory and where his nostalgic gaze could only continue to get lost. Later, with Impressionism and the Macchiaioli, the landscape found a new dimension, more aesthetic, less oriented to express inner feelings and motions and more inclined to seek the perfect balance between reality and reproduction, where the fulcrum of the research was the light on the places depicted so that the beauty that the eye saw would be impressed on the canvas without interference of an emotion that would pollute its aesthetic purity. However, the result often went beyond the artist’s own intention, as can be seen in the engaging works by Pierre-Auguste Renoir and Claude Monet; the rarefied places, full of light but also of atmosphere, actually express the feeling of the two impressionist masters, feeling that it comes out of the work and inevitably comes to make the emotional chords of the observer vibrate.

The Austrian artist Christine Schinner, who came to artistic expression after a completely different life path, prefers the landscape to narrate intimate, personal emotions and sensations, full of moods that do not need to come out loud, quite the opposite, her pictorial approach is slow, meditated, evocative precisely because of the reflective calm that instills in those who watch her artworks.

Every place, every glimpse or natural event described by Schinner seems to be shrouded in silence, in that calm belonging to those who are able to observe reality, and the events of life, with serenity and enraptured contemplation, almost as if what the gaze captures was a cue for inner reflection, as if feeling matched the image to be able to go deeper into the intimate universe that needs the external protection of the world of nature to be able to manifest itself and reach awareness. The colours tend more towards Expressionism than Realism, despite the fact that the style of painting is instead faithful to the observed reality, but those intense and vivid tones are much more in tune with the artist’s emotionality than with what they should naturally have, thus widening Schinner‘s fundamental connection between external and internal equilibrium.

In the canvas Am Flusslauf (At the River) it is evident the tendency to let oneself be carried away by the slow flow of the water that is linked to the concept of the pantha rei eracliteo, that need to let everything go beyond the contingent moment and go further to leave space to the new that must arrive; and it is precisely through that flow that Christine Schinner finds her own introspective dimension by narrating the river enveloped by a silent aura, as if the noise of its slow waters were only a subtle and distant echo barely perceived by the conscious mind.

In Entwurzelt (Uprooted), the sensation perceived by the observer is an empathic participation towards the tree which is a metaphor for contemporary man, whose roots are often uprooted in the name of progress and progressiveness which tends, on the other hand, to cause the loss of certainties and traditions that are indispensable to instill a sense of belonging, of security that only what is acquired over time can generate. Or, from another point of view, those roots extracted but still tied to the trunk, in spite of everything, are sometimes all that remains when the need to take a different path from the one foreseen or hypothesized, leads the individual to faraway places to realize himself and make his future concrete.

Even in the canvases Lebensfreude (Joy of Living) and Lebensfreude 2 (Joy of Living 2), although the tones are sunny, lively, warm and cheerful precisely to underline a feeling of well-being and satisfaction, Christine Schinner never raises her voice, never departs from her calm attention to intense states of mind, ideally enclosed in precious transparent spheres, but at the same time lived in serenity and balance, a dimension that can only be reached through a deep knowledge of one’s own emotional depths.

The artwork Utopia, the image in cover of this article, is emblematic of the essence of the artist, in which substance is reflected in appearance and vice versa, like two sides of the same coin that only when they are in perfect harmony can infuse a magical sense of peace and give the opportunity to dream of an ideal place to strive for, that utopia evoked by the title. From the moment she finished her academic studies with the art teacher Roswitha Eisenbok, Christine Schinner‘s artistic career began to play an increasingly important part in her life; from 2006 to the present day she has exhibited in many group exhibitions in Austria in Vienna, Graz, Stokerau, Korneuburg, Germany in Bremen, and recently also in Italy, gaining recognition and appreciation from the public and art lovers. In November she will exhibit in Switzerland.