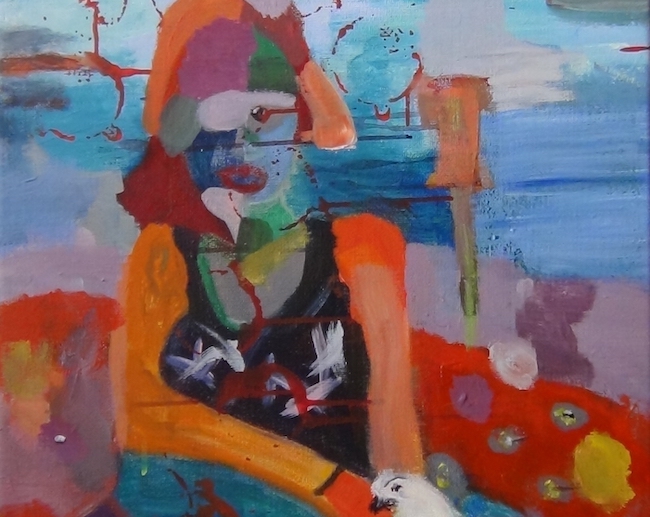 Artistic sensitivity cannot ignore the observation of the surrounding reality as well as that which belongs to one’s own experience, to one’s own interiority, in order to better understand contemporaneity but also the different approaches that are implemented from one individual to another; recounting the result of that careful analysis, with all the emotional nuances that are aroused and internalised during the creative gesture, is a substantial characteristic of today’s protagonist.

The beginning of the twentieth century saw the consolidation of a pictorial movement, the foundations of which had already been outlined at the end of the nineteenth century, which soon took its rightful place among the avant-garde movements that so characterised the first fifty years of the most revolutionary and transformative century in the history of art, and which brought about the urge to focus on subjectivity rather than objectivity, on feeling rather than adhering to an aesthetic form that was too divergent from the deepest feelings. Expressionism, the name of the new painting movement, took on different characteristics depending on the European country in which it developed. In Germany and Northern Europe, disorientation, anguish and a sense of desperation prevailed, as in the desolate artworks of Edvard Munch, which conveyed to the viewer the discomfort of living in his time, or the grotesque representation of the bourgeoisie in the paintings of James Ensor, in France, on the other hand, prevailed the impetuousness of the sensations, which were the absolute filter with which the artists belonging to the current observed everything that surrounded them. The influence of the Fauvism paved the way for French Expressionism, which stood out for its less gloomy atmospheres and was more oriented towards embracing and welcoming the entire emotional range that was part of living, and therefore representing reality according to the individual point of view, of the individual sensation, was the way to observe everything through a kaleidoscope of colours that could not help but align themselves with feeling. The tones were brighter, stronger of course, and even unreal, but they were not intended to convey unease or disorientation, but rather to express a point of view, an emotional lens through which the artist observed, or dreamt of, objective reality. André Derain, Henri Matisse and Maurice de Vlaminck overturned the rules of colour, perspective and chiaroscuro, creating artworks with a strong emotional impact, surreal in their detachment from reality and yet able to involve the observer precisely because of their simple and direct, almost childlike language. Austrian artist Susanne Zeiner absorbs the chromatic range of French Expressionism and the Fauves but uses it to narrate the multiple circumstances of contemporary life, that continuous passage between exteriority and interiority, between showing and hiding, which belongs to the human being of the 21st century.

Zeiner observes life through the lens of a kaleidoscope, and of each emotion, each sensation, she immortalises the salient moment, the most significant one for her perception or for the protagonist of the canvas, allowing the expressionist figuration to be veiled by a tendency towards abstraction, as if to suggest that what she is recounting, what she is narrating, could belong to anyone, bringing closer to Pirandello‘s theory of One, No One and a Hundred Thousand, because after all, what is observed in someone outside belongs to an emotional world that touches all, despite resistance and filters.

The observer feels involved in Susanne Zeiner‘s world precisely because she recognises moments she has experienced, situations common to her own daily life and therefore familiar, known to the eye as well as to her inner self. Her interpretation, her chromatic agreements with those emotions reveal her predisposition towards openness and also her awareness that each event, each circumstance, is a necessary path to personal evolution and growth and therefore needs to be welcomed and accepted in its entirety, considering it simply as a transitory phase towards a new becoming.

The canvas Hinfallen und wieder aufstehen (Falling down and then getting up again) symbolises precisely Zeiner‘s exhortation to take note of the ups and downs to which life subjects the individual who needs to strengthen himself, to take charge of the situation and find the strenght to reborn, fall after fall; the colours partly express the pain, the sense of defeat during the collapse, such as the red and forest green of the lower part of the painting, but then take on more reassuring tones, such as the white and blue belonging to the instant immediately after the decision to raise one’s head and tend towards a new path.

As in the artworks In chains and On chains, two distinct yet contiguous canvases in which the artist describes the feeling of inability to free oneself from the cage of conventions, representing the before and after, the dark phase of remaining within certainties that do not make one happy, followed by the other in which the protagonists choose to break through the barriers that trap them, to break the pattern into which they often involuntarily take refuge, and to free themselves, giving themselves the opportunity to walk over the chains that had kept them grounded, immobile. In this series of works, figuration tends to hide itself, to remain barely hinted at, perhaps because for the artist the phase of consciousness, of awareness of her own condition or of the sensations that must emerge, needs to be internalised, completely detached from the exterior and from form, which have nothing to do with emotions.

In the painting Dating, expressionist figuration returns to the forefront, because Zeiner needs to move outwards from her point of observation in order to recount a moment in the life of a couple captured during the instant of encounter, or perhaps during the moment of detachment, if we take the dark tear that seems to fall from the woman’s eye as a reference and central point; it is in that fragment of doubt that the artist’s attention is focused, in that moment in which everything is possible, the options are manifold and yet the protagonists seem to remain hooked, suspended, within that juncture, as if neither of them wanted to move on to the next instant. Susanne Zeiner‘s artistic career began in 2014 and since then she has participated in many group and solo exhibitions in Austria, Germany, France and Italy, meeting with the appreciation of the public and experts.