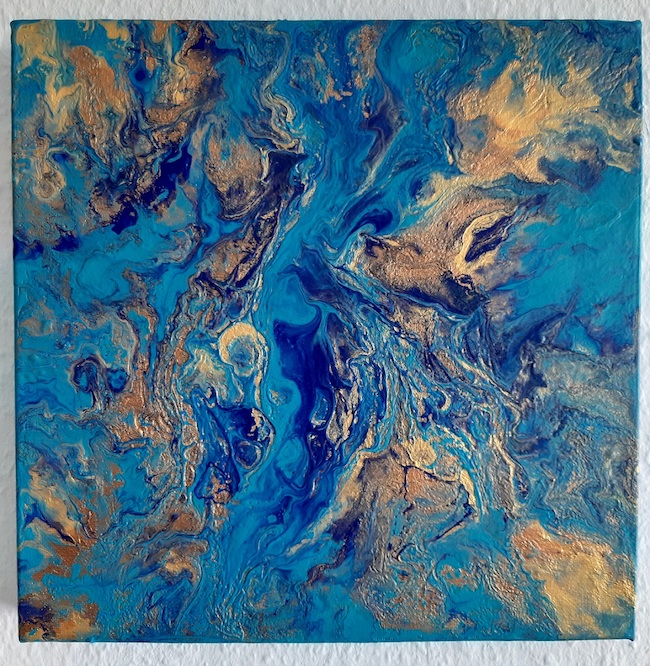 The many languages of contemporary art reveal and unveil the personal gaze of each author of ana artwork, his way of dealing with inner or outer reality, and of freeing himself from the sensations that envelop him on the basis of his own feelings and expressive needs. Within this variegated creative world, some artists choose to narrate positive, cheerful emotions, while others need to delve deep into their innermost selves and question everything that often fails to surface. The artist I am going to talk about today belongs to the more introspective, to those who are more oriented towards looking at, facing and metabolising those strong feelings that belong to the inner world of every human being.

Since its debut in the history of twentieth-century art, Abstract Expressionism had emerged as a movement in opposition to the rigour of Geometric Abstraction, which, however, had the strength to clearly break the boundaries with all that artistic production that needed to depict, or give its own interpretation of, reality in order to express the feelings and moods of the artists. When industrialisation and the spread of the new image reproduction devices, the cameras, became more and more established, a large group of northern European artists felt the need to create an art form, a mode of expression inaccessible to mechanics and did not need to adhere to known reality in order to create an artwork. However, that rigorous, scientific Geometric Abstraction was cold, impersonal, lacking the ability to reach the emotional strings precisely because it concentrated on pure and simple plasticity, on the exaltation of the creative act stripped of any impression or feeling of the author of the artwork. Vassily Kandinsky was the first to understand the need for abstractionists to be able to give emotions, which had always been the main purpose of art, recovering in his Lyrical Abstractionism the ability to narrate and manifest feelings that had to dance together with the undefined figures protagonists of his paintings. Jackson Pollock took up the intuition of the great Russian master, emphasising however the need for everything to be emotion, not restrained, overwhelming or soft in its flow, but always the focal point of the beginning and end of each artwork; the movement he conceived took the name of Abstract Expressionism and initially found fertile ground in the United States, where it originated, before spreading and finding great masters in Europe as well, precisely because of that communicative strenght capable of overwhelming the observer. The artist Rabia Kadmiri, of Moroccan origin but now a naturalised German, chooses the movement of which Pollock was the founder to narrate her own inner movements, those wounds, those scars that events, the past, circumstances or simply the world she observes have left on her profound sensitivity.

It is as if her feelings needed to let out those sensations that would otherwise remain latent, hidden, disturbing her thoughts, her daily life, because more often than one can imagine it is exactly what rationality refuses to face, or admit, that creates the most resistant blocks, those that in the long run prevent the individual from metabolising the events to begin the path of rebirth.

The shades chosen by Kadmiri are essentially cold, like the whites and blues that seem to predominate in many of her canvases, yet they are always accompanied by more vibrant, livelier hues, based on the feeling she wishes to describe and communicate to the viewer.

Her path is introspective, aimed at asking herself the reason for the events but also how much they have left a furrow in her soul, sensitive and fragile like that of artists, but also strong and in need of finding a hook, a way out towards rebirth precisely by virtue of the awareness and consciousness of the scars that any event, any circumstance of the path taken, leaves a functional cue to find the strength to get up again, to get back on her feet perhaps even stronger than before.

The work Tanz der Wunden (Dance of the Wounds) represents exactly Rabia Kadmiri‘s attitude of evaluating and observing the alternation of the most pleasant moments with the most painful ones, those moments capable of giving joy but immediately afterwards tracing a furrow; however, the artist seems to suggest that joy often has as its counterpart a subsequent cost that can leave one disorientated, saddened, on the ground, but that one would probably return to live and experience even knowing its epilogue, because the existence of that wound cannot precluded the desire to let go of the beauty that experiences always leave behind.

In Springflut (Spring Tide), the tones chosen belong to the range of cold colours, yet the sensation that emerges from the artwork is of soft envelopment, of serenity of the gaze as it rests on those waves, those gentle splashes of water that seem to want to attract by virtue of their regenerative capacity, their moderate vivacity different from the whirlwind of the swell and therefore more reassuring.

In Land der Herausforderung (Land of the Challenge), Kadmiri returns to the most impetuous red, associating it with green, blue and yellow ochre, mixing them, letting them interpenetrate and clash to give the sensation of a union that often becomes a conflict, between different colours, opposing forces, a metaphor for the world we live in, where every territory, every border seems to have to be a box closed to the outside, where to enter it is necessary to impose oneself in order to be heard, where diversity is seen as something to defend against. This is the challenge mentioned in the title, that antagonism which exists only by virtue of a fear of opening up to the other which could instead simply be listening, where opposing forces need not necessarily come into conflict but simply harmonise and draw on each other.

A symbol of this hope seems to be the canvas, in which emerges the sensation of calm, of peace, perhaps achieved solely and exclusively by drawing on the essentiality and spontaneity of nature, which teaches human beings to welcome and absorb as part of themselves even elements that do not belong to them, to listen to silence and through it meditate on an interiority that instinctively would not know divisions and distances that instead emerge through the pollution of generalisation and the rational mind that often tends to separate and distance what it does not know. Rabia Kadmiri has exhibited her artworks in many international group exhibitions in Germany, Italy and Egypt, and in 2020 she was awarded three important art prizes and accreditations.