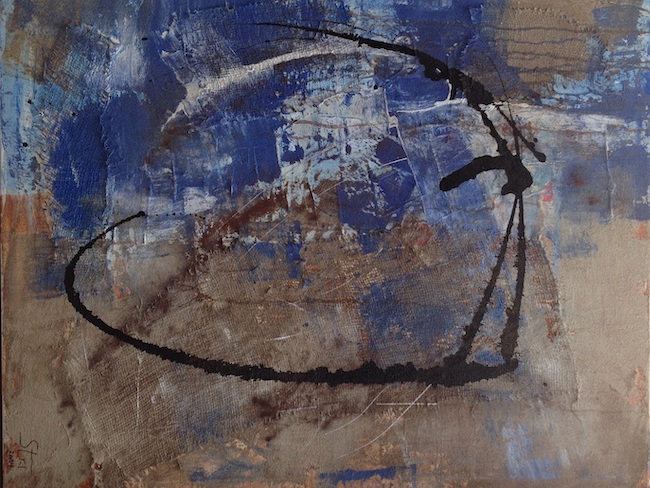 There are artists who are born as such and assume the awareness of their creative nature right from the start, even though they carry out in their evolution a route of discovery of the style more akin to their own creative nature, and there are others to whom the impulse to manifest their interiority through images is revealed late, following different paths that were however necessary to store emotions and sensations then released on the canvas. Today’s protagonist is among those artists, those for whom the approach with the canvas represents a liberation of everything that until just before had remained in the depths of the most intimate world.

The pictorial movement of Abstract Expressionism is perfectly in tune with the expressive urgency of that emotional, interior world, which often in the history of art preceding the twentieth century had been put in the background compared with the external form, to the search for adherence to the observed reality and the need to adhere to those academic rules essential to the pictorial approach. Already in the early years of the twentieth century, first the Fauves and then the expressionists had determined a detachment from the most traditional schemes by upsetting the rules of drawing, perspective and affirming the right not to conform to aesthetics, to beauty, if not in accordance with the inner movements, the deepest and irrepressible ones that therefore could not obey formal rules to manifest themselves. The affirmation of the most complete liberation from externality, from contact with what the eye is accustomed to recognize, came later, when Abstract Expressionism claimed its right to be recognized as an art form on the occasion of the exclusion of the group by the Metropolitan Museum of Art in New York, which was preparing to organize a major exhibition on contemporary art in 1950; the indignation of the abstract expressionists, from which the nickname The Outraged, reached the pages of the main newspapers of the time, earning them the right to make known to the general public an innovative pictorial manifesto letting them enter, from that moment, the main cultural and artistic circuits of the time. The spontaneity and immediacy were the means by which the paintings of Jackson Pollock, Franz Kline, Willem de Kooning, Clyfford Still, just to name a few, reached the users in an instinctive way, almost primordial, dragging them into an emotional vortex from which they felt attracted only for the intensity of expression and the ability to vibrate their inner chords. The Austrian artist Brigitta Stritezsky approaches art exactly through that urge to release emotions held back during her life, the one in which she had not yet become aware of an artistic inclination that probably needed to grow and mature before manifesting itself; the style most akin to that irrepressible impulse was Abstract Expressionism for the freedom and individualism defended and pursued by its founders in the 1950s, and which continues to fascinate for its independence from any kind of rule and for the pictorial immediacy that distinguishes it. Stritezsky‘s inner world is tumultuous in some artworks, overwhelming precisely because of that long time during which what has been experienced, perceived, absorbed during the previous path, had become entangled within her inner world, manifesting itself in the form of passion, anger, desire to break those chains that had kept it immobile.

The artworks belonging to that first phase of her approach to the canvas are in fact characterized by red colors, declined in various shades, and by an expressive impetuosity that can not fail to reach the viewer involving him with explosive images, vehement, but which tell of primordial emotions, belonging to the nature of human beings.

Such as the sentimental passion masterfully represented by the artwork Love Intoxication, that seems to be a multifaceted look at the various forms of love, understood in the broadest sense of the term, and at the same time a warning not to be overwhelmed or, on the contrary, an invitation to do so because, after all, the feeling is able to elevate the existence of each one and make everything, every moment, immensely more interesting.

In-Action also represents an exhortation not to remain immobile, inactive, because it is only by virtue of a single action that effects and causes begin to concatenate, capable of opening up new and unthinkable paths; often it is precisely the inability to take charge of one’s own life, remaining caged within lazy certainties that prevent the individual from evolving, that determines a latent unhappiness, an unconscious apathy that, in the long run, not only wears out but also atrophies the same emotions.

After a first impetuous impact, Brigitta Stritezsky finds a calmer expressive dimension, more reflective, less rushing perhaps because she learns to live with the feelings that press to be free without being overwhelmed and so the tones of her artworks appear more spiritual, more sublime, as if her interiority had reached a higher dimension, more elevated and relaxed, and she also discovers the material, the slowness of inserting concrete, tangible elements, which enter the canvas and become an integral part of it with their thickness that exceeds the two-dimensionality.

The colors are predominantly azures, blues, which have the power to give the viewer a sense of calm, contemplation also by virtue of the themes addressed by this new series, those of the environment, as in the canvas Im Eis (In the ice) of the mystery never revealed of the universe, Aus das Universum, in das Universum (from the Universe, in the Universe), therefore, reflections that are more globally existential, less intimate, less inwardly focused, but more open to the outside, to a connection with the world that we inhabit and that accompanies all of our lives. The pictorial trait is less rushing, more calm, but always manifesting and telling the need to dive into hers own sensations, to take note of them and welcome them as part of herself, with all their urgency, impellence, bursting forth which, however, no longer destabilizes as in the previous phase but generates that fundamental connection between soul and mind, between instinct and reason, between feeling and observing.

Here then that in Hoffnung (Hope), Stritezsky‘s approach is one of quiet openness in being able to grasp that light, represented by the yellow foreshortening on a gray scale background, capable of completely modifying the point of view, of constituting that hook of exit from a situation that seems closed but that is precisely in virtue of the trust that everything can change that induces the subtle energies to transform and make that change happen. In the course of her artistic career that began in 2016, Brigitta Stritezsky has participated in numerous group exhibitions in Austria but also abroad, including recently in Italy, meeting with the appreciation of the public and insiders.