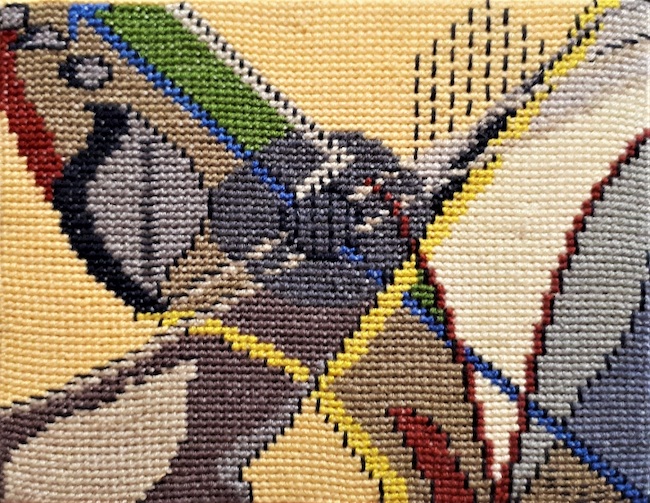 The new frontier in contemporary art is undoubtedly that of synergy between habitually separate and carefully distinguished disciplines, some of which are not even considered artistic forms but which, in recent years, have taken hold and merged with more traditional modes of expression. The artist I am going to tell you about today has literally found a meeting point between one of the oldest manufacturing techniques to which women have always dedicated themselves, and one of the most important artistic currents of the twentieth century.

The art of embroidery has remote roots and has adorned the dresses and headdresses of pharaohs, Chinese emperors, leaders of the Ottoman kingdom and then, over the centuries, has maintained its strong relevance to enrich and decorate the dresses of kings and queens, untile the point to embellishing everyday objects too; however, although the women and men who had a particular skill in this manufacture were in great demand from the upper classes, embroidery was never equated with what were considered the primary arts, namely painting and sculpture. Valentina Ohurtsova, of Russian origin but resident for some years in Venice, chose to combine her two artistic talents to generate a new expressive form precisely because of hers mixing styles and techniques seemingly unconjugable but in reality perfectly in harmony with each other.

Her approach, however, contrary to what we are used to see from embroidery, is linked to Abstractionism, that fundamental movement of twentieth century through which painting and art have decreed the detachment from the real form and image to leave space to pure form, often geometric, which had the task of exalting and emphasizing the importance of the creative act compared to other forms of reproduction of reality that were becoming established in the last century. In particular, Russia was the country where were born two of the greatest masters who adopted the abstract form to characterize their canvases: Wassily Kandinsky, father of Lyrical Abstraction, and Kazimir Malevič, founder and main exponent of Russian Suprematism. One convinced that the form and association of colours were sufficient to communicate emotions to the observer without the need to resort to figuration, which had dominated previous centuries, the other heated supporter of the supremacy of plasticity and geometry over external appearances that distract from the purity of sensitivity that only vibrates in the face of non-figuration. Softer and more sinuous in Kandinsky shapes and shades, more rigorous and geometric and essentially linked to the primary colours in Malevič. Valentia Ohurstova‘s art contains elements of both masters of Abstraction, while personalizing them with a style in which colors seem to be attenuated, more powdered perhaps to emphasize her tendency towards reflection, the internalization of sensations received from the observed reality, from that outside of oneself that inevitably becomes part, even for an instant, of the emotional sphere of the artist who then needs to express those fragments of thoughts and immortalize them on canvas.

Or better to say on the sketch because the canvas is the one in which to build point after point the second part of the work, the more material one if you like, the one in which the yarn enters in connection with creativity and is transformed into an ideal brush executor in the skilled hands of Ohurstova.

Her emotional sensitivity leads her to wonder and try to explore fundamental themes of contemporary existence, as in the work Maschera (Mask), in which she underlines the common tendency to hide one’s true essence behind layers, veils, by virtue of which modern man changes, chameleonically, according to the moment and the individuals with whom he interacts, almost to the point of forgetting who he really is. This is the reason for the many stylized faces that the artist inserts in the work, those different expressions, sometimes smiling and sometimes sad, that represent the one, the none and the one hundred thousand of Pirandellian memory, that we cross daily in the flow of life.

Or again in Rivincita, la forza interiore (Payback, the inner strength) tells of straight lines and round shapes with which we identify the obstacles that in the course of existence inevitably have to be faced and overcome, followed by the most serene moments, those of becoming aware of one’s own strength and the ability to rise up to move forward.

In the work Semplicità, vitalità (Simplicity, vitality), Ohurtsova seems to want to focus attention on the importance of balance through delicate, dusty but reassuring tones, precisely because of that oscillation in moderation, without being excessive but not too much undertone, on which we build emotional certainties and love for the simplest and most natural things that are then all we need to feel good, to achieve that happiness that otherwise tends to escape.

She skillfully alternates geometrically more rigid forms with softer ones, constantly poised between listening to reason and reflection or letting go to emotions. This is Valentina Ohurtsova‘s world, a universe made up of speed but also slowness, of a design executed from the belly, listening to the feeling she wants to tell, and the following realization through embroidery, more rhythmic and necessarily executed with a more moderate time. Valentina Ohurtsova has participated in numerous exhibitions in Rome and Venice where she has been noticed by the public but also by many art experts for the singularity of her technique and artistic style.