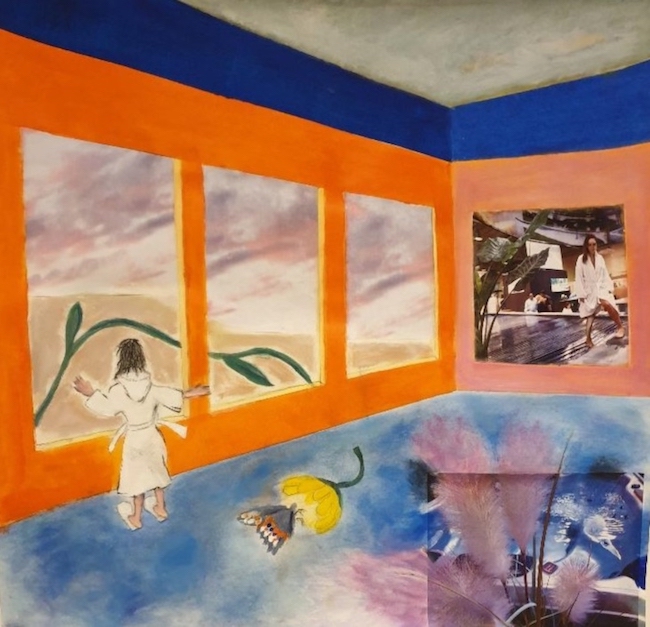 The contemporary art scene is strongly oriented towards expressive individualism and the freedom of each creative artist to mix pictorial styles in order to create a personal language, without feeling the need, which was strongly present in the last century, to identify within a pictorial current. However, there are still creative artists who feel the need to define their own pictorial approach with guidelines that others who share the same outlook on art or find themselves in, can adhere to. Today’s protagonist is one of these innovators.

The first half of the twentieth century was strongly marked by the birth of many artistic movements that were fundamental in bringing together those revolutionaries who felt the need to break with the rigid rules of the past, to break out of schemes that were no longer able to represent the era of the moment, that period of revolutions and wars within which the representation of beauty, of the aesthetically perfect, and of form as classically understood were no longer akin to and in conformity with a society in rapid and continuous evolution. Therefore, artists needed to assert a different point of view on how to manifest their creativity on the basis of the guidelines of the current that best suited their character, their thinking, their vision of the direction art should take to keep up with the times. Futurism, Expressionism, Cubism, Geometric Abstractionism and Surrealism were the cradle of the greatest masters of the 20th century, but also the starting point for the subsequent evolutions they generated. In all cases, belonging to the different groups was a way of making the pictorial intention, the philosophical approach and the concepts behind the images more incisively felt, thus revealing the talent of the individual members. It was by virtue of this collective strength, the desire to define and leave a written record of the stylistic rules, the orientation and meaning of what the artists wanted to express, as well as the communicative talent of the greats of painting such as Umberto Boccioni, Edvard Munch, Pablo Picasso, Piet Mondrian and Salvador Dalì, to name a few, that all the movements of the first half of the last century crossed time and laid the foundations for all the evolutions and modifications that took shape in subsequent years. Andrea Marco Ghia, an emerging artist of Italian origin but who has been living in Luxembourg for many years, absorbs from the past the desire to reconstitute that choral voice of different artists to give life to an unprecedented approach to the canvas, imposing himself with originality compared to contemporary times to lay the foundations for a new pictorial current, Photo Dreams Painting, which outlines an unprecedented way of working on the canvas by mixing different techniques and styles yet perfectly harmonious.

Ghia‘s artworks are fragments of dreams, completely irrational instants in which figuration is functional to represent that bizarre fusion between what the eye is used to see in reality and the transformation carried out by the unconscious, the re-elaboration of images that mix and mingle to give life to scenarios that are as improbable as they are vaguely possible.

The painting Lobsters from the Sky describes a paradoxical world in which the protagonist, wearing a swimming costume and flippers although she is out of the water, uses an umbrella to protect herself from a shower of lobsters flowing into the stream below; the technique is mixed because the stream is a real photograph inserted into the work as a collage, becoming an integral part of it through the artist’s pictorial action which tends to conceal its nature. The colours are of expressionist matrix, as it is the descriptive simplicity of the elements present, but the link with the dream and the misplaced draws instead from the surrealist philosophy of the revelation of the unconscious, of the dream world.

In Fiore come paracadute (Flower as a parachute), Andrea Marco Ghia seems to hope for a world in which nature is respected because it can be a salvation, a lifeboat against the pressure of progress that leads to an unsustainable existence precisely because of the lack of respect for the world that welcomes the human being; here, too, the approach to the theme is ironic, dreamy, oneiric in its simplicity, as if letting the unconscious escape would attenuate the meaning that transpires from the artwork itself.

In the canvas Look this light from the firefly, the real element, the image of a group of people looking at the transparent floor, becomes the point of observation of the underlying fantasy, the dream of a boatman accompanied by the luminosity of a firefly placed outside its natural context, as if this small insect became a beacon in the night for man, a guide in the sea of circumstances that he will have to face.

And finally, in Partita reale (Real Game) the artist seems to highlight the metaphor of life, that of having to become players or pawns, that choice between action and passivity, between being protagonists or extras in an existence that moves rapidly forward and which, piece by piece, can be built and led in the direction chosen or immovably trapped in the situation from which it is decided not to leave; the real part is a place full of plants, vital, vivid, towards which to strive, the dream is instead that of being able to take things in hand and push them towards the desired direction.

Photo Dreams Painting is therefore an amusing and fairytale-like union between dream and reality, between what the unconscious interprets and what the eye sees in its rational phase, a style that distinguishes the artworks of Andrea Marco Ghia who does not stop at the creation of a single current but rather co-founds with his colleagure Jwan Atto current of Spiritual Errorism, a constant search for the meeting point between order and chaos, among conceptual error and the mind’s need to find a logical balance in the confusion that results from incoherence. Even the technique of execution is a perpetual search for balance between the two opposing forces, that instinctively imprinting abstract sensations that are then modified and rearranged to give them meaning, through the use of retouching. Coincidences and mistakes can emerge by virtue of an expressive simplicity that is functional to the free flow of emotions, of sensations, without any logical control, leaving free space for disorder that is then, at a later stage, balanced towards a new order.

Andrea Marco Ghia studied at the Academy of Fine Arts in Arlon, Belgium, and chose photography as educational address, he devoted for many years to artistic photography until he decided to approach painting in a new way, mixing his previous experience with a new creative impulse to give life to a new language. During his recent artistic career, he has participated in numerous exhibitions throughout Europe and will be present at the Istanbul IAAF Art Fair in May 2021.