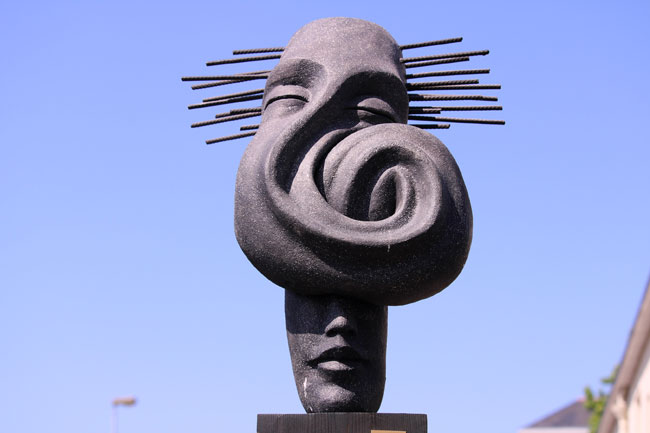 Sculpture is an artistic discipline that requires great skill in forging a solid material, transforming it into something plastic, in a completely different form from the natural and original one, thus creating a creative act of an almost primordial type because everything is created from nothing. Today’s protagonist is a great exponent of contemporary worldwide sculpture.

Eido Alhussein, Syrian by origin but since 2016 resident in Angers, France, soon stands out in the international art scene for the absolute originality of his works with a strong cubist imprint. Especially in the first phase of research, Cubism in sculpture is strongly linked to the previous Primitivism, we are around the first decade of the Twentieth century, when artists such as Paco Durio, Pablo Picasso, Erich Eckel, fascinated by African and Asian masks chosed the simplification of lines and details that were then the starting point of the Cubist sculpture; Modigliani himself, in his sculptural phase, created faces strongly inspired by Egypt and African culture, personalizing them through what was then his unmistakable style that has consecrated him to world fame. The upheaval of the classicism of the lines and the modification of the image to move it away from reality through the simplicity of the lineaments subsequently decomposed and recomposed to create a new representation of reality, were the main characteristics of the movement of which Pablo Picasso was the founder and greatest representative together with George Braques and Fernand Legère.

Eido Alhussein gives life to his personal language, a meeting point between the simple and basic lines of Primitivism and the transformation of the visible reality typical of Cubism; his sculptural style is identifiable and intense, has a distinctive trait that manages to conquer at first glance, induces to go beyond plasticity to let flow even the meaning that comes out of his sculptures.

The faces are distorted, deformed, stretched, modified, almost as if a heat source had liquefied them and left there to solidify again in the form by then different from the original one; the looks are intense, sad and often suffering probably memory and empathy with his people who had, and still has before them, the pain of war, the disintegration of emotional ties, the destruction of everything that had characterized life before the civil conflict.

That of Alhussein is an existential reflection, it suggests that the form is not functional to the essence because in fact it survives, the interior is predominant on the exterior that can lose its cornerstones, can change with time and events, but will never be able, with its mutations, to erase the inner scars, the memory, the strength of a remembrance or the impetus of a feeling that remains inside sometimes forever. The destructuring of the morphology of his faces, to which he prefers never to give titles, almost as if to underline the importance of feeling part of a whole, the human race, which sometimes has the ability to unite but many others to fight, underestimating the importance of life itself, is able to give an unusual intensity to the materials used and create an immediate connection with the deepest inner cords.

The glances of Alhussein‘s works wander around the visual field, sometimes they are directed towards the observer, other times they are on the side, because the artist chooses to indicate the path of multi-laterality, telling the viewer that there is not a single point of view, that things can be looked at with the mind or with the soul, and then everything can appear different from how it is, and still that it is necessary to question everything to avoid believing something for which few would like to lead the common opinion. The impact of Eido Alhussein‘s sculptures is strong, magnetic, captivating because he manages to touch the rational keys as much as the emotional ones, the charm of his works lies in attracting with the forms of almost liquid or ephemeral appearance, and then catalyze the attention to the silent cry that comes out of those faces, fear, resignation, pain, the awareness of having to rebuild, day after day, a new identity that changes with the passage of time and circumstances.

From a stylistic point of view, is evident Alhussein‘s skill in forging and shaping the materials he uses, from marble to granite, from quartz to iron, but also to glass and wood, to subject them to a creative hand capable of giving them a new essence, an unusual plasticity that changes their substance, structure and communicative capacity. During his long artistic career – which began in 1996 – Eido Alhussein has participated in many group exhibitions in Syria, in Turch and then, after his move to Europe in 2016, he was the guest of honour at international exhibitions in France, Austria and Italy; he has also held important solo exhibitions in Syria and France.