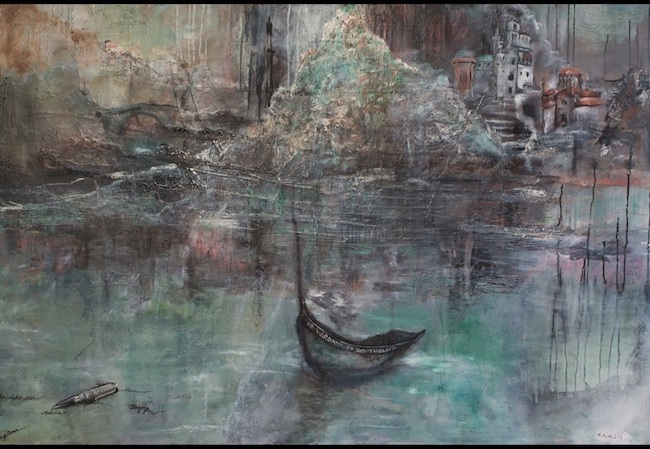 Telling one’s own interiority, perplexities, fears of everyday life is the expressive choice of that group of artists with a marked sensitivity that cannot, and does not want to, be hidden behind a more calm, thoughtful and meditated form, but rather needs to tell out loud the thoughts and memories that crowd the mind of the performer of the work. The artist I am going to tell you about today has chosen this communication channel to make his emotions speak.

The watchword in the history of Twentieth century art was freedom, although very often the movements set rules even if the artists who adhered to them were convinced that they did not have at all; many were the pictorial currents that had their roots in that previous transformation that came in the last years of the Nineteenth century and that was the beginning of a change so epochal after which the patterns and the pictorial rules were no longer the same. In particular, Expressionism set itself as an antagonist of the guidelines of the coeval Impressionism, especially in the way of intending the pictorial gesture that had no longer to be the embellished representation of a daily life made of good living, idyllic situations and moments of fun and entertainment. No, the artists adhering to Expressionism wanted to go deeper, they felt the need to shout out inner discomforts and fears that enveloped man’s existence, then as now, and they chose to do so without worrying that the final result might not appear aesthetically pleasing, disturbing and sometimes frightening, using unreal, strong, intense, dark, impetuous colors, following the track born in France with Fauvism and then evolved embracing, litterally, every European country. Northern Europe in particular had a supreme representative in Edvard Munch who was able to fully interpret the anxieties of the reality that surrounded him, transmitting in his canvases the emotional storm that every event, every circumstance experienced or observed provoked in him. Nada Nadj, born in Bosnia-Herzegovina but Viennese by adoption, somehow approaches that declination of Expressionism, through which she manages to get in touch with her own interiority leaving aside the aesthetic part of the work, because what she prefers is to leave the mark of her own emotion of the moment in which the brush is placed on the canvas, to tell and bring out sometimes painful memories of a personal experience or just observed but able to vibrate the strings of her sensitivity. However, for Nadj it is fundamental to maintain a stylistic freedom that allows her to move towards Abstract Expressionism, according to the narration that she wants to make protagonist of a work.

Not only that, her desire for freedom is also manifested in the choice of painting technique, in fact, she goes from oil, acrylic, watercolor that she mixes together as if they were notes of a melody that need to tune one to the other to achieve the final result. The chosen tonalities are smoky, earthy and sometimes dark, just to underline that restlessness that her marked delicacy of mind feels like a second skin, the fears, the nostalgia of memory, the wounds that an episode arouses and that survive a long time in the inner feeling. In the works more related to the description of human emotions Nada Nadj remains on a figurative nuanced, almost hidden in the features to give more prominence to the intense feeling that comes out of the canvas and literally invests the viewer.

Echo (Echo) are strongly representative of the restlessness and disturbance of contemporary man, who often finds himself having to deal with an isolation chosen and wanted in the name of a race towards realization that induces him to give up everything else; or perhaps a marginalization suffered and never accepted by virtue of which, even shouting his own discomfort, man finds himself only able to hear the echo of his voice, unheard by those who walk beside him every day without knowing him. 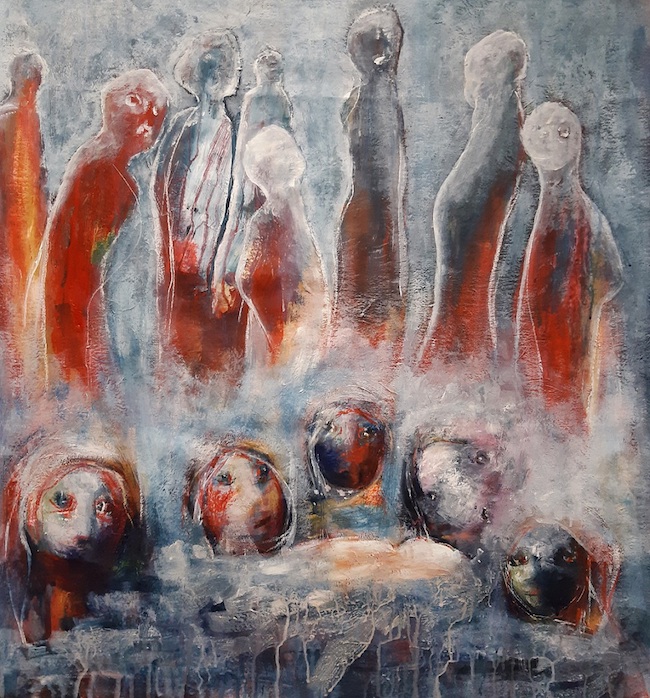 And again, in Die Beobachter (The observers) she puts the accent on the many children who suffer and die every day while a large part of the world remains watching, as if that suffering, that discomfort does not touch him, as if it were just a television image to watch with the same detachment with which one watches a film or a documentary, forgetting that instead the situation is real.

In End and Beginning, she tells of a city almost obscured by the ashes of a battle, of a war from which the only thing you can do is to be reborn, to turn the page, to rebuild everything that was there before and that hasn’t been there anymore; somehow in this work emerges a personal experience of the past that of the Nada Nadj’s homeland, which had to witness struggles and destruction to achieve its independence. This is perhaps why, in the most abstract works, such as Icarus Flugel (Icarus Wings)

she chooses to narrate lightness, those ideal wings that allowed her, and many of her people, to literally fly away from a world where they no longer recognized in to start a new existence less afflicted by the pain they left behind, more serene and luminous thanks to that flight that has drawn in their future the word hope. Nada Nadj has taken part to many group and solo exhibitions in Austria, especially in Vienna, but also in Croatia and Slovakia.