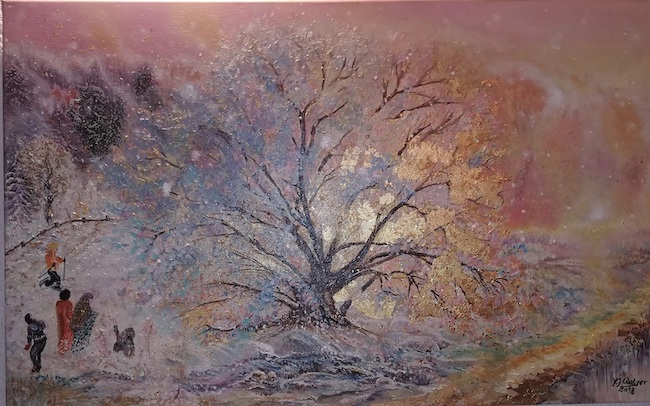 Often in contemporary artists there is almost an expressive dualism, a different way of manifesting emotions that are different from each other but which are part of the inner universe and, by virtue of this, need different styles to free at best. Today’s artist has the particularity of choosing two different styles to tell the same fancy universe in which her deepest feelings travel.

The Austrian Karin Walser has a sensitive and dreamy soul that becomes itself the basic impulse of every one of her works, of every one of her creations, of every one of her accessories, because her inspiration does not succeed in being part of a single sector, she feels the need to expand and draw on the knowledge acquired during her travels to tell about craft traditions she has learned and that she shapes on the basis of her own feeling. For paintings her versatility is manifested in the choice of pictorial style; she uses Oneiric Realism when she wants to remember but above all to express elevated concepts such as eternal love, rebirth, existential themes for which she needs to draw on legends and myths; Realism also adapts to her moment of memory, the remembering of fragments of travels, frames interpreted by the voice of emotion that tell a soft, romantic, delicate world, made of simple things. But when she moves into the dimension of dreams and sensations, then everything becomes more unreal, without borders, and the style that best suits this expressive mode is Abstractionism, always tuned to the dream world, with delicate, soft, nuanced and gentle tones, because this is how Karin Walser perceives reality, filtering it through positivity, love for beauty and simplicity, for the most natural sensations that derive from a pure feeling. The chromatic range chosen by Walser is always played on light, shaded tones, often using golden leaf to infuse more atmosphere to an image, to tell that behind every detail can hide the magic of an unrepeatable moment and therefore must be taken and highlighted, jealously preserved, to not lose it.

In his work The love of the future, she tells of a festive day, Christmas, which brings people to meet in the family, to let children be protagonists, they are future in fact, full of expectations for the new that will be warmed up and, at the same time, full of affections and of the hope that desires can come true; it is a lukewarm world despite the snow described by the artist, a memory of a childhood that can not escape if kept alive inside the soul.

Walser is very close to Russian Realism in this work as well as in Carrige ride on Millstätter Lake, for the reproduction of scenes from a recent past, wrapped in the charm of the typical horse-drawn carriages, from that rarefied sky that turns at sunset and that seems to want to accompany the protagonists of the painting to their destination.

The most romantic, highest side of this exciting austrian artist is revealed, however, through the symbols of profound concepts, as in Cosmic world change, in which she chooses the myth of the Phoenix to narrate the need of the contemporary world to be reborn, to adapt to continuous change and progress, to the imperative of having to get up and to rebuild despite everything, conflicts, clashes, risks, despite the difficulties that humanity faces.

And then again in The fulfillment in which two swans, symbol of eternal love because each one of them chooses a single companion for the whole life, are finally fulfilling their search, and the magic of that encounter is able to give and infuse an enchanted aura to the surrounding landscape, small in front of the greatness of an eternal feeling.

Karin Walser‘s desire for freedom of expression, finds a new channel in Abstractionism, when her creative impetus wants to manifest feelings without a defined scheme, but letting them flow on canvas and letting the colors, always linked to the interior and soul as magenta, pink, fuchsia and sky blue, tell the emotion that needs to free in the act of painting.

But Karin Walser also has an appreciated production of objects and accessories for the home, such as the beautiful hand-embroidered pillows with techniques that have their roots in distant countries – Paris, the monasteries of southern India, the Himalayas, just to name a few – and of which the artist has learned the techniques during her travels around the world, applying them to her creations. So the fascination is that of the contamination of styles and traditions, remembered on unique pieces of great artistic and manufacturing value to make homes a more exclusive place. Passionate about drawing since she was a child, Karin Walser has affirmed as artist in Austria but also in Germany and Italy, participating in important collective exhibitions, and in 2017 she won the gold medal in the “Pushkin and Gogol in Italy” competition of the Friendship Bridge Gloria Art Association, presented by the director Reinhard Auer, president of the Gloria headquarters in Vienna. Her works are permanently exhibited at Dr. Stephan von Stepski – Doliwa’s studio in Grafrath near Munich.