Home Lifestyle Lights and shadows of being a woman in a world of men...
Facebook
WhatsApp
Twitter
Linkedin
Email 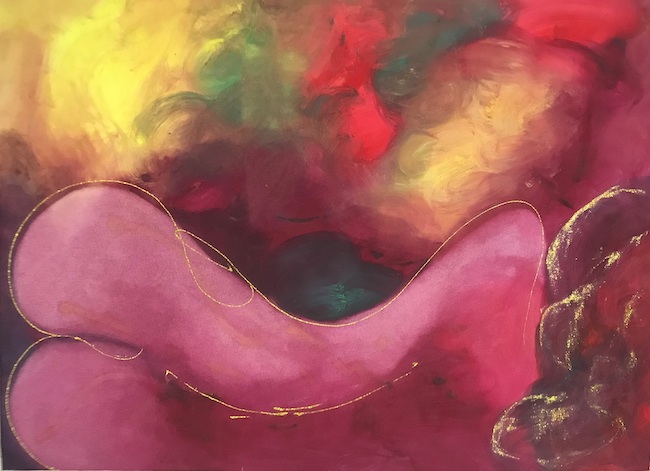 In today’s world the female figure has assumed an important and fundamental role following the struggles and conquests that took place in the mid-twentieth century; there are, however, countries where her role is still secondary, in the shadow of the male one, and making her voice heard is still a way to go. Today’s artist wishes, through her works, to put that voice in the foreground, recounting its weaknesses and shyness but also the audacity and the need for naturalness that she is often denied.

Pakistan is a country with a rather complex structure, where women’s illiteracy is still high precisely because of the conviction of the predominant and superior role of men, even though there are international associations and strong female figures who are trying with every means to change that now decidedly anachronistic reality. Samina Jamshed belongs to that restricted group of privileged women who have been able to complete their high school studies, in her specific case the artistic ones that ended with a degree in Fine Arts at the University of Lahore followed by numerous specialization courses in various disciplines in Islamabad. Her pictorial style is strongly expressionist, both for the choice of the chromatic range and for the tendency to let the emotional impact prevail over the aesthetic one, but also close to a Symbolism somehow necessary to whisper, rather than to shout, what she needs to express without finding opposition about the possibility that her works can be enjoyed by the public. Both painting movements have, in different ways and at different times, given evidence of how much there was beyond the image, beyond the representation of objective reality, and how much of the unexpressed in classical painting could instead be strongly revealed by upsetting the traditional canons. Symbolism, already at the end of the nineteenth century, was a way to detach from pure form in order to re-appropriate the subjective vision of a reality that previously appeared icy, distant from that inner world that belonged to the artist. Telling spirituality within the visible was the imperative of that movement which, in fact, laid the foundations for the subsequent Expressionism to which decided to join many interior restless painters, who, precisely because of their incisive expressiveness, marked an era: Munch, Schiele, Gauguin, Van Gogh. The aggressive, strong, high-sounding colours of Expressionism became the main notes of the anxieties, fears or exhilarating emotions of the major representatives of this current, and essential for manifesting an inner world that did not want to be held back at the cost of fall impetuously and aggressively out from the canvas in some cases.

Samina Jamshed approaches this style to manifest her ideas on the female world and to allow, interpreting its essence, the many women of her country to have a voice, to be able to express those feelings that in everyday life are forced to leave within themselves, that desire to make their presence felt without the excess of the shout but with the determination to know how much their role counts even in a society that tends to want to underestimate it. Precisely for this reason Jamshed wants to give them the right to tell their stories, to reveal and manifest moods, perplexity and mortification in front of the silence behind which they must hide.

The Moods of Eve cycle narrates the range of emotions that the artist reads in the glances of the women she meets, and in her works there is a constant veil of melancholy, a subtle sadness for the conscience of being unheard, of not being able to externalize what their sensibility senses and feels because of that feeling of being sidelined by a male world that prefers to look beyond rather than accept their silent requests.

She hides those faces behind rarefied atmospheres Samina Jamshed, as if they were veiled by a fog from which it is still difficult to get out, yet she makes them intense, strong, proud, dignified and resilient in their desire to be able to change an objectively immobile reality but with the foresight and hope that even if slowly something can move.

In the series Images of Soul, Jamshed dares much more, describing female nudity, where in her country it cannot be accepted, which becomes a metaphor for having to strip herself of rules and principles completely outside of a time running towards another direction; the figures represented are hidden behind intense but blurred colours, their contours and details that would make the artworks too explicit, hidden behind a foggy blanket from which the shadows of their essence emerge in a discreet way, in order to affirm with resilience their own will, their need for freedom without being excessive or impositional.

Not only that, the notes that vibrate are also those of the need to communicate a multi-faceted interiority, delicate but strong, which too often is suffocated, silenced and not manifested, sometimes wounded, but always present and ready to escape as soon as it is given the opportunity to express itself.

In her drawings, in which she approaches Egon Schiele’s Expressionism, Samina Jamshed indulges in a greater audacity, sketching with charcoal the bodies of naked women, almost posing without fear of showing the imperfections, the fragilities that emerge from those natural gestures, timeless and placeless images, icons, with that explicit physicality, of a canon of classical beauty immortalized for centuries and for this reason innocent and beyond the sinful sense with which in some societies it is interpreted. During her long career Samina Jamshed has participated in many group and solo exhibitions in India, won the First prize for Oil Painting at the S. S. Hyder Award in Peshawar and the First prize for Sculpture always at the same event, and finally the First prize for Creative Art at Viqar-Un-Nisa College in Rawalpindi. She currently holds courses in Art and Sculpture and collaborates with the International Commission for Catholic Migrants as Coordinator of the GBV and CBP project.