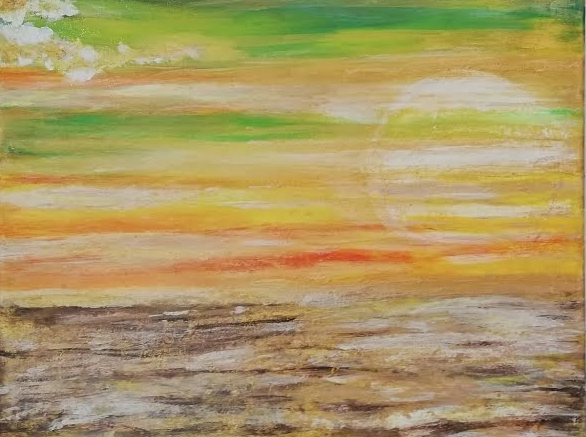 The attitude to tell views and panoramas often turns into a manifestation of interiority, of memories, of emotional moments for which the hand becomes pure executor of the connection with sensations impossible to hold and, sometimes, to define. Today’s artist goes beyond the boundaries of the visible to narrate emotions that need to move within expressive freedom, to reveal themselves in all their facets.

Marijana Vukovik discovered her inclination towards painting very late in life, but when she accepted the creative impulse to reveal herself through art, she let herself be completely overwhelmed by it, enrolling in master’s degrees and releasing the energy that asks her to produce one canvas after another, as if everything she had unconsciously held within herself was still impossible to hold back. The choice to approach Expressionism is undoubtedly linked to that need to tell the emotions, the sensations she perceived when she was in front of the scenarios that she then reproduces; the expressionist movement, preceded by Fauvism whose guidelines it took and expanded, was the one that most emphasized the importance of feeling rather than to the aesthetic reproduction of reality, the one that placed on a higher level the interrelation between the artist’s state of mind and what his eye captured, more than the need to describe objective images by embellishing them with harmonious details that were to enhance the classic sense of beauty. The two different orientations of Expressionism, the Abstract one of the New York school that had Jackson Pollock as founder, and the classic one of the great masters such as Vincent Van Gogh, Paul Gauguin and the german Emil Nolde, just to mention those who expressed themselves in a broad and incisive way on the landscapes, had as an essential point precisely the characteristic of recounting sensations often strong, incisive, impetuous because not filtered by the balance of reason. However, somehow this new artistic form was anticipated by some exponents of the movement usually considered antagonistic, Impressionism, which saw in Claude Monet and Paul Cézanne examples of how even aesthetics can be individualized and told through an emotional world that upsets traditional patterns. Marijana Vukovic blends these two pictorial styles stay in balance between the figuration of Impressionism, even if recounting it through the tones of the deepest emotions, the sensations perceived and received a moment before the impulse to paint them, and the abstraction of Expressionism in which the image hides inside the emotional richness it generates, inducing her to leave out the details to focus on the essence that comes out of the canvas, letting the fragments compose the chorus of notes that help to tell the transport experienced in front of that contact with nature, with the simple yet incredibly beautiful wonder of a sunset, a glimpse or a meadow.

Her emotions are serene, positive thanks to artist’s smiling approach to life, the atmospheres of the works involve the observer thanks to Vukovic‘s ability to express herself through the essentiality of the sensations, with the simplicity of naturalness, with the softness of the bright and at the same time warm tones that induce to get lost in those landscapes sometimes more defined, other times just mentioned.

In the work Sommer am Meer (Summer at the seaside) for example, the colour of the sky at sunset seems to want to wrap the memory of a past but still vivid season, in which the calm sea accompanies and cradles the sails in the background infusing that slow and relaxed rhythm typical of holidays; and again in Thailand Grüße (Greetings from Thailand) Vukovic lets the memory go towards a nature different from the one her eye is used to see, uncontaminated and yet equally familiar precisely because of the experience that remains in the artist’s emotional treasure chest. In both works, the figurative part clearly dominates, even if welcoming the range of colours most linked to Expressionism, in which the tones are equivalent to letters that make up the poetics of sensations to give life to the final image, the one that touches the emotional strings of the viewer.

The work Italian Dreams seems to be a phase of transition between Impressionism and Expressionism, the stains of color are used not to capture light and give a greater sense of reality but to tell the acceleration of Marijana Vukovic’s emotional beats when she imagines Italy, that mixture of sun, sea, nature and perfumes coming out of the canvas itself.

Then she turns towards the Abstract in Mountains, in which the mountains of title are narrated with dark and unnatural colors perhaps to describe the sense of loneliness that you feel when you are at the top of those peaks, the risk of not having any hand to grab in the moment of need because to reach the top you have left everything else behind; and again Hoffnung (Hope), a work in which Vukovic adds a material element that breaks the grayscale background with its presence to determine the opening towards a new, unthought out possibility, a solution that comes unexpectedly and that can change the face of the present and the options of the future. She has recently started painting Marijana Vukovic and yet she has already exhibited in Vienna, Barcelona, New York, Zurich and Udine; she loves to donate her works to support humanitarian organizations.