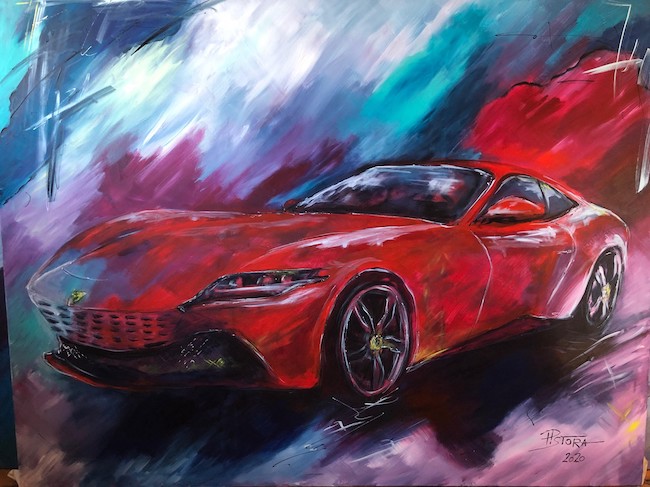 Very often throughout the history of art, the tendency to reproduce reality as faithfully as possible has been set against the opposite need to let emotions predominate to the detriment of an aesthetic sense and a harmonious form, giving rise to a kind of clear division between artists belonging to one or the other current. Today’s protagonist belongs to a new pictorial movement that combines both positions and harmonises them to create artworks with a strong emotional impact.

At the end of the nineteenth century, a profound rift was created between those artists who were more attached to a classical approach to painting, and to a representation of the observed reality as close as possible to what the eye saw in front of it, without expressing the emotions of the painter on canvas, and those who began to feel the need to clear customs of the inner world, the more intimate, more emotional impressions and sensations to which they wanted to give predominance. This was to the detriment of the sense of aesthetics, perspective, chiaroscuro and all that was fundamental in the other style of painting. Realism, therefore, strongly marked by the meticulous description of every detail of a face, of a dress and of the scenes depicted, was contested by the artists who adhered to Expressionism, who instead preferred to renounce beauty and harmony in order to give voice to that deep inner world that had to be released spontaneously, sometimes impetuously if the emotions perceived were tumultuous. From the attention to social themes that Realism dealt with in the artworks of Gustave Courbet and Giovanni Pellizza da Volpedo, towards the end of the 19th century artists moved on to the multicoloured canvases, devoid of perspective and characterised by sharp, outlined contours of figures on the edge of reality and colourfully unreal landscapes of the Fauves group, whose greatest representatives were Henri Matisse and André Derain, in a stylistic contrast that gradually faded with the passage into that century of modifications, transformations and synergies that was the 20th century. As the decades went by, Realism changed its initial intent and became predominantly a deeper and more psychological analysis of contemporary man, as in the case of Edward Hopper‘s American Realism, while Expressionism in turn lost the impetuosity and negative feelings linked to the disorientation of the historical period in which it was born, to open up to an exploration of the intimate and inner feelings of the human being, as in the case of Lucien Freud‘s Neo-Expressionism. In the contemporary world has developed an artistic movement, founded by the Austrian Voka, that is an unusual fusion of the two styles and is known as Spontaneous Realism. Ulrike Pistora, whose aka is Müke, belongs to this new current, personalising and revisiting its guidelines to give it a completely personal imprint stemming from an emotional world that cannot prevent itself from manifesting and linking up with a memory or perceived atmosphere. She loves to recount the profound sensations that she feels surfacing when her gaze rests on an urban landscape, on a cityscape, or – and this is one of her most distinctive features – on the vintage cars or contemporary sports cars that are one of her passions and that have enabled her to be appreciated in the circles linked to that specific sector. Her realistic stroke, which is incisively delineated in the drawing and hatching of objects and places visited, mixes with her emotional world, the one through which Müke describes that range of colours and sensations perceived and which she cannot detach from her actions on the canvas.

In Amsterdam she highlights the city’s symbols, bicycles, which she places in the foreground almost as if to describe the reassuring pleasure that comes from those quiet, peaceful means of transport, enveloping the city itself; the bridges and canals evoke in her an amused and enthusiastic memory that is at the same time serene, calm, as if she had lost herself in those canals and streets, rediscovering a new self.

In Stockholm the atmosphere seems to be more intense, the tones chosen are stronger, brighter, though always maintaining the nuance typical of this talented artist; the protagonist of the painting is an evocative view, a characteristic corner of a northern capital, with all the charm that it exerts in the common imagination, just as much as Mücke was enchanted by it in the fragment of an instant in which her interiority breathed and absorbed the photogram then reproduced through the filter of emotional memory. One of the characteristics of Spontaneous Realism is the impulsiveness of the pictorial act, the creative speed that had been peculiar and a fundamental trait of Impressionism and that in this case is is applied to a style in which drawing becomes indispensable as the basis and completion of the artwork itself, and it is precisely that unique and unrepeatable feeling of the sensation that Müke immortalises in her canvases.

Even in her paintings dedicated to cars, she succeeds in instilling in the observer the sensation of being in front of an almost magical setting, suspended between dream and reality, in which the car becomes the absolute protagonist, as much as the admiration that the artist feels for the perfect lines, elegance and beauty of those queens of motors that have written the history of the automobile and that have remained in the treasure chest of many people’s desires, often only a dream too far away to believe it possible to achieve.

The Aston Martin, the Bentley and the Corvette are some of the historic four-wheelers of which the artist brings out the best side, the most bewitching, the ones that identify them and that have made them famous among enthusiasts of all times. The colours chosen for the backgrounds are not only akin to the emotions that Mücke faces when she chooses to reproduce a model, but also to the characteristics of the car itself: more roaring and almost aggressive when she portrays the Ferrari, more elegant and refined for the Bentley, more dynamic and metropolitan for the Corvette.

On the subject of classic and luxury cars, she has had a series of exhibitions at Festung Hohensalzburg, Classic Remise Berlin, Kitzbühel Classic or Casino Bad Füssing, to name but a few of the most important venues. When she also started to portray more recent models and luxury sports cars, she was asked to exhibit at the International Racing Days in Velden, BMW and Mercedes Austria, Bentley Autohaus Hannover and many others. In the five-star hotel Ansitz Plantitscherhof in Merano, where classic car rallies are organised several times a year, the largest collection of her car paintings is on display and several themed suites are furnished with her paintings. Müke Ulrike Pistora regularly organises an annual festival in the garden of her house in Wiener Neustadt, in which art, music and gastronomy enter into a synergistic dialogue to envelop the public.