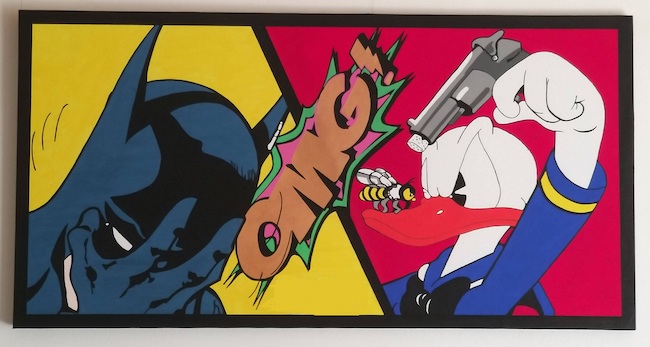 The world of comics has not very often been linked to that of art, although there have been some examples where the two creative expressions have merged and found a splendid connection; despite the immediacy and recognisability of characters known to the general public, this union is not a very beaten path by contemporary artists. Instead, today’s protagonist makes it the main feature of his production thanks to which he is easily and immediately identifiable.

Around the middle of the Fifties of the twentieth century, an advertising graphic designer of Slovak origin with the name of Andy Warhol, had the brilliant intuition to introduce into art icons and symbols of everyday life of the American population, struggling with consumer products, with the explosion of the passion for cinema that became a moment of aggregation generating icons to be taken as an example and model, and with a new economic prosperity thanks to which a middle class not educated and cultured enough to be able to approach art in the most traditional sense was emerging. Especially with the advent, in the years before the birth of Pop Art, of hermetic, cryptic pictorial currents, necessary to mark the gap from classical artistic forms but at the same time absolutely distant from everything that the eye could recognize, the intellectual and cultural environment had moved away from the wider public that remained more and more distant. The movement theorized and founded by Andy Warhol therefore set itself the mission of narrating, through screen printing artworks, and therefore at a much more accessible price even to the new emerging middle class, the symbols and icons of that era by getting closer to ordinary people: Campbell’s Soup, Coca-Cola, Marilyn Monroe, Elisabeth Taylor and so on, up to Mickey Mouse, the only comic book character protagonist of Warhol‘s works. Alongside the founding father of Pop Art there was another great representative of this revolutionary pictorial movement, who instead chosed the world of comics to distinguish his canvases that have consecrated him to immortality: Roy Lichtenstein. His basic pointillism was necessary to create the perfect setting for the faces portrayed, the onomatopoeic expressions typical of his artworks, and the impact on the observer who felt at ease admiring something that his eye was already used to look through the pages of comics. Another great Pop artist in turn dedicated numerous portraits to the new cartoon heroes, Steve Kaufman, thanks to whom Superman and Spiderman also entered the art galleries. The Austrian Andreas Ditzer, aka AnDi, takes up the theme that had made his predecessors great but adapts it to the new heroes of comics, whose he shows their human, ironic, desecrating side, making them much closer to men and women of contemporary society. Ditzer‘s irreverent ability to mock the Superheroes reveals a careful look at the vices and virtues of modern man, laying bare the undeniable reality that, despite the appearance of invincibility and infallibility that everyone tends to show and with which they would like to identify, in the end they always have to come to terms with the mistakes, falls, vicissitudes and sometimes naivety that are part of everyday life.

The story that AnDi tells over the tragicomic episodes of the contemporary individual is not heavy, it is always filtered through the amused and sometimes stinging gaze that can only induce the viewer to see the comic side of the protagonists of his canvases, but then, later, to reflect on himself and the circumstances that belong to his existence and that of those who are part of his world.

Not only that, Ditzer also observes those little manias, those slight tics that unconsciously are repeated until they become part of the normality of each person and that can be seen as strangeness by someone else, precisely to underline the diversity and inhomogeneity of the essences that belong to each person, and makes it tell the story of a Batman cought when he brushes his teeth, of a Superman who picks his nose or of Wonderwoman as she can’t stop herself from scratching her buttock, perhaps annoyed by the elastic band of her succinct costume.

And again Minnie is entrusted with the task of representing the most tempting feminine essence, the one capable of becoming even diabolical when the conquest is at stake, whether it be that of a man or a professional objective, an essence that is emphasised not only by the horns and the devilish tail but also by the onomatopoeic sound that dominates the entire canvas, that Bam that which underlines the fearfulness of a woman who has set herself a goal to achieve at any cost.

In Kiss of Death the artist, in his usual light and comic book style, wants to deal with the delicate theme of dangerous relationships, those that lead one of the two sides to suffer and to inner destruction, and that often reach extreme and unexpected consequences; as much as in Love beyond Deathhe wants to tell about those loves that survive anything, even the final passing.

In this work, in fact, the two protagonists are smiling, accomplices, aware that any event cannot separate their souls. Love, life, death, defects, comic episodes of contemporary life, freedom of speech and press that disinguish the Die Macht der Stiftes
canvas, diversity, all themes that come out of Andreas Ditzer‘s canvases only after a deeper look, which does not stop at the exteriority of the form, but rather captures that artistic and inner sensitivity that is cleverly hidden behind a smile, behind the irony and the tendency to comedy that distinguish this particular and exciting artist. In the course of his career Andreas Ditzer has exhibited in several group exhibitions in Vienna and from some years has began taking part in the Vienna Art Market, an important annual Austrian event for contemporary art, which has given, and gives him, a great success with the public.