Home Lifestyle Return to the aesthetic taste of the past to stop the fast...
Facebook
WhatsApp
Twitter
Linkedin 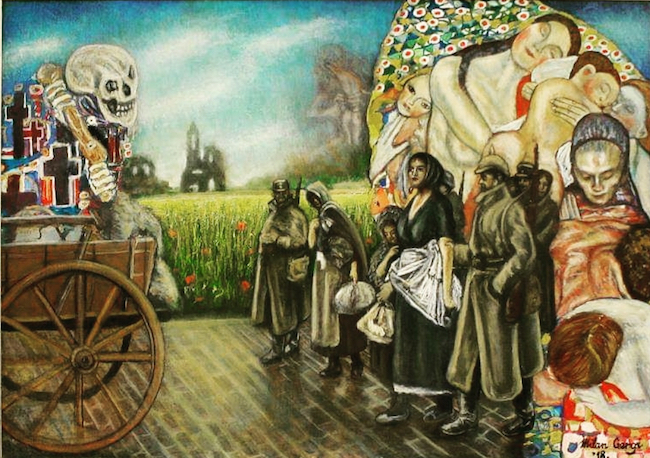 Keeping a strong link with everything that has represented and marked the course of art history is not a very common path for contemporary artists who seek instead to take new routes opened by the masters of the last century, rewriting the guidelines and re-proposing them in a more modern way. Instead, today’s protagonist artist is deeply linked to a more classical, more traditional moment of international painting, to express the desire to elevate artistic creation and seek its essence outside of modern time.

The historical periods of the fifteenth and seventeenth centuries, constituted a fundamental point and a solid structure from which the subsequent artistic movements of the following centuries developed, sometimes regaining their essential characteristics while others tried to overcome them going beyond the aesthetic and representative value to rediscover an essence, a more emotional approach, which then had the highest representation with the Romanticism. The Renaissance art and the subsequent Baroque period, consigned to history the greatest masters of all time, those unforgettable authors of famous works in which they represented their sense strongly oriented to the perfect harmony of forms and almost scientific research on colors and perspective to make the characters and scenes as relevant as possible to reality; not only that, they also dictated rules and innovative techniques in art and which are still used in contemporary painting. Michelangelo Buonarroti, Leonardo da Vinci and Raffaello Sanzio excited and continue to excite enthusiasts from all over the world, as did Rembrandt and Vermeer of the Baroque period, expanding and enriching the research on colour and light of their predecessors in order to consign canvases of great intensity to eternity, although the approach to the composition of the work was more oriented towards representing reality in an objective manner, deprived of emotional interference by the artist. The use of the perfectly executed drawing, the vivid tints and the various layers of colors to achieve the chiaroscuro that made the subjects incredibly faithful to what the eye could really observe around it, the love of beauty and the sobriety of the lines, and a perspective that made the scenes perfectly adhere to reality, were common elements that went beyond the choice of subjects to be immortalised. From landscape to portrait, from still life to religious scenes, the two movements and their main representatives artists explored different aspects of society at the time. The Croatian Milan Gergi based his artistic expression on the exploration and study, as a self-taught artist, of these great masters, from whom he drew in his pursuit of the perfection of the image, in the description of every detail of faces and landscapes, images these ones whose he likes to recount beauty and balance typical of natural world.

He approaches Flemish painting in Stilleben (Still Life), in which he chooses to immortalize a domestic scene, a juncture just after a meal consumed in the warmth of the fireplace and immediately preceding the gestures that are performed to tidy up the table; the intense, blurred colours, the attention to every minimum detail and the centrality and importance of inanimate objects cannot fail to bring to mind the artworks typical of the artists of that long artistic period in which Dutch painting experienced its golden age.

In portraits instead, such as Maria and 103-järige Frau (103-year-old Lady), Milan Gergi reveals an imprint closer to Baroque Mannerism, of which Tiziano and Van Dyck were the greatest representatives, both for his ability to capture the most spontaneous expression, despite being the protagonists posing for the portrait, both for the mastery in telling every wrinkle, every crease, every disheveld hair that touches their faces, and in perfectly representing the play of light and shadow through which he highlights those details that contribute to make them unique. But the artist does not stop here, in his research oriented to recover the classic taste of art and to urge observers and art lovers to never cut the link with a past that cannot be forgotten in the race towards the future typical of contemporary society, woth too short memory because it is projected to quickly consume information and images that should instead be preserved in the collective cultural heritage. So Gergi chooses to create works inspired by the great masters of the past centuries to pay homage to them but also to remind the observer, and the world of contemporary art, how important it is to keep alive the memory of their timeless style but also to bind it indissolubly to a present that does not necessarily have to conform to the times, not in art and not in beauty, but can keep intact that classical taste that manages to stop the passage of centuries and demonstrate how creative expression can sometimes run on a separate track from contingency.

Works such as Pieta-Homage an Michelangelo (Pietà-Omaggio a Michelangelo) and Jesus mit Kindern-Homage an V. Bukovac (Jesus mit Kindern-Homage an V. Bukovac), or Erste Weltkrieg-Hommage an Klimt (First World War-Homage to Klimt) the image on the cover article, manage to commemorate great artists who with their canvases have left a deep mark on world culture, though filtered through the personalization and point of view on historical and religious events that distinguish Milan Gergi’s style.

Finally, his classical approach cannot fail to reveal itself also in the landscapes, a manifestation of admiration for a nature that in itself constitutes a work of art capable of letting emerge all the uncontaminated beauty that surrounds a man too often distracted by the traffic and cement of the cities. Milan Gergi currently lives and works in Austria in his atelier in Hainburg, Donau, and is a member of the Rima Association in Nasice, Croatia, and of the Brucker Art and Culture Workshop in Bruck a.d. Leitha, Austria.