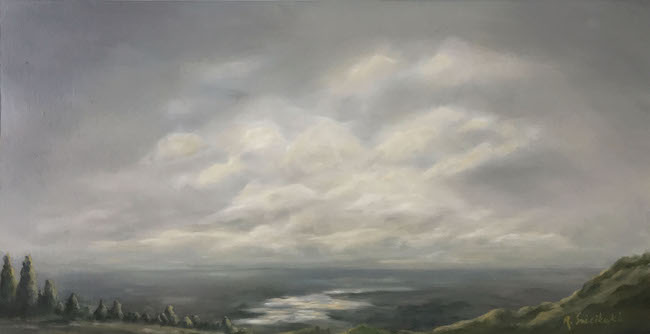 In the choice to represent the views and glimpses of places close to the interiority, memory and experience of each artist, there is also the tendency to tell the feelings, the emotions that those places have aroused in the moment of observation, of visual contact. In some cases the narration is transformed into a poetic rhythm, as in the fascinating paintings of today’s protagonist.

It is impossible not to associate the works of Renato Sniecikoski, Brazilian from the city of Curitiba, in the state of Parana, with those of Romanticism, an artistic period between the late Eighteenth and early Nineteenth century, which left a deep mark and a fundamental basis for the subsequent Impressionism. In particular, it was the English one that gave a new meaning to landscape paintings thanks to the oneiric-visionary atmospheres of the immense William Turner, undisputed master of light and the sublime in which nature assumes prevalent importance, often the only protagonist of the works, both in its liveliest and most violent forms such as storms, fires, shipwrecks, and also when it engages in harmonious and serene dialogue with the human being. But what characterized and consigned him to history as a precursor and first impulse to subsequent impressionist themes was precisely the original use of colour and light to the detriment of the detailed definition of images typical of Realism. It is precisely on these two very important bases, the light and the indetermination of details, that Renato Sniecikoski‘s pictorial research is inserted, for whom the dreamlike dimension, or perhaps more imaginary, becomes fundamental to express and narrate the places impressed in his memory, glimpses of remembrances from which he starts to represent the sensations that had aroused in him when his gaze was lost in them, decidedly more prioritary than the need to place those landscapes in a specific place.

Sniecikoski‘s works belong to an indefinite world, suspended between reality and fantasy, in some cases more descriptive of everyday images, in others more linked to dreams, to an unreal yet magical, comforting, enveloping world despite the clouds and mists from which it is often enveloped.

The soft tones, the strongly present nuances, the inclusion of details and figurations often fruit of Sniecikoski‘s mind bring him somehow closer to the concepts of oneiric Symbolism, for his mastery in mixing what it is with what it could be, or rather with what the artist himself would like it to be, as if his idealism could not be contained by reality, as if his reflections needed to find a voice, a way to manifest itself outside of his interiority.

The work A Window to the Sky seems to suggest to the observer how high one can go if one rises from the contingency, if one detaches oneself from the ballasts of everyday life to pursue dreams, desires, the most inner drives that often, for insecurity and lack of courage, are imprisoned inside the emotional cage of renunciation.

Or Faraway landscape, a work in which the setting becomes an exhortation to look beyond, to follow one’s own path even when it does not seem to be welcoming, because it is often right after the desert that one encounters the oasis, the one that Sniecikoski places in the background, a sort of City of the Sun theorized by the philosopher Tommaso Campanella, an ideal place to arrive at following a route of knowledge and deepening of oneself. View from the hillside Belvedere, the artwork in cover, is the closer to Turner’s Romanticism, both for the wide view in which the sky seems to predominate over the rest of the landscape, and for the use of light, soft yet incredibly capable of illuminating the clouds and fog that seem to pervade the painting, capturing the eye of the observer for that soft, muffled atmosphere, and then lead him, only later, to the valley below, exterminated but secondary actress of the immensity of the sky.

In The Sea the Boat Loneliness, Sniecikoski places the accent on the harmony between man and nature, that sense of protection that the navigator perceives despite being alone between ocean and clouds, and despite the silence around him and the large clouds in front of him he does not feel the sense of danger, quite the opposite, the impression is that he is perfectly at ease in that suspended world, lulled by the waves and enveloped by the sky from which he seems to feel protected and wrapped, because often, the artist suggests, solitude is a necessary choice to face one’s own personal journey towards the deepening of one’s essence.

Fishermans and Landscape with Araucaria Pine Tree belong instead to the more realistic landscape, more linked to Sniecikoski‘s visual memory, to the representation of places he met on his way, on his pilgrimage in the Brazilian territory to capture details and frames that the artistic nature pushed him to know, to discover, to find and then be impressed and narrated on his canvases. He mainly uses oil colors that he spreads, layer upon layer, to give his works that shaded, impalpable, soft appearance that make them immediately recognizable; perhaps it is his self-taught training and the study of the masters of the past that allowed Renato Sniecikoski to leave his creative nature completely free to experiment and to give life to his fascinating painting style.