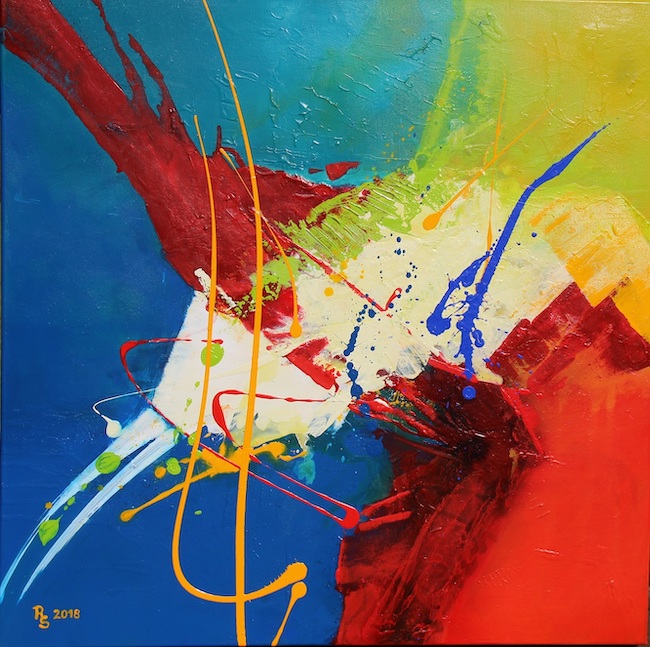 The contemporary world panorama is multifaced and varied precisely because it mirrors today’s society which places individualism, interpreted as a personal and unique approach, at the centre of the stylistic freedom that could not fail to distinguish our era; the artist therefore manifests his interiority through the language that he feels most akin to his characteristics and creative strings, telling the viewer his point of view on many aspects of existence. Today’s protagonist has the singular and unique ability to make colours vibrate to the point of becoming vital explosions of an unstoppable positivity.

When, in the mid-1950s, Jackson Pollock decided to break those levees that had tied Abstractionism to forms and rules that were too geometric, too mental and rational, disconnected from an emotional world that, according to his point of view, had to be inextricably linked to the artist, perhaps he had not foreseen how much his idea would find approval in creatives with completely different stylistic approaches, even though they all came together under the common denominator of Abstract Expressionism. Within this great and important current that gave the possibility to all the artists who could not, and did not want to, fall within the scheme of Geometric Abstraction, Material Informalism, Conceptualism or Spatialism, just to mention some of the most important movements of the time, to belong to a group in which they felt accepted and welcomed by virtue of their unique and singular ability to express their emotions that inevitably came out of their canvases. Action Painting, the technique theorized by Pollock and which characterized all his artistic production, Color Field, which distinguished Mark Rothko and Elen Frankentaler, and Tachisme, of which the German Hans Hofmann was the master and maximum exponent, are completely different approaches to the inner and emotional world of the artists who adopted them as a form of expression, some more impulsive and others more meditative, some more melancholic and others more solar and lively. All with the same ability to overwhelm and take the observer by the hand and lead him or her inside the artwork itself. The austrian artist Roswitha Schablauer arrives at Abstract Expressionism after a more figurative path, as if from a specific moment the indeterminacy of the boundaries of the visible was necessary to manifest in a more incisive and intense way, for herself before the others, inner sensations and movements that no longer accepted the chains of the figurative form.

In her canvases she cleverly mixes the soft Color Field, very close to Frankentaler‘s works for the choice of roundness and indefiniteness that excludes the rigor of geometricity, and the intense, strong, primary and often contrasting tones that however generate an incredible chromatic harmony closer to Hans Hofmann‘s Tachisme, thus giving life to a personal and recognizable style capable of capturing and involving the viewer of the artworks. Schablauer tells of fragments of moments, of emotions that wrap in a second and in the one immediately following ready to be projected and captured by something else while, very often in contemporary life, what has just happened is left behind and almost forgotten.

Instead, the artist exhorts us to live the present moment, to feel it vibrate with all its beauty and intensity, to abandon ourselves to the sensations that it arouses and that will never come back, not with the same form, discovering every aspect and implication that cannot, and should never, be neglected because of the rush of living. It is a vital and lively look at the reality of being, from which shines a love for every event, for every detail, for every single episode that is perceived as something unrepeatable and unique, and precisely for this reason it must be enjoyed and lived to the full, with the wonder in the gaze and the smile on the lips, gathering at full hands the energy and also the teaching that is generated even by events seemingly less positive. The chromatic range that distinguishes and makes Roswitha Schablauer’s canvases recognizable is made up of intense tones, such as red, blue, yellow, and the juxtaposition, synergy, between warm and cold colors that, precisely by virtue of that promiscuity, releases that warmth and energy that can lead the observer to a level of involvement of the senses and emotions almost enthralling.

She tells of eclectic, dynamic personalities, as in Globetrotter, or unforgettable days, as in Funny day and Summerdream, and therefore necessarily imprinted in the memory of the artist which, by virtue of its expressive capacity, are linked to the dreams and personal memories of those who are in front of his canvases, thus inducing a path towards the essence of emotional memory.

But she also leaves space for personal interpretation, for the individual reading of each one, when she chooses not to give titles to some canvases, expanding the concept of freedom that must not only belong to the creator of the images but also to the observer, making the energy of the colours and the composition turn into decoding the subject on the basis of one’s own emotionality, one’s inner phase, or simply of the sensations that the visual impact of the work he receives.

Roswitha Schablauer‘s canvases have been exhibited in more than one hundred group exhibitions and international fairs in Austria, Italy – Florence, Ferrara, Padua, Genoa and Forlì – in Budapest, Berlin, Huston (Texas USA), Paris, Cannes and Dubai, always enjoying great success among the public and insiders; in 2015 she won the Tiepolo Prize and in 2016 the Leonardo da Vinci International Prize.