Home Lifestyle The celebration of nature and beauty in the artworks of Jagoda Lessel...
Facebook
WhatsApp
Twitter
Linkedin 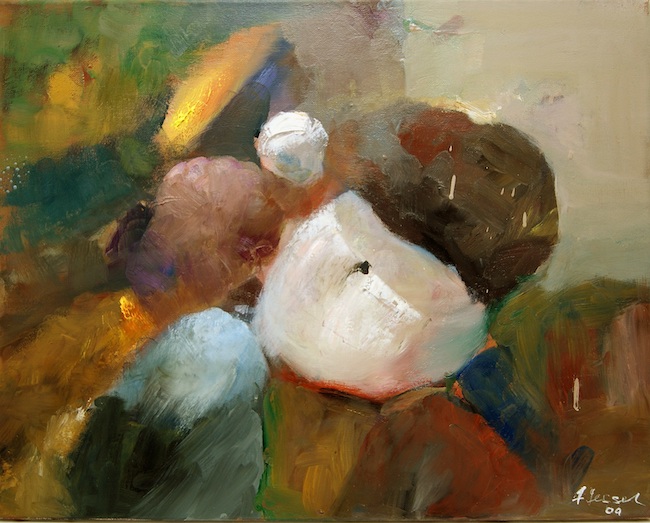 When one thinks of the tendency of art to reject visible form, one tends to consider this type of expression as an intense manifestation of an inner turmoil, of feelings that press to come out because they have been kept hidden and protected for too long in an intimate world from which they must suddenly and impetuously emerge. The artist I am going to tell you about today, on the other hand, chooses to observe everything around her with a poetic, almost enchanted gaze, and it is of that positive and magical sensation that she narrates in her artworks.

Around the 1940s, the situation in Europe and the rest of the world was highly unstable and uncertain due to the Second World War, which had deprived artists of serenity and points of reference. They felt the need not only to find a more appropriate expressive language for the emotional and existential disorientation that the world of art was going through, but also to discover the best way to express their rejection of that external form, of the link with an aesthetic that no longer made sense in that particular context. Thus, the pictorial gesture already became a work of art itself, an irrational and impulsive way of communicating emotions, sensations, discomforts and inner feelings solely through the use of colours, without any filter from the reason that should have been called into play in the case of the representation of a defined form. The movement that made this intention, that of absolute expressive freedom, its own, transforming it into the guidelines at its base was Abstract Expressionism, which was marked by a strong heterogeneity of the artists who adhered to it, but who had the common point of expressing their emotions in the manner most akin to their own nature and characteristics. The impetuousness of Action Painting was flanked by the calmness of Colour Field, the dark atmospheres of Franz Kline and Robert Motherwell were confronted with the monochrome ones of Ad Reinhardt, just as the frenetic weaves of Mark Tobey dialogued with the positive and sunny outlook of Helen Frankenthaler and Hans Hofmann. The fascination of their canvases consisted precisely in that total and complete abandonment of form in order to give space and voice to non-form, that undefined universe within which emotions found their most appropriate place, because it was precisely through their canvases that art lovers were able to feel deeply and immediately involved.

Jagoda Lessel, an artist of Serbian origin who has been living in Vienna for many years, belongs to that category of artists who are unable to submit to the rules of figuration, despite the fact that in some of her canvases she allows a light drawing to shine through, an impalpable line that defines the emotion narrated in the title rather than the image itself; the need to deal with colours is as instinctive as it is fundamental to her personal creative language, which tends towards positivity, the musical and poetic interpretation of what revolves around her and on which her gaze lingers, involved and transported by the sensations she receives. Jagoda Lessel is inspired by music, nature and the circumstances of existence, as if her inner world needed connection, contact with the outside world, in order to better understand herself and her surroundings.

Each canvas becomes an interpretative and narrative experience, precisely because exploration and contact with one’s own interiority are fundamental to the artist’s evolution, which she cannot ignore, and thus each detail, each event, each reflection, become moments and circumstances to be immortalised, to be conveyed through her canvases.

In Aufbruch (Departure) she tells of that phase of estrangement that everyone has to deal with in their lives, whether it be short or long term, and it is for this reason that the range of colours chosen by Jagoda Lassel is at once cheerful because of the sense of discovery and enthusiasm with which we tend to experience every journey, but also somewhat melancholic since in fact we are leaving an affection, a place, a habit, dear to our inner selves; her abstract tends towards the figurative, as if the colours gave life to shadows, to figures that are the protagonists of the action, as if those contrasting shades constituted the varied and multiple emotions that characterise the departure or the group of people with whom the journey is undertaken, as if that movement, that going was a metaphor for life itself.

In Tschaikowski 4. Symphonie (Tchaikovsky’s Symphony No. 4) Jagoda Lessel interprets the magic of melody, associating colours with musical notes without neglecting the subtle line of the drawing, which becomes a common thread, a melodic chord without which it would not be possible listen to the whole symphonya; the range of colours is in harmony with the lively, vivacious structure of the composition, and thus the most vivid tones are juxtaposed with calmer, more muted ones. It is an agreement between the inner and outer worlds that the artist achieves every time she approaches the canvas, a synergy between what the eye sees and what the inner world welcomes, without neglecting the passage through that conscious, and therefore more rational, part necessary to delineate the emerging sensations with greater clarity.

When she chooses to describe nature, Jagoda Lessel reveals her poetic, romantic soul, capable of letting herself be carried away and involved by the simplicity of a flower, a garden, a pathway moved by the wind, because after all, the artist suggests, these are the places where it is best to lose oneself, breathing in a direct contact with everything that belongs to the individual’s soul and that are often forgotten.

In Märchengarten (Garden of Fairy Tales) all her wonder appears in letting a sudden and unexpected visual contact evoke distant memories, those of childhood, a phase in which everything was possible and in which one could dream freely, without fear of falling to the ground in front of reality; here too the chromatic range is akin to the sensation perceived, that of being immersed in a pleasant world pervaded by the subtle magic of memory and a naïve way of seeing life.

And again in Windiger Weg (Windy Path) the yellows and reds convey that sense of movement of the foliage, that natural agitation that occurs when the wind comes to break the silence of nature, and it is precisely that instant that captures the attention of the artist who cannot prevent herself from conveying it on the canvas, recounting it and inducing the observer to perceive the subtle rustling and see the delicate movement that is generated. Jagoda Lessel is a member of the Professional Association of Austrian Artists and the International Art Associations Arte MIX and Bild Recht. Since 1999 she has participated in numerous national and international exhibitions, the latter in Hungary, France, the Czech Republic, Germany, South Korea (Seoul), Serbia, Italy, Slovakia, Turkey (Istanbul), Greece (Athens), Spain and Belarus (Minsk).