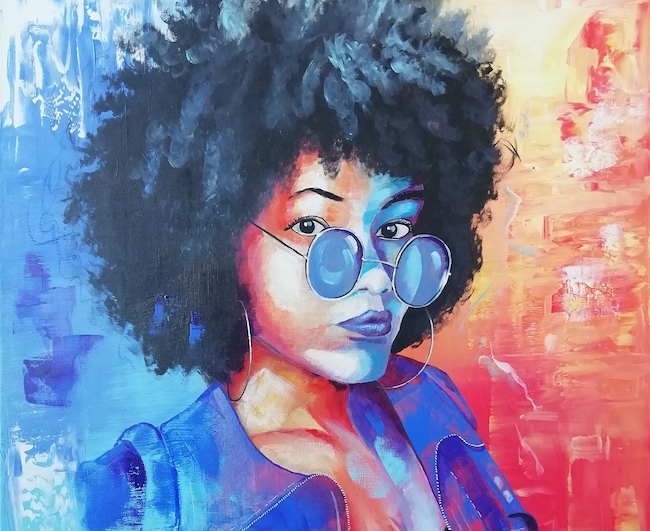 In the course of art history the woman has been depicted and described in many different ways and with different expressive intentions according to the author who chosed to make her the protagonist: she has been ethereal, divine, sinful, noble, aristocratic, suffering. This is because explaining the mystery under every facet was a challenge accepted by artists of all times and yet never won precisely because of the mutability and uniqueness of her approach to life. The artist of whom I will speak to you today chooses to make her the protagonist of her artistic production, representing her in her diversity, which however vanishes in front of her deepest essence.

The female figure has always had an irresistible fascination for artists, arousing in them emotions that led them to idealize her, giving her an ethereal but not very human, not very real aura, thus trapping her in a role that did not do justice to her complex inner substance. From Leonardo da Vinci to Botticelli, from Vermeer to Tiziano, just to name a few, the woman was immortalized as an inspiring muse, a goddess, a symbol to be worshipped; with the advancing of the centuries, however, there was a transformation of society and also of female freedom that began to reject the formal chains to which she had to adhere until shortly before and found a new way of expressing herself during the Belle Epoque period. At that point, consequently, the glance through which many artists observed her also changed, revealing her most sinful, most tempting, most libertine aspects. Tolouse–Lautrec, Gustav Klimt, Egon Schiele explored the carnal aspect, but always subordinated it to their feeling, to their perception of those bewitching sirens in front of them. Apart from a few rare cases such as Artemisia Genileschi, Fede Galizia and Elisabeth Vigée Le Brun, before the nineteenth century there were not many women-artists, so it was not possible to have an interpretation of femininity in its most real, more daily, more ordinary meaning. But then the times changed, women became emancipated from the role that society attributed to them and the twentieth century saw the birth of undisputed pictorial talents who gave an unprecedented point of view on an unexplored feminine world, often filtered through tragic experiences and suffering that formed the basis and focal point of their production. From Frida Khalo to Tamara de Lempicka, from Suzanne Valadon to Margareth Keane, the twentieth century saw the affirmation of these talents who were not only great painters whose works have become icons of that century, but also great women who showed all the fighting and rebellious spirit of those who need to make their voices heard. The German artist Anja Ziegler, through a soft and suffused style poised between Realism and Expressionism, explores from work to work the complex world to which she herself belongs and which therefore becomes easier to decipher, to interpret, not to idealize, choosing a cosmopolitan point of view.

She describes and narrates women from all over the world, each with her own traditions, with her own way of adorning herself and caring for herself on the basis of the habits of the place where she grew up; different, therefore, and yet similar in essence, with that mixture of sweetness and strength, of calm and aggressiveness, if necessary, of shyness and shamelessness that make the female universe an unsolved mystery for men, but a terrain in which women can understand and sympathize.

She portrays figures to whom she often does not attribute a symbolic title but rather distinguishes them with the names of the protagonists in order to underline and highlight the individuality and uniqueness of their personalities, which are revealed and amplified by the strongly Expressionist tones chosen to make their souls, their emotions pulsate, that perfect accord between the fragments of the image captured by Ziegler and the sensations that are generated from that instant and that outline their approach to life and their natural reaction to events.

The Egyptian Amunet, the Japanese Sachiko, the African Nubia, are only apparently different for the color of their skin and the clothing that distinguishes the place to which they belong, declensions of an essence that unites them, as well as their expressions, their sensitivity and their feelings are similar, close precisely because they are linked to an emotionality that has no race, color or religion, it is simply part of a multi-faceted and delicate universe in which every woman gets lost and from which she also draws the strength to lift her gaze, to find the pride and courage to assert her personality and will.

The work No represents a symbol for the female world, that ability to impose a choice, sometimes even with excessive force that only in some circumstances is able to manifest itself, necessary to defend herself or to take the autonomy, independence and the right to free herself from the social chains that too often still imprison her; but it also wants to be a stance against the violence that is consumed in every corner of the world against women.

And again, in Together is better, the artist underlines the importance of solidarity, friendship, support and sharing that the woman needs so much to feel understood, because only another woman like her can understand fears, insecurities and fears, and by virtue of that awareness help her, and help each other, to have a more serene, more light-hearted look, by downplaying and laughing together about the vicissitudes of life. Each canvas is surrounded by a suffused, ethereal atmosphere, as if Anja Ziegler wanted to highlight only what is essential, only the expressions, the faces of her protagonists, leaving in the background the task of narrating the true colors of their interiority, the feelings that come out and that envelop them according to the moment they are living, sometimes more melancholic, sometimes more dreamy, and others more impetuous. Anja Ziegler, artist since ever, has an academic background that has allowed her to be noticed by experts and winning important painting prizes from a very young age; over the years she has participated in many collective and personal exhibitions both in Germany and in other European countries, she has been the protagonist of television broadcasts on art and her works are included in important international publications.