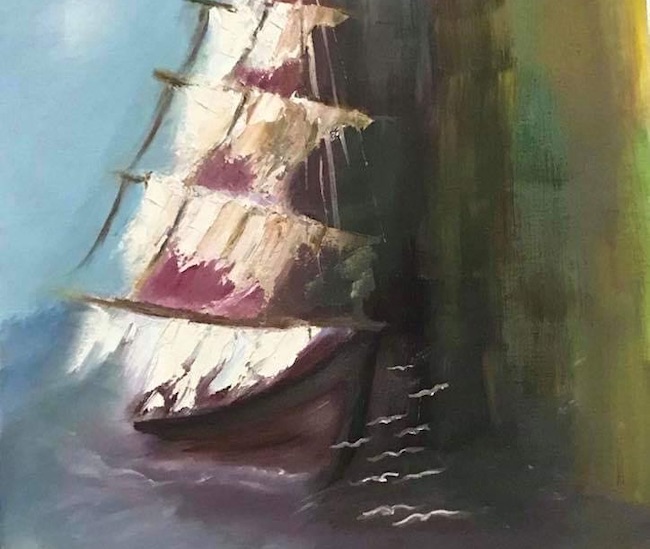 Art often presents itself as an interpretation of reality, a vision filtered by the feelings of the author of the artworks and that through the ability to express emotions on the canvas tells his mood, impressions, his personal way of being and approaching existence. In the works of today’s protagonist shines through all her ability to look at the present while dreaming of an ideal moment towards which to strive.

Zahraa Altaie, an Iraqi from Nasirya, began painting as a child in those heavy years of war with Iran, but this did not prevent her, like many of her fellow countrymen, from pursuing their dream and seeking in art a way to overcome the ugliness of the conflict to rise towards an ideal world to aspire to. Iraq is a country with a long cultural tradition, although it is not very well known in the West where it has only recently arrived, which on side extends its hand to traditional Ottoman iconographies but on the other has had a flourishing and lively connection with the European avant-garde as well as it is currently linked to the social issues of the contemporary period. The dictatorship first and then the embargo, did not prevent the government authorities from promoting artistic expression by founding in the second half of the Twentieth century the renowned Academy of Fine Arts in Baghdad which, especially in the decade between the sixties and seventies lived a period of openness to the Western world that allowed artists to come into contact and confront the rest of the world art scene. It was precisely in that period that were born the three main artistic currents from which the subsequent personalizations of future generations developed: the Group of Pioneers, led by Fa’iq Hasan and very much linked to the nineteenth-century style of Ottoman painting, the Baghdad Group for Modern Art, led by Jawad Salim, and the Group of Impressionists, led by Hafiz al-Durubi. In the period after Sixty-eight, politics began to strongly suggest the need for the birth of a new artistic movement, that of Nationalist Realism, according to which art was to be a support for the Arab question and therefore shoul have been easily understood by all. This was the reason why Abstractionism did not have much hold on the Iraqi artistic world and why the figurative tradition had a greater depth.

It is precisely Oneiric Realism the style that Zahraa Altaie chooses, who in the act of painting does not limit herself to tell but mixes her need to interpret the present of a people that is in perennial struggle, first with the outside, then within its own borders, and finally with the government that tends to hide and burke actions and reactions against those who, man or woman, want to make their voice be heard.

Altaie‘s works describe a world divided between objective reality and the dream of a well-being and a peace that cannot but turn into hope and tendency to search for a happiness that has been eluding for too many decades; she courageously recounts fundamental moments in the path of freedom in her country and she does so with delicacy but also with determination not to leave some episodes in silence, she softly represents the harshness of reality that she lives every day and that cannot help but inducing her to desire an ideal day when everything will be different.

In Basrah artwork she highlights the poverty of a people who live in a territory rich in oil but who, due to the corruption of the government, are forced to count murders and killings; this is why the Altaie represents a female face that seems to have overcome a sad and painful moment, narrated by the woman below in a moment of despair, as if she were remembering a distant fragment from which she recovered, healed her wounds and raised her head without forgetting what her eyes have seen.

Just as in October revolution where she reveals a tragic episode of that revolution in which women also participated and were hit with tear gas to silence their presence; the girl depicted in the painting is Shaddam, Queen of Sumer, a region of lower Mesopotamia corresponding to present-day Iraq, who taught the world to read, therefore an icon of how fundamental the female figure was in the most remote past of a people who seem to want to forget the importance she actually had. Zahraa Altaie tackles major social issues and does so with a special ability to soften the contexts through her realistic touch that tends towards idealism, that of rebirth, of dream, of looking towards a positive change that sooner or later will occur.

In the canvas Baghdad and the war the look of the protagonist woman is lost in the tears caused by the war, in the memory of broken lives and affections torn away, and however Altaie leaves the door open, through the soft shades of the cloudy sky that surrounds that face, to a chance of survival, of getting out of that ugliness to start again.

The theme of hope and rebirth is tackled in the artwork Mercy in which the blessing that comes from an almost completely dry trunk, appears as a lifeblood to revive from an experience that must necessarily be left behind, not forgotten but at the same time not dragged into a present that needs to become a new beginning, a new page. Zahraa Altaie has taken part in many international exhibitions in Baghdad, the most important of which were the Husseini Obsession exhibition and the Spring Festival 2018 at the Babylonian Cultural Centre; she has also taken part in artistic events in Istanbul, Cairo and Tozeur, and has met with considerable approval from the public and from professionals.