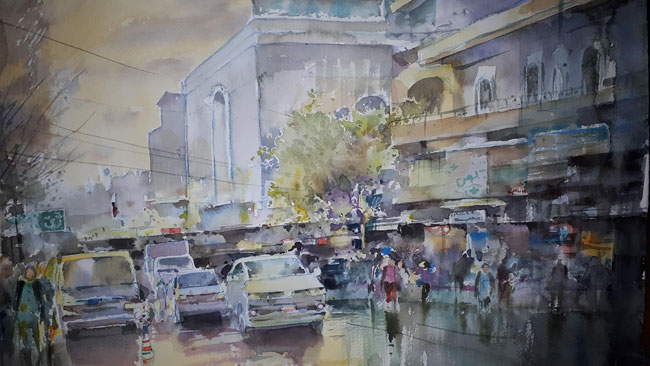 The first protagonist of the International Edition of this column is an extraordinary watercolourist of Kurdish origin but naturalized German, in fact he has been living and working in Nuremberg for many years. His talent in watercolour enabled him to be noticed and appreciated by collectors from around the world, let’s go and discover more details about him.

The technique of Impressionism has marked the first fundamental transition from Classical painting, linked to traditional standards and well defined on the subjects and on how to represent them, to go toward an innovation that opened doors to all artistic movements of the late nineteenth century, from Divisionism to Pointillism passing through Symbolism, and then from the early years of twentieth century with the vanguards of Futurism, Cubism and Fauvism. In this moving panorama french artists of the late nineteenth century draw a basic groove that turned base for all what came after. Their choice was mainly freedom of expression, absolving the dogma of painting interiors to find the pleasure in painting nature, open-air, under the light of the day; for being able to replicate the many facets of reality with the brightness of the landscape en plein air, they choose a way of painting consisting of very short strokes, small touches of color that shades through which shades are essential for faceting and at the same time define the full image, better visible moving away from the picture. The artist Lala Abde falls right in the current of Neo-Impressionism, which updates all the concepts of masters of the past to tell today’s world through its feeling, its great poetic sensibility emerging on the vibrant landscapes described in his canvases.

Likes to represent nature, the beautiful and enchanting glimpses of his country, Iraqi Kurdistan, from which he has turned away while keeping alive in memory rivers, forests, the pristine beauty of parks and small villages but also the traffic and the palaces of his hometown, Sulaymania. The distinctive feature of Lala Abde is the choice of watercolor, which under his masterful touch becomes poetic rhyme to define the emotions related to slow time, the silence of the woods, to the flow of waters, natural rhythms that mark the changing seasons and too often in contemporary reality man forgets to contemplate.

His love for nature joins to the fascination of the cities with their sounds, their noise, their breathtaking rhythms, buildings that tell of moving lives, dynamic solitudes in the multitude that if it’s true that they confuse and alienate the contact with the simplest emotions, on the other hand they whisper a continuous coming and going of people, meetings, trips that form the present existence. The brushstrokes are delicate and nuanced, the shades are soft, earthy and light at the same time, precisely as a result of the choice of watercolor as a means of expression; the scenes reproduced are lively but also shrouded in a time not time which develops, detail by detail, as a choral arrangement that captures the viewer’s eye and brings it inside those landscapes, peaceful, relaxing.

The final image is a lyrical charm, an orchestra of slight but vibrant tones that tell, carry, in the inner world of an artist of rare sensitivity, with a strong ability to lay bare the their emotions, fed by memories, and to tell them a story through images with the simplicity of nature.

In the artwork Woods for example, appears all the nostalgia that Lala Abde feels for those enchanted places, far away in space but so close in his emotions that lead him back in time; the rarefied atmosphere makes that landscape magical, just slightly moved by the wind, the colors distinguish a autumn weather, almost reassuringly with those solid trees that surround the mobility of the ground below.

In Qashan’s River the impression is even stronger, more effective, and even if borders are less defined, the final image looks more marked out, more detailed in spite of the slow movement of water and the sliding of clouds in the sky; it is precisely the idea of movement to characterize the artworks of Lala Abde, that uncommon ability to give consequentiality to a freeze frame as if he he was already foreseeing the next moment, the following minute to that in which the his eyes have chosen to capture the panorama.

And dynamism becomes fundamental in the representation of city scenes of Sulaymania, city where everything seems to accelerate the rythm, from the car on the street to people walking and cycling, while chasing the time runs away, taken by things to do and waiting for the return to their homes, when they will slow the throb of the everyday life.