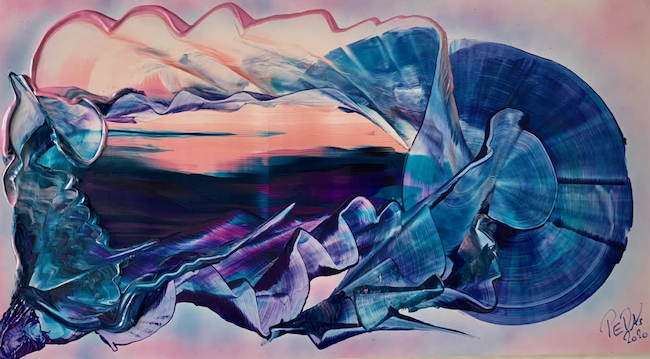 The approach to art is varied, personal, almost intimate with the canvas, a dialogue that each artist undertakes and which tends to characterise them throughout their career; in some cases the artwork is a clear manifestation of a thought, of a point of view that unfolds clearly, while in others the image that emerges is hermetic, without a precise form because it aims at the essence. Today’s protagonist, on the other hand, manages to instill in the observer the optical illusion of being in front of an abstract representation while concealing within himself the memory of something tangible and real. Let’s find out why.

Abstract Expressionism is often linked to the United States, because the movement was actually born in New York in the 1950s by will of Jackson Pollock, who was able to bring together artists who used different styles and expressive techniques, although they were all able to make the canvas pulsate through colour and non-form; however, this current also spread to Europe, in reverse order to the previous avant-garde movements that saw the light in the old continent and then extended with modifications and transformations to the Americas. Above all, Germany was the birthplace of one of the most important and significant exponents of Abstract Expressionism, Hans Hofmann, who was able to combine the themes of German Expressionism, that innate ability to transform emotions into colours and to overcome the destabilisation and loss of certainties caused by the world wars, with the affirmation of the predominance of essence over form, which this great master manifested through a range of bright, intense, sunny colours, albeit within an almost geometric rigour of line, as if his painting were to become an enthralling cue to escape from a sad and desolating reality, that of the memory of the devastation of war. For all the exponents of Abstract Expressionism, the watchword was communication, letting their emotions materialise on canvas on the basis of their individual feelings, a consequence of the natural inclination of each one of them, and this was the key that allowed this movement to gain consensus both from the public, who appreciated its instinctiveness and ability to touch inner chords without representing images known to the eye, and from other artists who felt the same need for freedom of expression. The ability to narrate sensations freely and without predetermined schemes fascinated the creatives who, in Europe too, adhered to the movement, generating an important spread of the painting movement, particularly in central European countries such as Germany and Austria. Peter Carl Daurer, an Austrian advertising architect with the passion for artistic expression, personalised Abstract Expressionism giving life to an intense, special creative mode in which he managed to mix his professional experiences to create artworks in which form is enveloped by non-form or, vice versa, the forme insinuates itself and confuses the latter, as in a game of mirrors in which everything is as unreal as it could be real.

Daurer uses the spatula to spread a dense, almost material colour, which nevertheless appears evanescent, light, as if he wanted to give relevance to those emotions, as if those sensations could not be delimited by the two-dimensionality of the canvas but needed to escape, to gain space towards the observer, towards an exterior that transforms them into something light, as in fact everything that has to do with interiority is, but at the same time solid because concrete, incisive, strong.

At times the chaos seems to want to escape and overwhelm everything it encounters, and so the colours are contrasting, streaked and mixed together as if they were to tell of a moment of enthusiasm, of gaiety, of fun that explodes, that overwhelms the observer, attracting him into the vortex of sensations that the artist wishes to communicate; at other times the tones chosen are calmer, meditative, slow precisely because some sensations, some thoughts need to be held back in order to be fully understood, to consolidate inside in order to take on consistency and relevance once they manifest themselves.

But Peter Daurer is not only a narrator of emotions; he is also a pictorial magician capable of revealing and concealing, of giving the optical illusion of being in front of an image that the eye knows without, however, being certain of it, because the material and dense reliefs of colour often envelop and frame evocative expressionist images in which the indefinite becomes defined even though it takes on unreal hues.

Thus the sinuous curves of the colour, applied with a palette knife, draw the eye towards an imaginary and romantic oceanic sunset; or the thin material lines in yellow ochre on a blue background instil in the observer the sensation of being in front of an unreal constellation capable of transporting him into the dimension of dreams, of the link with a universal design that escapes the contingency in which human beings live; just as a two-tone colour scheme gives the impression of being faced with the oppositions of life, with the double option between positive and negative, with the diversity of points of view in which every aspect, every event, every happening, can take on different meanings and can lead towards solutions and paths that are distant from each other on the basis of the choice made at the moment in which one finds oneself at that crossroads, at that possibility that is apparently similar but in reality divergent in its result.

Peter Daurer seems to want to explore the folds of the human soul through a painting that is both instinctive and meditated at the same time, because the colours need to be unravelled, spread on the canvas by virtue of that secondary, subsequent gesture during which the artist unfolds and generates curves as if they were concepts, words needed to consolidate the flow of thought. Peter Daurer also manifests his unstoppable creative impulse by making jewellery from natural materials and design furniture such as tables and lamps for which he uses recycled materials. He has taken part with his artworks in many group exhibitions throughout Europe and in the latest innovative virtual exhibitions in New York and Miami, achieving great critical acclaim and recognition.