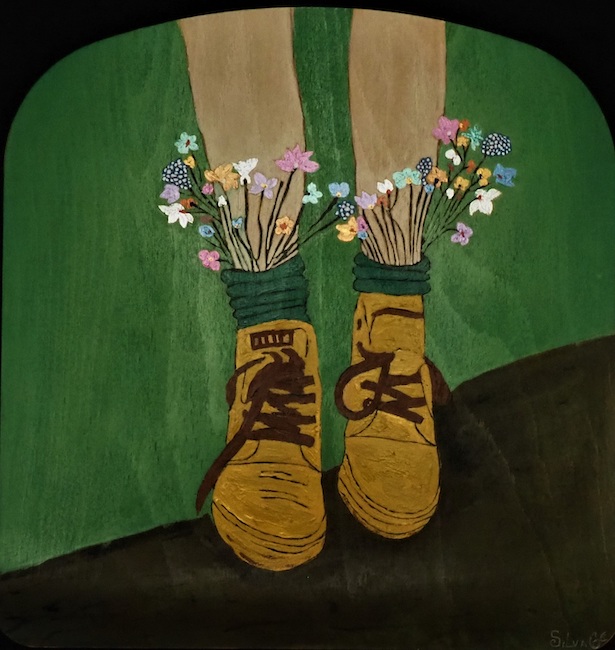 Very often the style of contemporary artists is part of the cultural heritage of the country from which they come from, testifying how the past is a guide and a basis for a present that cannot help but connect, even if re-actualized in the traces previously marked to create more open approaches to the contamination between different languages. The artist I am telling you about today is inextricably linked to one of the most incisive currents of the early twentieth century of her native country, let’s go and find out how.

Between the end of the nineteenth century and the beginning of the twentieth century, the whole Europe was invested by an artistic movement that celebrated esthetical sens, good living and beauty, but above all the importance of artisan creativity on mechanization and serial reproduction that was becoming established in that period. That current took different names from country to country: in France it was called Art Nouveau, in Spain Modernism, in Germany Jugendstil and in Austria it manifested itself under the name of Vienna Secession. The need to recover delicate and soft forms, almost sinuous, spread not only in painting and sculpture, but also in architecture, furniture, jewelry, lighting, especially in Austria the Secession movement theorized and hoped for a total art, in which all creative manifestations interacted and merged, thus excluding the sectorialization of expressive forms. The greatest representative of Vienna Secession was Gustav Klimt who, with his delicate and finely detailed figures, using a classical yet incredibly modern pictorial touch in the final result, had the ability to transport the observer into a oneiric, dreamy world, full of colour and light, as evidenced by his golden age that consecrated him to immortality. The attention to detail meticulously described and the vivid colours applied in a clear way, almost without nuance, characterize the artistic production of the Bulgarian Silvia Guenova, SilvaGe in art, and Austrian naturalized, graduate in theatre direction but with a passion always cultivated for painting, which is inextricably linked to the Vienna Secession style, enriched by the contamination with Surrealism, the most classical one, the one most akin to the contemporary inclination to observe the outside world and meditate on its relative truths.

Her most aesthetic side is the one that is revealed in artworks such as Blumen (Flowers) that decorate the stockings and skirt of the protagonist of the painting, whose face is not seen but the observer’s attention is directed by SilvaGe only on a flirtatious detail, as if to emphasize that in existence there is also a need for lightness, carefreeness and attention to aesthetics sometimes as an end in itself, without having to ask too many questions.

The same theme is taken up again in Tanz (Dance) in which the artist recounts a moment of fun, of popular celebration, a playful juncture within which escaping, not thinking about anything but the present, linking to the simplicity and immediacy of the way of life of the past perhaps less full of existential complications than in the contemporary era.

Complications and questions that SilvaGe’s sensibility cannot ignore, however, and which she openly manifests in other works in which Surrealism becomes a strongly present element, dominating almost, though never excluding the aesthetic taste of Secession that pervades her artistic production.

In this series of works, the artist’s style comes closer to the guidelines of the movement born in the early decades of the twentieth century, lines traced by André Breton after reading Freud’s treatise Interpretation of Dreams, than to the application that was made by the greatest masters of this style, Salvador Dalì and Max Ernst, among the main ones; at the same time, SilvaGe detaches herself from the pure oneiric to infuse her canvases with a concept, a more metaphysical tendency. The contrast between imagined figuration and meditation linked to contemporary reality gives rise to SilvaGe‘s entirely personal approach, which explores the doubts and perplexities of today’s society in a light and delicate way.

In the artwork Augen (Eyes) the synergy between the two styles between which the artist moves emerges in an incisive way giving life to an unreal atmosphere in which two entities are protagonists, apparently two bodies but in reality two souls, who meet and bond in the uncertainty of the future, in the insecurity and in the doubt of being able to really trust each other, here therefore appear the eyes of distrust, of control, of the need to look over one another in order not to be hurt. And yet the soft colour of the background, a water green whose uniformity is interrupted only by decorative elements barely hinted at in Art Nouveau style, seems to want to reassure the protagonists of the canvas, placing them in a time not time that constitutes a refuge.

And again in Mensch (Human) SilvaGe asks herself about the thousand shades, about the facets that we assume in front of different circumstances of life but that in reality belong to a single, complex personality through which we show ourselves to the world, sometimes with one face, sometimes with another, confirming Pirandello‘s thought on masks, on that one nobody and one hundred thousand that we can be on the basis of the events and the interlocutors we are in front of, until we forget who we really are.

The work Schnecke (Snail) tells instead of a contemporaneity in which slowness is forgotten, too much of a hurry is the rhythm of an existence that runs in pursuit of objectives, of economic well-being, of material ends to reach which one cannot afford to stop, to slow down to observe oneself inside in a more conscious and deep way; therefore the canvas wants to be a praise of a slowed down rhythm by virtue of which one can recover values, emotions, sensations that otherwise run away getting lost in the race of life. During her career SilvaGe has participated in numerous important group exhibitions in Vienna and throughout Austria.