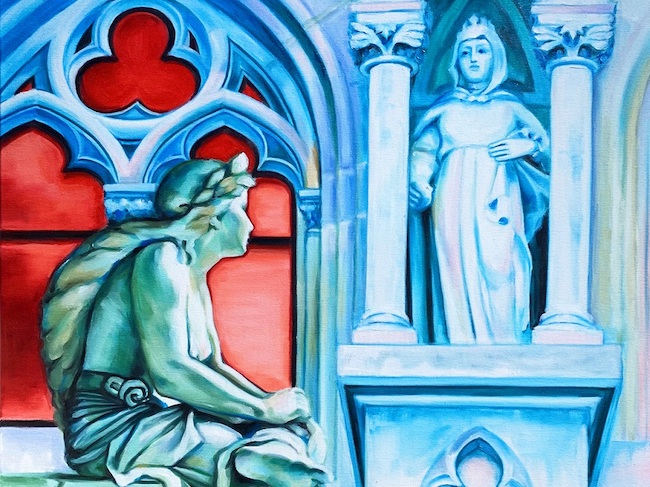 Everything that has been is a precious treasure to draw from, especially for many artists who base their expressiveness on the subtle bond that, in their vision, is necessary to give life to a return to that past that can, and must, coexist with the present. In the context of this research is placed the artist protagonist of today, capable of creating a middle world in which the two apparently opposite realities give life to new philosophical possibilities.

Zsuzsa Szvath, Hungarian by origin but German by adoption, develops from the very beginning of her school career the tendency to figurative arts that led her to choose academic studies at the Moholy-Nagy University of Art and Design in Budapest (MOME), during which she is fascinated by Classicism, that of Greek and Roman sculptures, but also by the Portrait of which she prefers the style of Impressionism and Realism, that will then be the basis and foundation of her very personal and captivating expressive language. Metaphysical Art was a fundamental movement of the first half of the twentieth century, often associated with Surrealism, but in reality divergent from it by the latter both for its different expressive intention – the reflection on man and his need to rediscover an order of things by tying himself to a distant past, on the need to go beyond the real contingency to find an ideal world as enigmatic in meaning and interpretation in the case of the first one, and the mysterious universe of the unconscious, of restlessness, of the nightmare deriving from uncertainties, deformations of objective reality that crowd into the human mind, typical of the second one – both because of the clear distance taken by the founder and maximum exponent of the metaphysical current, Giorgio De Chirico.

Szvath is strongly inspired by De Chirico’s Metaphysical Art precisely because of her characteristic of mixing the past and the present, placing classical figures, Greek divinities, portraying them outside their context, placing them in front of the entrances of contemporary buildings, or placed in the inner courtyard of a modern palace, giving the observer the sensation of being suspended in an indefinite time, between one before and one after that leads to the reflection on the importance of not forgetting a past that cannot fail to be the basis of contemporaneity because it is exactly from it that humanity was formed and evolved. However, the iconic images seem to be destabilized, incredulous in looking at the transformation of a completely different world from the previous one, that in which they lived, and for this reason they reflect, meditate on how to adapt to that new reality. In this sense of misadjustment, Zsuzsa Szvath reveals the anxiety and upset of contemporary man, who has lost his certainties and must find new ones without being able to draw on an important heritage, the cultural and historical one, because apparently too far from his impersonal present.

In the artwork Fall, the protagonist seems to ponder the best way to comply with that change, that fall in another era in which she no longer finds the usual references, in which the silence that surrounds her is no longer that of nature but the one of the city that often distracts from contact with the deepest self; and again in Memories, but also in Allegorie, the contemporary woman appears evanescent and at the same time attentive, concentrated towards the solidity of a history, of a remote civilization that has left such a deep mark that it seems more real than the ephemeral present, and for this reason can constitute a fundamental pillar. It is evident the importance that Szvath attributes to the solid cultural, philosophical, humanistic roots of more or less recent history, of which she underlines the need not to be forgotten before the essential cornerstones will dissolve, to maintain the strong link with the greatness of everything that was before and that belongs, indissolubly, to everything that is now. From an executive point of view, Zsuzsa Szvath‘s painting presents the typical characteristics of Metaphysics, flat and uniform brushstrokes, as well as the placement of the scenes outside of time and space, personalised however by the non absence of the human figure, indeed, in her paintings it is described the halfway between one yesterday and one today, seeking an improbable yet absolutely possible dialogue. Even in her other line of painting, that of Portrait, Zsuzsa Szvath does not renounce to underline her strong and inalienable link with the cultural past, immortalizing great women who have, each in her own way, left an indelible trace in the common memory, and she does this expressing herself with a more realistic approach.

The use of oil on the canvas and the narration of the faces appears evanescent, almost as if it were cameos dedicated to those great personalities, described in Impressionist style but with strong links with the more classic Realism, using much nuanced tones, sometimes barely hinted, almost impalpable and delicate to accentuate the importance of the role, of substance, that women like Marie Antoinette, Emilie Dickinson, Nelly Bly and many others, have had throughout history to the point of being able to change it. Zsuzsa Szvath has many solo and group exhibitions to her credit in Budapest, Bonn, Cologne, Hamburg, Munich, and has been involved in major events including the Women’s Museum in Bonn, in which she has taken part for three consecutive years. A unique artist incredibly sensitive to the importance of culture and the role of women in art and the world.